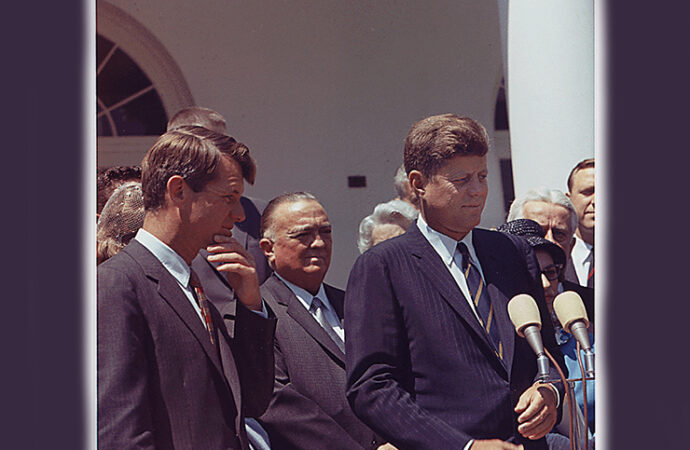 When did the civil rights movement go off the rails?

Neither brother was asked about nor used the word “reparations.” But during an August 1963 press conference, a reporter asked President John Kennedy about “special dispensation” for Blacks: “Mr. President, some Negro leaders are saying that, like the Jews persecuted by the Nazis, the Negro is entitled to some kind of special dispensation for the pain of second-class citizenship over these many decades and generations. What is your view of that in general, and what is your view in particular on the specific point that they are recommending of job quotas by race?”

I don’t think that is the generally held view, at least as I understand it, of the Negro community, that there is some compensation due for the lost years, particularly in the field of education.
What I think they would like is to see their children well educated so that they could hold jobs and have their children accepted and have themselves accepted as equal members of the community. So I don’t think we can undo the past. In fact, the past is going to be with us for a good many years in uneducated men and women who lost their chance for a decent education. We have to do the best we can now. That is what we are trying to do. I don’t think quotas are a good idea. I think it is a mistake to begin to assign quotas on the basis of religion or race or color, or nationality.
I think we get into a good deal of trouble. Our whole view of ourselves is a sort of one society. That has not been true. At least that is where we are trying to go. I think that we ought not to begin the quota system. On the other hand, I do think that we ought to make an effort to give a fair chance to everyone who is qualified, not through a quota, but just look over our employment rolls, look over our areas where we are hiring people, and at least make sure we are giving everyone a fair chance, but not hard and fast quotas. We are too mixed, this society of ours, to begin to divide ourselves on the basis of race or color.” (Emphasis added.)

That same year, National Urban League Executive Director Whitney Young proposed a 10-year “domestic Marshall Plan” for Blacks to make up for past discrimination. His board of directors opposed it. The president of the Pittsburgh Urban League chapter said the public would ask: “What in blazes are these guys up to? They tell us for years that we must buy (nondiscrimination) and then they say, ‘It isn’t what we want.'”

Five years later, Sen. Robert Kennedy announced his candidacy for president. He said: “I run to seek new policies — policies to end the bloodshed in Vietnam and in our cities, policies to close the gaps that now exist between Black and white.”

“Policies to close the gaps that now exist between Black and white”? In 1940, 87 percent of Blacks lived below the poverty level. By 1960, that number dropped to 47 percent, a 40-point drop in 20 years, the greatest 20 years of economic growth for Blacks in American history. Brown v. Board of Education, which struck down “separate but equal,” was not decided until 1954. This sharp decline in Black poverty preceded the Civil Rights Act of 1964.

John Kennedy was right. We cannot undo the past. But by teaching Blacks to see themselves as victims deserving of “reparations” from today’s white “oppressors,” we can certainly make the present and future worse.