Biden vs. Biden on ‘Is America a Racist Country?’ 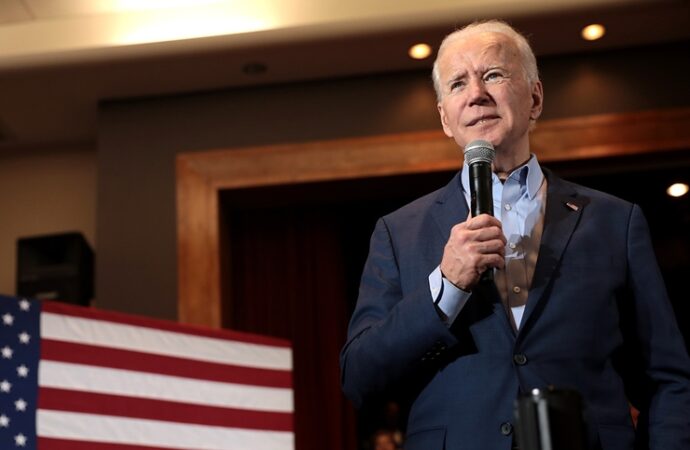 “Hear me clearly: America is not a racist country.” So declared Sen. Tim Scott, a Black Republican, in his televised rebuttal to Joe Biden’s address to Congress. Asked the next day what he thought of Scott’s statement, Biden said he agrees. “No, I don’t think the American people are racist.” Vice President Kamala Harris also agreed with Scott, “No, I don’t think America is a racist country.” What makes these rejections of the charge of racism against America significant is that Biden and Harris both seemed to say the opposite after Derek Chauvin was convicted.

Biden had called George Floyd’s death “a murder (that) ripped the blinders off for the whole world to see the systemic racism… that is a stain on our nation’s soul.” Harris had said much the same: “America has a long history of systemic racism. Black Americans—and black men, in particular—have been treated throughout the course of our history as less than human.” But which is the predominant view of Biden and Harris about the moral character of the country they were elected to lead?

Is it a vicious slander, as Scott implied, to call America a “racist country”? Or is America’s soul, as Biden and Harris said, so stained by “systemic racism” that this country has treated black Americans “as less than human” for the 400 years of her existence. Has America been a curse for the 40 million black people whose numbers have multiplied 10-fold since the abolition of slavery in 1865, and whose freedoms and material prosperity have grown accordingly? Or has America been a blessing to black people?

This is not just a gotcha question. For the clashing commentaries of Biden and Harris reflect an ideological divide within their own coalition over a most basic issue: Is America a good country? We have been on this terrain before.

Between LBJ’s landslide in 1964 and the breaking of his presidency in 1968, the Democratic Party had split into three factions, all at war with one another. There was the Lyndon Johnson-Hubert Humphrey establishment that controlled the presidency and the party machinery. There was the Robert Kennedy-Gene McCarthy-George McGovern anti-establishment and anti-war left. And there was the populist-right George Wallace bloc, containing millions of flag-waving blue-collar Democrats in northern industrial states and Southern Dixiecrats who detested the leftist radicals on cultural and patriotic grounds. That Democratic Party disintegrated in the convention hall and the streets of Chicago in August of 1968, opening the door to the GOP era of Richard Nixon and Ronald Reagan.

Today’s Democratic Party encompasses three similar blocs. There is the Biden liberal establishment that controls the media, the academy, the Congress, the administration. There is the Bernie Sanders-Elizabeth Warren-AOC progressive-socialist wing. And there is, today, a new militant and radical third force. Included in its ranks are Black Lives Matter, antifa, and protesters who burn Old Glory, tear down statues, monuments and memorials, assault cops, smash and loot stores and riot at will.

This is the “Abolish Ice!” and “Defund the Police!” faction of the party that detests the old America and favors open borders to alter it forever. This anarchic element is rendered moral sanction by journalists and politicians who share its malignant view of American history. The Biden-Harris statements on the conviction of Chauvin were tailored to pander to this crowd. Yet, in his address to Congress, Biden also made a statement that sounded like a Biden plagiarism of Trumpian nationalism: “All the investments in the American Jobs Plan will be guided by one principle: ‘Buy American.’ American tax dollars are going to be used to buy American products made in America that create American jobs.”

Biden is scrambling to keep one foot in every camp in his coalition by appearing to agree, at times, with them all. The problem: While one part of his party believes America is a good and great country deserving of loyalty and love, another believes America is racist in its soul—a land whose character is defined, as it has ever been, by white supremacy, white privilege, and white rule of people of color. This leftist rage, however, is partly rooted in urban myth.

Consider. Last year, in D.C., our nation’s capital, there were 200 homicides and 980 people shot, mostly blacks. How many were the victims of rogue cops or Proud Boys? Can you lead a country about whose history you profess shame? And how long will Americans follow leaders who appear to agree with those who hate what America was and, yes, what America is?

In 2020, Trump united the Democrats. But with Trump gone, Biden must do the uniting of his disparate party himself. And his need to behave, at times, like a believer in the racial indictment of the America he grew up in is probably not something Joe Biden can credibly and indefinitely pull off.