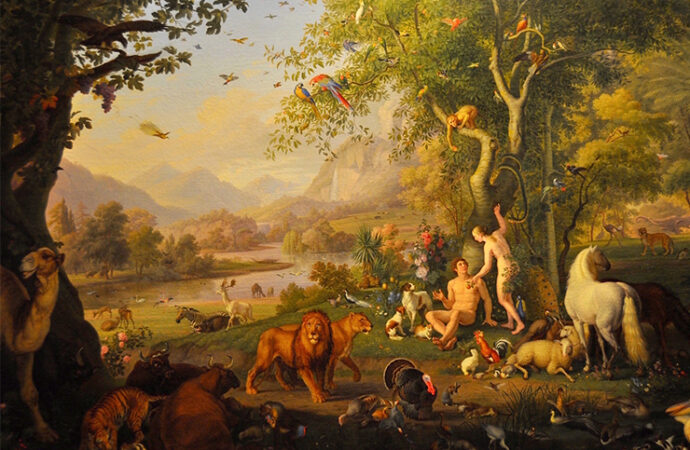 Recently I spent several days visiting my sister and her husband in their home in Western North Carolina. Both are retired, love gardening and landscaping, and as a result, have spent long and arduous hours making a mini paradise of their property. Here are flower beds, plots for growing tomatoes, zucchini, and other vegetables—this year they are adding corn to their repertoire of goodies—and azaleas laden with flaming blossoms.

As I sat on their deck looking down into their sloping yard and the valley beyond, I thought of the Garden of Eden and of Adam and Eve. It suddenly struck me that regardless of our religious beliefs, that story provides us with a wonderful metaphor for our humanity. Adam and Eve were living in paradise, they ate of the fruit of the Tree of Knowledge, their eyes were opened to sin, and God drove them from the Garden to earn their bread by the sweat of their brow. Since that original sin, disobedience to God or if you prefer, to the Way of Truth, has passed from generation to generation.

Looking at the beauty all around me that afternoon, beauty both natural and nurtured by the work of human hands, I wondered: What if we’re still living in paradise but because of our human imperfections we no longer have the eyes to perceive it as such? What if God didn’t literally drive human beings from the Garden but instead we expelled ourselves by dint of sin? And how many times will we go on trying to remake Eden?

In modern times, many people, not all of them motivated by religious faith, have tried to plant that garden again, to make a heaven on earth. We see these idealists in the American communes of the mid-19th century like Brook Farm and the Oneida Community. Karl Marx envisioned a “workers’ paradise,” and some of our contemporary radicals believe that if they just have enough power over the rest of us then they can bring equity to all, and, like gods, even control the climate.

In the last hundred years in particular, efforts to establish such a paradise have led to oppression, terror, more than a hundred million deaths, gulags and other slave labor camps, and cultural wreckage. Rather than creating a heaven on earth, men like Stalin, Castro, and Mao instead brought the fires of hell to their people.

The twisted ideologies of communism are responsible for this terror and slaughter, but it struck me as I looked into my sister’s garden that original sin, ignorance, and pride are the main culprits.

In regard to original sin, we ask these questions: Are human beings inherently good? Inherently evil? We can’t definitively answer those questions, but this we do know: Inside every saint—and the saints acknowledge this—is a nugget of wickedness, and inside every sinner—and the sinner may not know this—is a jewel of goodness, however small it may be.

Ignorance of possible outcomes also produces the wreckage of these utopian systems. Often our political leaders can have good intentions that produce unintended bad results.

Today we see this scenario played out everywhere we look. Our COVID-19 czars closed down our schools—some have remained shuttered for more than a year—and as a consequence, depression and behavior disorders among our young people have skyrocketed. Here in Western North Carolina my sister tells me she sees restaurant after restaurant advertising for help, but as one cafe owner told her, many employees are content to remain on the COVID inflated government dole rather than return to work.

Our current obsession with race provides yet another example of this incongruity. Critical race theorists, you might think, are working to reduce or end racism in our country, if it still exists, but their radical politics and viewpoints have instead eradicated all the progress we’ve made over the last 50 years and fed the flames of racism.

Finally, arrogance among our elites and among the leaders in communist countries around the world has contributed to the destruction of culture and law. Those who think they know best, who believe they have the answers for millions of people to make their lives happier and more fulfilled, and who are unwilling to tolerate those who disagree with them, typically end up as murderous thugs rather than as visionaries.

Our Founding Fathers were wiser. In The Federalist Papers, we find this observation: “If men were angels, no government would be necessary.” Those who wrote our Constitution knew that human beings were not angels, and so tried to allow for the maximum amount of freedom for American citizens while living under a minimal amount of government.

Unfortunately for most of us, we live in an age where some men and women believe themselves to be not angels but gods, with the power to dictate from the heights of Olympus how everyone else should live.

It’s time for these would-be deities and anyone who agrees with them to back down. They are a danger to us and to our humanity.