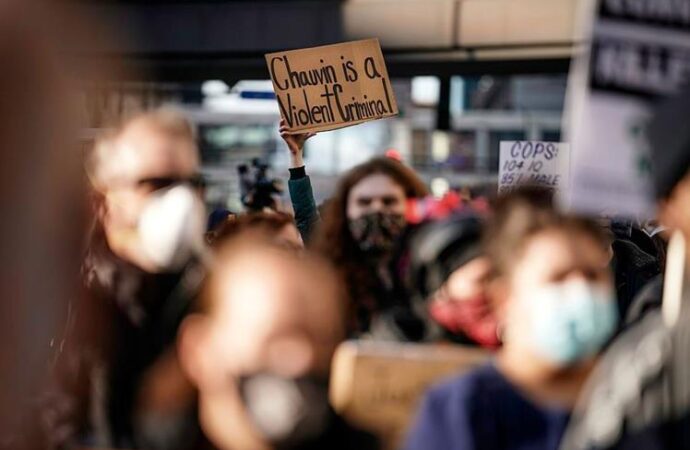 In the brilliant novel “The Bonfire of the Vanities,” author Tom Wolfe describes what he calls the intense media interest in covering “The Great White Defendant.”

A review of “Bonfire” explains:

The overarching theme of the book is the search for the great white defendant. The vast majority of defendants in New York City are minorities, arrested for killing another minority. The vast majority of the cops and prosecutors are all about the press and their careers. One drug dealer killing another drug dealer is not going to get you any attention; it’s a dog-bites-man story — no story. What you want is a man-bites-dog story. Therefore, subliminally, the police, prosecutors and press are always looking for a great white defendant who will make their careers.

Nobody, Wolfe writes, gets upset about massive media coverage of The Great White Defendant. Blacks enjoy watching media coverage of well-off white men, in this case a Wall Street trader, accused of serious wrongdoing, in this case murder. Guilty whites are used to perpetuate the systemic racism media narrative. And the media feel noble when pushing it. Win, win, win.

This brings us to the trial of Derek Chauvin, the white ex-Minneapolis cop convicted of murdering George Floyd, a Black man who initially resisted arrest. Cable channel HLN has covered the trial from gavel to gavel. When bumping in and out of commercial breaks, HLN displayed a graphic, accompanied by foreboding music, showing two fists tearing an American flag in half, with the caption “America’s Very Soul Is on Trial.” Black Lives Matter activist Maya Echols, in a since-deleted TikTok video, said: “If George Floyd’s murderer is not sentenced, just know that all hell is gonna break loose. Don’t be surprised when building are on fire. Just sayin’.” And Rep. Maxine Waters, D-Calif., says she is “hopeful” of a conviction, but if not, Waters said: “We’ve got to stay on the street and we’ve got to get more active, we’ve got to get more confrontational. We’ve got to make sure that they know we mean business.”

No, America’s “very soul” is not on trial.

An individual ex-officer, Chauvin, who is white, stood trial for allegedly murdering an individual suspect, Floyd, who is Black. Nothing more, nothing less. Indeed, the lead prosecution, in his opening statement, stressed that “the Minneapolis police department” is not on trial, just solely this defendant. Furthermore, many studies find cops more hesitant, more reluctant to use deadly force on a Black person than a white person. The facts simply do not bear out the Democrats’ and media narrative of anti-Black police “systemic racism.” According to The Washington Post, in 2020, the police shot and killed 18 unarmed Blacks. That represents one-quarter of 1 percent of the approximately 7,000 yearly Black homicide victims. And this does not include Blacks killed by police through other means, although the total is likely not much higher since most suspects killed by police are shot.

By elevating the Chauvin trial into a referendum on cops in general and on America in particular, the media and irresponsible incendiaries like Echols and Waters make violence more likely if the state had failed to convince 12 jurors of Chauvin’s guilt. Inevitably, as buildings and businesses burn, someone on the left reminds us that Dr. Martin Luther King Jr. called riots “the language of the unheard.”

The King quoters omit two things. First, at the time King said that, many doubted the credibility of investigations, given that whites ran the investigations. Today, most big cities have or have had Black mayors, Black police chiefs, Black prosecutors, Black leaders of city councils and Black superintendents of schools. Who, then, is not hearing the unheard? Second, King also called riots “self-defeating and socially destructive.” King said: “I will continue to condemn riots, and continue to say to my brothers and sisters that this is not the way.”

Waters voted to impeach then-President Donald Trump a second time for allegedly “inciting an insurrection” in Washington, D.C., on Jan. 6. If the state had failed to convict Chauvin, a distinct possibility given the state’s heavy burden of proof, would media similarly accuse Waters of incitement to riot?