Courage in the Face of Tyranny 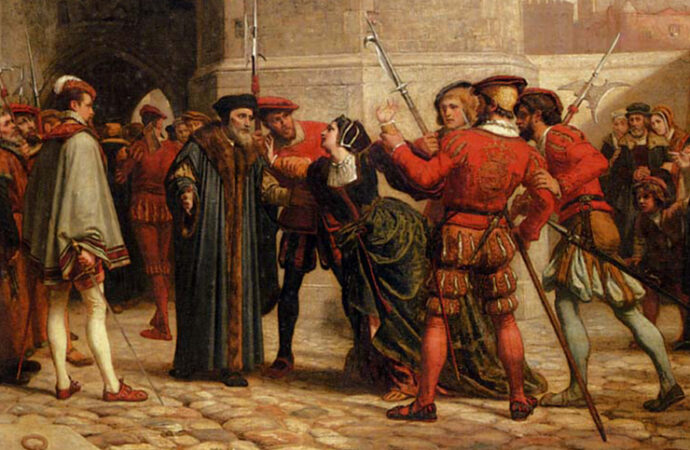 A Man For All Seasons is a film for our time.

In this classic period drama, Sir Thomas More (Paul Scofield), a brilliant writer and intellectual and former Lord Chancellor of England, refuses to approve Henry VIII’s marriage to Anne Boleyn, rejects his decision to break with Rome, and recognize the king as the Supreme Head of the Church of England. Though he seeks refuge in English law, More is eventually imprisoned, tried for treason, and executed.

What the movie doesn’t show are the events that occurred in the years following More’s death: the dissolution of the monasteries, with the monarch selling off monastic lands and buildings; alterations to the liturgy; demands that bishops and priests renounce their allegiance to Rome and join the English church; and the various rebellions against these policies which followed. A century later, these upheavals culminated in a bloody civil war.

In other words, England’s Catholic culture and the Catholic Church in England underwent what we today would call “cancel culture,” and more than a few hardy souls like Thomas More who were standing in the way found themselves imprisoned or executed.

More was a man of conscience who could not approve a proposition he knew to be false. He saw through Henry’s machinations, his lust, and his desire for a son in divorcing his first wife and marrying Anne, and More refused to accept the king’s wishes as a valid premise for cutting ties with Rome. He also understood the dire consequences for repudiating the king’s demands.

In a scene where More is discussing his ordeal with his friend the Duke of Norfolk (Nigel Davenport), More gives us the central reason for this refusal.

The Duke of Norfolk: Oh, confound all this. I’m not a scholar, I don’t know whether the marriage was lawful or not, but d—–, Thomas, look at these names! Why don’t you do as I did and come with us, for fellowship?
More: And when we die, and you are sent to heaven for doing your conscience, and I am sent to hell for not doing mine, will you come with me, for fellowship?

Others who love More and want him to live—his wife, his beloved daughter, a son-in-law, and friends—also pressure him to give way and obey the king, but More’s moral compass prevents him from doing so. At the end of his trial, a procedure foreshadowing the show trials of 20th century communists, More further explains himself: “I am the king’s true subject, and I pray for him and all the realm. I do none harm, I say none harm, I think none harm. And if this be not enough to keep a man alive, then in good faith I long not to live.”

Today some demand, as did Henry and his government ministers, that we go along with their attempts to tear down a culture beloved and dear to many of us. If we condone this demolition, we will, like the Duke of Norfolk, be welcomed into the ranks of the cancel culture crew for “fellowship.” If we refuse to join them, if we instead fight back against this destruction, we will be executed, not like Thomas More by ax and chopping block, but by our digital gallows and guillotines, by doxxing, by being banned from social media, and by being deplatformed, as has happened to Intellectual Takeout and other outfits.

And so we have a choice. We can join the gang of radicals now running rampant in our country. We can keep our mouths shut, close our eyes, and pretend as if nothing is wrong. Or we can fight back against the madness, knowing full well that, like Thomas More, we may well lose the war.

In his conflict with King Henry VIII, Thomas More believed that he had one unbeatable ally: God. Many of us today also believe in that Higher Power. Other Americans may not cast their eyes heavenward, yet they may still take comfort and courage from our Bill of Rights and natural law, for these are rights granted by no government but guaranteed to us by dint of our humanity.

In laying out his case to his daughter Margaret (Susannah York), More argues for using the law as a weapon in his defense, but adds these words: “If He (God) suffers us to come to such a case that there is no escaping, then we may stand to our tackle as best we can, and yes, Meg, then we can clamor like champions, if we have the spittle for it.”

What about those of us living through these crazy times? If we come to the place where there “is no escaping,” how will we react? Will we have the backbone and the courage, as did Thomas More, to resist falsehood and oppression?