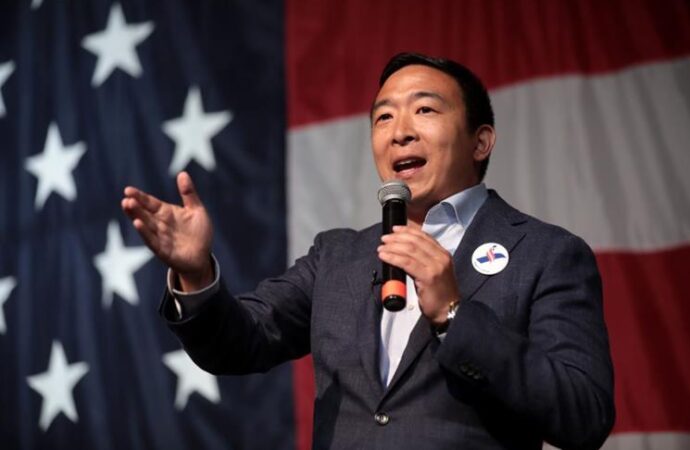 Former Democratic presidential candidate Andrew Yang continues to lead the way in multiple polls attempting to parse out a packed race for the New York City mayoralty. If elected, Yang will become the first Asian American mayor of New York City, and only the second minority of any description to hold the office, following David Dinkins.

Yang’s diversity credentials are apparently insufficient for Michelle Goldberg at The New York Times. In a recent op-ed, Goldberg complained that “there could never be a female Andrew Yang.” Her argument hinges on a few studies which purport to show that, as Goldberg puts it, “men are judged on their potential and women on their accomplishments.”

So now we’ve moved past the point where “just pick the best person for the job” is even a remotely relevant counter to calls for diversity, if it ever was in the first place. Now even having a person of color being the leading candidate for mayor of New York City is a scandal because he happens to be a man.

Simply put, grievance culture sells, and those looking to be outraged will appreciate Goldberg’s gender-based complaints. They will share it far and wide, spreading the idea that sexism, rather than communication styles or policies, is behind the rise of Andrew Yang.

But is it really? A look at the facts shows something different. While it is true that Yang is devoid of political experience outside of his 2020 dark horse presidential campaign, his resume is not particularly sparse in other areas. In fact, his credentials would seem almost ideal to appeal to progressive politicos.

Yang has worked as a corporate attorney, a tech entrepreneur, and as the vice president of a healthcare startup. He has also led multiple nonprofits variously focused on supporting recent graduates to be entrepreneurs or aiding existing startups in cities beyond the traditional focus of mega-corporations, as well as the promotion of his 2020 campaign ideas, such as universal basic income. This range of experiences seems well placed to address a laundry list of progressive concerns.

True, some of the women Goldberg profiles in her op-ed may be better qualified or suited to take on the particular challenges New York City faces.

The political process is not like any other job application process, however. Rather than interviewing with a few people, a politician is “interviewed” by hundreds of thousands, or millions. There is no corporate bottom line to protect, no precise job description. Each individual vote is an expression of a voter’s idea of how their locality ought to be run and the policies they would like to see, as much if not more so than a statement about the actual candidate or their personality.

It may be that both Yang’s policies and his personality connect better with New York City voters than do those of former MSNBC commentator Maya Wiley or former New York City Sanitation Department Commissioner Kathryn Garcia, two candidates Goldberg mentions in her piece. By the end of her article, even Goldberg begrudgingly admits there may be other issues rather than sexism at play in the New York City mayoralty race.

Why then does she and The New York Times bemoan that “there could never be a female Andrew Yang?”

Again, grievance culture sells, and many would rather focus on that.

Yang leads his next closest opponent 22 percent to 13 percent in a Spectrum News NY1/Ipsos poll and 26 percent to 13 percent over the same opponent in a Data for Progress survey. While these may be sizable leads in a crowded race, the election is still seven months away, and this will be the first year the primaries will use ranked-choice, instant-runoff voting, as opposed to the standard plurality voting of most elections. Even if Yang is a lot of people’s first choice, he may not prove to be their second.

The left will continue to eat their own until November, and well beyond. The fact that Goldberg tries to drag down an Asian-American entrepreneur and philanthropist in the name of feminism and social justice says far more about those political movements than anything its critics could.

Editor’s Note: The ninth paragraph of this article previosuly stated that Garcia and Wiley were the only two potential rivals to Yang for New York City’s mayoral race. They are both actively running, and are two among many candidates.