Sticking Up for the First Amendment 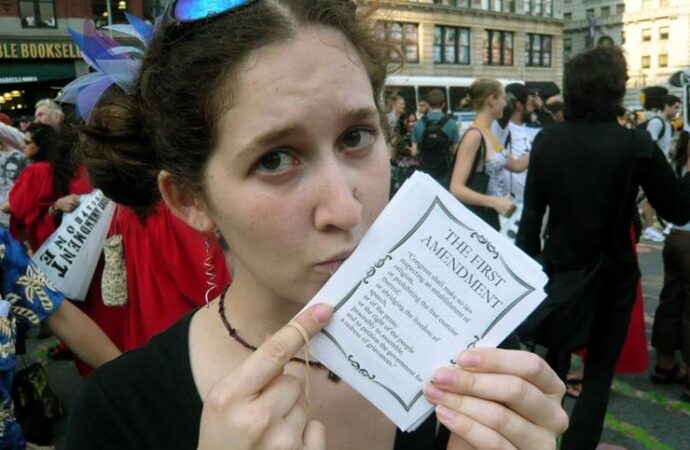 I can speak my mind.

I refrain from pushing my politics on others, but if asked I will tell you I supported the Trump-Pence ticket and explain why. If asked my opinion of the Biden-Harris administration, I will explain why their policies—open borders, the creations of massive amounts of federal debt, and divisive racial politics—may prove the ruination of our country.

Many others lack this luxury. Questioning mandatory Critical Race Theory (CRT) training sessions at the office may soon find you filing for unemployment. Speak out against such indoctrination in your child’s school, and you may become a pariah at your local PTA meetings. In “The Miseducation of America’s Elites,” liberal columnist Bari Weiss writes of speaking with wealthy parents whose children attend exclusive private schools. These parents meet in secret to discuss the school’s CRT curriculum and its effects on their children. They’re afraid to protest directly to the school for fear that their opposition might adversely affect their children’s grades.

In wealthy Loudoun County, Virginia, a group composed mostly of teachers and former teachers compiled a list of parents whom they suspected of opposing CRT. The members of this private Facebook group, “Anti-Racist Parents of Loudoun County,” were collecting information on those objecting to CRT with the intention of coercing them into meek acceptance of their pet programs.

These assaults on our freedom of speech are unrelenting. Refer to COVID-19 as the Wuhan flu or as the CCP (Communist Chinese Party) virus, and you might fall victim to a cancel culture mob. If someone asks if you plan on receiving the vaccine and you answer in the negative, they’ll attack you without first ascertaining whether you might have a medical condition that gives you pause. Claim you are offended by CRT training, like one white teacher I know, and you’ll come under fire.

Some Americans know what this silencing means and where it will lead. Among us live Czechs, Hungarians, East Germans, Poles, and Russians, people who have endured communist dictatorships. They know first-hand what it means to live in a place and time where they were forced to self-censor, where they always had to be careful with their words.

More recently, the Chinese who have escaped communism remind us of the importance of free speech. On Election Day last November, my daughter was driving through Scranton, Pennsylvania. On a bridge above the highway were some 20 Asians, all holding up Trump signs. Likewise, when I was in Washington D.C. for the Jan. 6 rally, I was struck by the large number of Chinese-American Donald Trump supporters, all of them handing out literature about their former country and the dangers of communism.

So what’s to be done? How do we defend our First Amendment rights?

To begin with, we must recognize that silence gives consent. To remain silent in the face of oppression is to allow that oppression to grow and thrive.

Parents must remember they are the primary educators of their children, never to be replaced by the state. If your children’s schools introduce a CRT curriculum or some other program that smacks of anti-American propaganda, you must either protest directly or remove your child from the offending school.

All Americans must guard our Constitution. The Bill of Rights, the first 10 Amendments to that document, are not laws laid down by a government, but are the natural rights of all men and women. When our government attempts to limit or take away those rights, we are obligated to protest.

In the last year, we have seen those rights eroded by mandates from governors and mayors on account of COVID-19. We have seen businesses closed, many of them permanently, churches and schools shut down, and freedom of assembly largely denied.

Many of us followed these orders, but those who protested are a glimmer of hope for our country.

In “Celebrating One Year Of Rebellion Against Dr. Fauci And The Government’s Arbitrary Tyranny,” Christopher Bedford, a senior editor at The Federalist, gives an amusing and important account of his neighborhood’s refusal to go along with governmental edicts. He also shows us how across the country, especially in rural areas, men and women simply disobeyed many of these diktats, getting together for parties, keeping bars open, and holding church services. Bedford, his family, his neighbors, and millions of other Americans clearly reasoned that they could take better care of their physical, mental, and spiritual health than could the government.

The good news is that more and more Americans are becoming sick and tired of cancel culture and government controls. Like Charlton Heston and Christopher Bedford, they are beginning to think for themselves and disobey petty tyrants.