Is Biden Reenlisting in the Forever Wars? 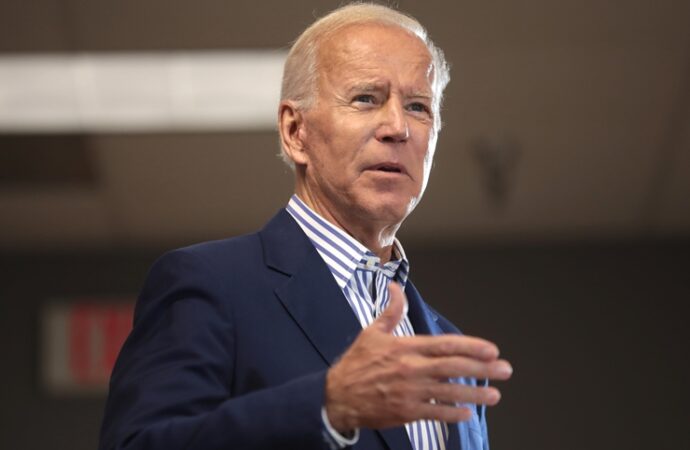 Thursday, in its first military action, the Biden Pentagon sent two U.S. F-15Es to strike targets of Kataib Hezbollah, an Iranian-backed Iraqi militia just inside the eastern border of Syria. The U.S. strikes were in retaliation for a missile attack on a U.S. base in Irbil, capital of Iraqi Kurdistan, which killed a contractor and wounded a U.S. soldier. “We’re confident that the target was being used by the same Shia militia that conducted the strikes,” said Defense Secretary Lloyd Austin.

But Democratic Sens. Tim Kaine and Chris Murphy want to know where President Joe Biden got his authority to launch attacks in Syria, where there was no clear or present danger to any U.S. troops.

Days before the U.S. strike, Kataib Hezbollah issued a statement denying any complicity in the Irbil attack: “We absolutely did not target Erbil or the Green Zone and have no knowledge of the group that did.” Iran has also denied any involvement in the missile attack on the Americans. On a visit to Baghdad, Iran’s Foreign Minister Javad Zarif called for an investigation as to who is initiating the attacks inside Iraq. “We emphasize the need for the Iraqi government to find the perpetrators of these incidents,” said Zarif. Foreign Minister Sergei Lavrov said Russian forces in Syria got only four or five minutes’ notice that U.S. planes were on their way to a strike.

Bottom line: Those conducting these attacks on U.S. bases and troops in Iraq, provoking American counterstrikes, seek to ignite a conflict between the U.S. and Iran, and its proxies in Iraq and Syria. And they are succeeding.

Biden broke with former President Donald Trump on the latter’s decision to pull out of the Iran nuclear deal and impose “maximum pressure” sanctions to compel Iran to negotiate a more restrictive deal. But Biden has yet to reveal his own strategy or goals in dealing with Tehran. Is he willing to accept a return to the nuclear deal the U.S., U.K., France, Germany, China, and Russia negotiated with Iran in 2015? And if that deal is now no longer adequate, how does Biden propose to get Iran to negotiate and agree to a tougher deal?

The leverage we have are the sanctions Trump imposed. If Biden lifts those in return for Iran returning to the terms of the 2015 deal, he surrenders all of his leverage for a new deal covering Tehran’s missile development and aid to Shia militias in Yemen, Syria, Iraq, and Lebanon. But if Biden refuses to lift the Trump sanctions, Iran is likely to revive its nuclear enrichment program, give up on the U.S. and elect a hardline regime this year that could adopt a policy of attacking U.S. interests and personnel across the region until the Americans go home.

Six weeks into his administration, Biden seems in danger of being drawn back indefinitely into the forever wars of the Middle East.

In Afghanistan, under the terms of the peace deal negotiated with the Taliban in 2020, all U.S. troops are to be out of the country by May 1. Under that deal, not a single U.S. soldier has been lost in combat in the last year. If the U.S. announces, as some believe is likely, that we are not going to withdraw all forces by May 1, the Taliban, who control half the country, are likely to begin targeting the remaining American troops in the country.

Biden could then be presented with this Hobbesian choice: Flee Afghanistan under fire, or send more U.S. troops to protect those we left behind. Writes William Ruger, a veteran of the war and Trump’s nominee to be ambassador to Afghanistan:

“Keeping our troops in Afghanistan beyond the promised deadline is pushing them back in the Taliban’s cross hairs and indefinitely continuing an … unwinnable war, which has already cost more than $2 trillion and more than 2,400 American lives …

“Anything less than a full drawdown means that Afghanistan will become President Biden’s war. He will have to own the predictably terrible consequences of continuing a war that can’t be won.”

Looking at our 20 years of military intervention in the Middle East, since Osama bin Laden drew us in by bringing down the twin towers and hitting the Pentagon, what is on the asset side of our balance sheet? Two decades of fighting in Afghanistan, yet the Taliban enemy we ousted in 2001 seems today destined to retake power when we depart. Pro-Iranian Shia militia dominate the Iraq that we sent an army to liberate from Saddam Hussein. In Yemen and Syria, we bear major moral responsibility for two of the worst humanitarian disasters of the 21st century, and we are facing strategic defeats in both theaters.

In Libya, whose regime we helped to overthrow, Turks and Russians are fighting for control. And China, which stayed out of all these wars we started—or into which we plunged—has prospered in these 20 years as few other nations in modern history.