Individual Rights and Their Role in the Revolution 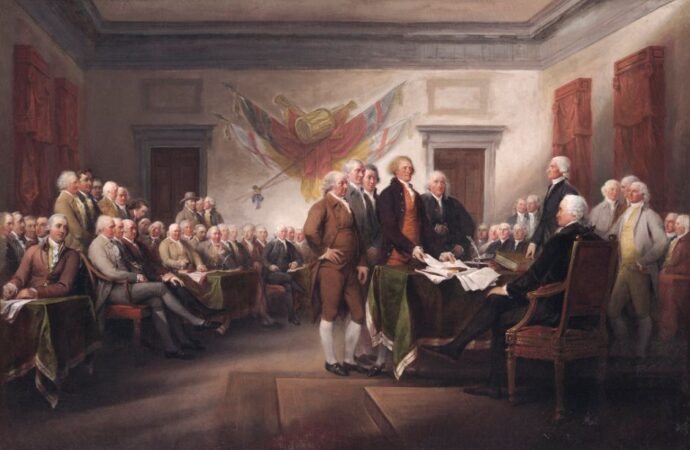 America’s Revolutionary Mind, by C. Bradley Thompson (Encounter Books; 584 pp., $32.99).
Thompson’s examination of colonial America’s natural rights political culture and the effects of the Declaration’s oft-quoted passage about unalienable rights is not likely to please members of the traditional right, and as such I consider it required reading. Thompson presents copious evidence that those who led the American Revolution and established American governments afterwards embraced Lockean views about inborn individual rights.
Thompson demonstrates that early America’s prevalent understanding of Lockean rights stressed their universality. This belief in universal individual rights, according to Thompson, superseded the Declaration and the case made therein for American independence. Although Murray Rothbard, Thomas West, and Michael Zuckert have made similar arguments, Thompson’s thoroughness makes the best case. Those seeking to disprove his argument will have to do more than just repeat that Edmund Burke, not John Locke, was America’s true philosophical founder.
The antebellum South’s traditional way of life and social hierarchies resembled European feudalism more than the Lockean individualism Thompson focuses on. Historian M. E. Bradford remarked that Southerners living in a society of unequal members could not have understood “all men being born equally” as we do today. So why did Virginia’s planter class feel obliged to begin statements of political belief with an incantation they did not accept?
Constitutional historian Forrest McDonald noted the influence of ancient and modern Europeans, as well as the Bible, on early American political thinkers. McDonald argued early Americans eclectically constructed their regime around these multiple references. Still, natural rights skeptics ignore Thompson’s exhaustively researched scholarship at their peril.
—