The Decline of the Art of Lying 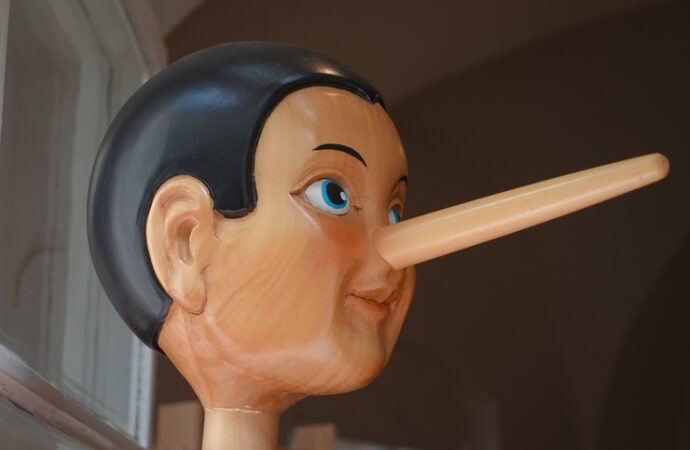 We live in an era of unprecedently widespread lying. Yet lying itself, is an art—albeit an unadmirable one—in decline in a decadent age.

Our leaders have set a spectacularly bad example. Former President Trump lied continually and shamelessly, as do his noisiest enemies and his successor. But they are bad liars—clumsy, unconvincing, and incredibly short-sighted, saying childish things that are easily exposed.

I have to admit that my view may be conditioned by my specialty as an historian. I am used to dealing with a higher class of liars: Nazis and Communists.   Not that they were nice, of course. But they at least put in the necessary work. They usually made an effort to sound plausible, to offer a structured, internally consistent alternative to grasping the real world.

Modern liars are just plain lazy. And all too many of them have what gamblers call “tells” that disclose that they are lying. Most often, of course, to revive the old joke, it is that their lips are moving. That of course, is hardly a purely contemporary defect; it was a notable weakness of the Kennedy brothers as well.

But that they are not very good at lying doesn’t seem to deter them. And all too often they get away with it. Why?

Four principal causes can be discerned. First, the continual hysteria that has become ever more characteristic of our society, over many years, but especially since the 2016 election. It becomes particularly visible when matters of race, politics, and Donald Trump surface. It reaches an extreme among the Hollyweird types; they cannot express themselves without outbursts of obscenities.

Second is the poor state of education. Things once well-known are no longer taught. Worse, our rotten public schools cannot teach people to read, or do elementary mathematics easily, much less pleasurably. The educational establishment has, in effect, blown up the bridges over which knowledge is reached. (Whatever they pretend, by the way, they don’t seem to teach “life skills” either; an amazing number of people are still taken in daily by con-games that are 500 years old.)

The left’s remedies for this are more propaganda against alleged “racism.” They also throw more money at the places that have signally failed to do what they were supposed to do, particularly institutions of higher education. Perhaps this is why modern journalism is so poor—the journalists have poor educations, especially in comparison to earlier print journalists and the first generations of TV newsmen, such as Eric Sevareid and Howard K. Smith. What seems to be lying propaganda on their part, can sometimes simply be an expression of ignorance.

A third factor is the increasing tendency toward sheer fantasy and outright disconnection from reality. A classic example of this is the attempt to submerge the violence of the summer of 2020 by referring to riots as just “protests.”

Closely related is the fourth element, which is the extreme development of ideological thinking, the accompanying constriction of thinking to deductions from doctrine rather than observation along with the exercise of skepticism. As most ideologies often have no connection to reality, this is not a promising trend.

There is a connection, here, with “neophilia,” a weakness for swallowing the new, or what is supposed to be new—it usually isn’t—which often takes the form of assuming that old ideas are bad ideas. That can be true, but it is not always so. Even when it is, there is a failure to recognize the obvious, if oft-neglected, point that every old bad idea was, originally, a new bad idea—which failed to encounter sufficient resistance.

All of these elements, by the way, can be seen on the political right as well as on the left, although the left is fantastically worse. And lies based on ideology have a strange way of switching sides over time.

But ideological thinking and the crippling of education also undermine the response of the right to the most dangerous lies the left advances. A case of this is afforded by some of the responses to “critical race theory” and its offspring, and the ugly 1619 Project’s attempt to redefine all of American history in terms of the allegedly central institution of black slavery. In this alternate reality the “real founding” of America was not the establishment of the English settlements, but the

arrival of the first African slaves in 1619 (if they were slaves, since at least some of them may have been treated as indentured servants rather than slaves). This is further embroidered with the insistence that American slavery was uniquely evil, and further, the claim that the American struggle for independence was waged to protect slavery.

All of this nonsense defies well-known historical fact. Slavery was not a uniquely American evil but a normal, if bad, institution in almost all societies above a very low level of development. The idea that the Revolution was launched to save slavery is also absurd. Abolition of slavery began in New England, the strongest center of the revolutionary cause, during the War for Independence. British strategy in the later stages of the war was aimed at reconquering the South precisely because British leaders wrongly estimated that fear of slave flight and uprising made it the soft underbelly of the patriot cause. That the British thought Southerners would give up easily to save slavery proved a classic piece of overoptimism.

Yet many people have dodged analyzing the damning facts, preferring to invoke their own sort of ideological thinking, pretending that America was “founded” in 1776 with the Declaration of Independence. The nature of the society that existed before, which is closely connected with why there was a Declaration of Independence, and how the American free society developed, is avoided. So is the slight problem that the revolution was not, originally, launched to gain independence at all (much less protect slavery), but to secure existing liberties by taming the intrusive British government that was menacing them. The patriots resorted to independence late and reluctantly, after more than a year of war when it was clear that nothing less would serve. Being, mostly, up-to-date Enlightenment thinkers—affiliated with the British, not the French enlightenment—they, when forced to form a new government, naturally introduced some generally popular reforms, and substituted a constitutional representative republic for the defective British constitution that had failed to protect their liberties.