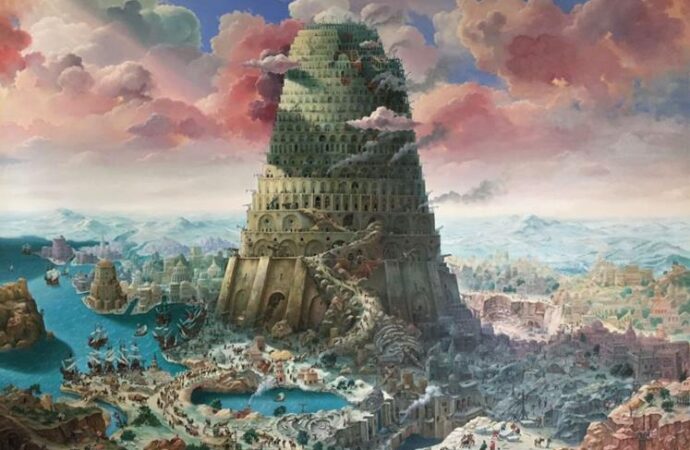 In C.S. Lewis’s novel about totalitarianism, That Hideous Strength, we find this line, “Qui verbum Dei contempserunt, eis auferetur etiam verbum hominis,” which translates, “They that have despised the word of God, from them shall the word of man also be taken away.”

This line occurs in a passage during which an elite who dreamed of making themselves masters of mankind find themselves under the “curse of Babel,” unable to speak anything other than gibberish.

George Orwell also addressed the dangers of mangling a language into meaninglessness, writing, “If thought corrupts language, language can also corrupt thought.” He vividly demonstrated this idea in his dystopian novel 1984, writing that the government of Big Brother has declared that “War is peace,” “Freedom is slavery,” “Ignorance is strength,” and that “two plus two equals five.” In Animal Farm, Orwell gives us another example of twisted meaning in “All animals are equal but some are more equal than others.”

These verbal gymnastics are what Orwell called doublethink, which involves the ability “to be conscious of complete truthfulness while telling carefully constructed lies, to hold simultaneously two opinions which cancelled out, knowing them to be contradictory and believing in both of them, to use logic against logic, to repudiate morality while laying claim to it….”

We may smile at “War is peace” or “Two plus two equals five” as absurdities, yet such examples of doublethink and doublespeak are now commonplace in America.

Consider, for example, “politically correct,” a phrase in circulation for years now. But what does it really mean? Are we unaware that it smacks of totalitarianism? Since perceptions regarding politics and culture change today as frequently as the weather, how do we know when or if we are politically correct?

More than any other phrase, politically correct explains the fear and silence on our campuses and in our workplaces. Give voice to an unpopular opinion, slip up and utter a banned thought or word, or have someone quote you out of context, and a social media mob may well hunt you down and destroy your reputation and your life. In Orwell’s book, Big Brother’s Thought Police pounce on such offenders. In our age, the assailants are all eager volunteers.

Other terms in common usage have equally empty or contradictory meanings. Was the Jan. 6 riot at the Capitol an “insurrection?” That’s hard to fathom considering the billions of dollars in property damage last summer were supposed to be the result of “peaceful protests,” not riots. Or consider “systemic racism.” Is it countered by uttering “Black Lives Matter”? And if black lives really do matter to the members of that organization, one wonders why they aren’t working to bring law and order to the streets of cities like Chicago and Detroit, where black casualty lists run into the dozens every week. What about a biological man claiming to be female? Does he have the right to demand he be addressed by made-up pronouns?

In That Hideous Strength, those seeking to transform the world employed euphemism to hide their final objectives, as the organization leading the totalitarian takeover is the National Institute of Coordinated Experiments, or the N.I.C.E. In1984, The Ministry of Truth is a propaganda organ for the state, the Ministry of Love the place where the Thought Police interrogate and torture dissidents.

Some of our politicians indulge in these same antics. Google “Truth Commission USA,” and you’ll find many commentators telling us we need to have the truth filtered to us. Member of Congress Alexandria Ocasio-Cortezadvocated for such an organization to sort out what she regards as misinformation, meaning viewpoints antagonistic to her own.

The ongoing assault on language is corrupting thought in this country, and twisted thoughts and words are corrupting our politics and our culture.

But here’s the good news. Over the past four years, sales of 1984 have skyrocketed, with the book often appearing as a best-seller at outfits like Amazon and Barnes and Noble. Some of us are surely making connections between the prognostications of a 70-year-old novel and our situation today.

In the last six months, many of us from across the political spectrum have wakened to the dangers of the merger of big tech, corporations, the mainstream media, and government. We see the erosion of our liberties, our rights, our opportunities, and our traditions. More than ever, millions of us who belong to none of these power groups are aware we are being played, treated as pawns in a game of global chess.

Now that our ears have opened as well as well as our eyes, we can hear and identify the voices of Babel.

Forewarned is forearmed, the old saying goes. Against the cant and deceptions of our age let’s keep the weapons of truth and common sense close at hand.