Trump: The Globalist Nightmare That Fizzled 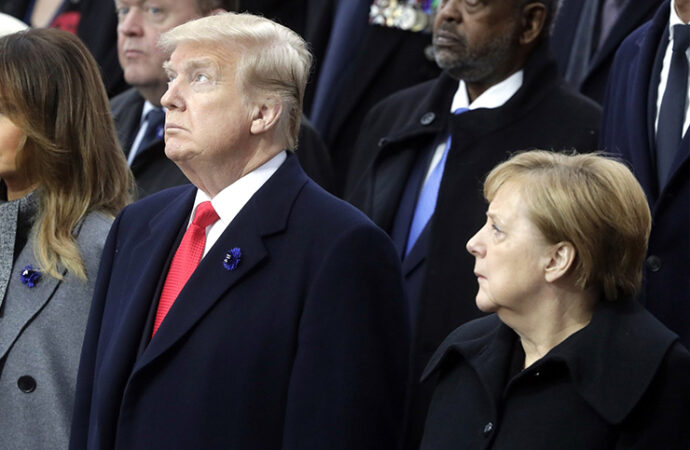 During the 2016 presidential campaign, candidate Donald Trump spoke and acted like every coastal globalist’s nightmare.

Criticizing the European Union as America’s devious competitor, Trump called both the World Trade Organization and NAFTA “disasters.” NATO was obsolete, he said, Crimea was none of our business, and better relations were needed between Washington and Moscow. Advising Obama to stay out of Syria, it looked like a long-overdue realist was ready to take the helm.

Trump’s inaugural address supported this supposition, for he outlined a foreign policy strategy based on pragmatically defined interests. “Every decision on trade, on taxes, on immigration, on foreign affairs” will be made to benefit Americans, he said. “We will seek friendship and goodwill with the nations of the world. But we do so with the understanding that it is the right of all nations to put their own interests first. We do not seek to impose our way of life on anyone but rather to let it shine as an example.”

Within weeks, however, it became clear that Trump’s idiosyncratic approach to decision-making lacked consistency and discipline. He started facing concerted obstacles from the old bipartisan orthodoxy within his own team. The chronology of the pushback is clear, but its early days are worth recalling.

Secretary of State Rex Tillerson arrived in Germany for the Group of 20 foreign ministers’ meeting less than four weeks after Trump’s inauguration. “[T]here was a palpable sense of relief” among the attending diplomats, The Washington Post reported. It “stemmed in part from a sense that Tillerson is a serious man… willing to hear their viewpoints.” They “got the sense that there would be no radical shift in the U.S. stance toward Russia.”

At the security conference in Munich two days later, Vice President Mike Pence presented a thoroughly conventional view of world affairs. The U.S. “strongly supports NATO and will be unwavering in our commitment to this transatlantic alliance,” Pence said, and went on to praise “our shared values” and “noble ideals – freedom, democracy, justice and the rule of law.”

Defense Secretary James Mattis, who also attended the Munich conference, made similar points in a speech the following day. Matthis stated that President Trump had “thrown his full support behind NATO.” Alluding to Russia, he warned of threats “on multiple fronts as the arc of instability builds on NATO’s periphery and beyond.”

After Munich, Pence went to Brussels, where on Feb. 20 he said it was his privilege “on behalf of President Trump, to express the strong commitment of the United States to continued cooperation and partnership with the European Union.” He reiterated the pledge he made in Munich that the Trump administration would “continue to hold Russia accountable” for the violence in eastern Ukraine.

The trans-Atlantic elite class was thrilled. “Pence is looking like an adult,” said a delighted James Jeffrey, Obama’s ex-diplomat and a distinguished fellow at the Washington Institute for Near East Policy. “The question is will Trump listen to him?”

In the aftermath of his National Security Advisor Michael T. Flynn’s demolition by Deep State operatives (a thoroughly sordid affair) the answer was clear. Trump left Flynn in the lurch. He could not resist the globalist straitjacket which the Russophobic, NATO-for-ever, pro-EU “foreign policy community” had been tailoring for him ever since his 2016 victory.

This was followed by Trump’s appointment of Lt. Gen. H.R. McMaster as Flynn’s replacement. In contrast to his predecessor, McMaster saw Russia as an implacable enemy. In May 2016 he said Russia’s annexation of Crimea and support for “rebels” in eastern Ukraine reflected Moscow’s broader effort “to collapse the post-World War Two, certainly the post-Cold War, security, economic, and political order in Europe and replace that order with something that is more sympathetic to Russian interests.” This ran counter to Trump’s declared goals, and the bipartisan establishment was again delighted. “The selection encouraged Republicans who admire General McMaster and waged a behind-the-scenes campaign to persuade Mr. Trump to select him,” noted The New York Times. Defense Secretary Jim Mattis, who had worked with General McMaster, encouraged him to take the job.

With McMaster’s appointment I strongly suspected the game was up. With Steve Bannon’s removal as Trump’s chief strategist in Aug. 2017 I knew it was. The subsequent grotesque absurdity of John Bolton’s appointment as National Security Advisor in March 2018 was neither here nor there.

We have seen coups of sorts in Washington before. The one against Trump was of a different order of magnitude. It had been plotted well before he was inaugurated. Key power nodes had always refused to acknowledge the legitimacy of this presidency, and they remained relentless in their opposition throughout Trump’s tenure. The exercise was unprecedented in the U.S., but the operatives did it in Kiev, Belgrade, Tbilisi, and elsewhere and pronounced it marvelous. Why not here? The Constitution had been a near-dead letter for decades anyway.

The only way to counter the coup would have been for Trump to proceed with shock and awe in early 2017, including a vigorous campaign of legal prosecutions against, and related to, Hillary Clinton, John Podesta, the Clinton Foundation, Pizzagate, Flynngate, etc. Doubling down on his populist domestic and foreign agenda should have been part of the countercoup. As I wrote in Chronicles at the time, America needed Deep Staters’ heads on pikes.

That did not happen. Trump’s became the shortest revolution on record. He failed and went down without a real fight. It seems a better man is needed to lead the resistance against the shameful Biden-Harris regime. It can happen, it should happen, and therefore it will happen. If it does not, calling the U.S. a banana republic would be too charitable.