Now, the Left Owns It All 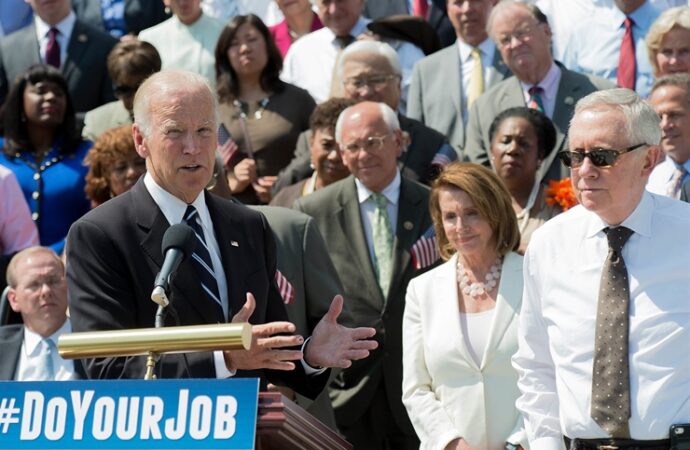 That mob that split off from the Donald Trump rally of Jan. 6 to invade the Capitol has proven a godsend to the left. The death of a Capitol cop has enabled the left—which spent the summer after George Floyd’s death trashing “racist cops” and shouting, “Defund the Police!”—to posture as fighting allies of the men in blue. Liberals who implored us to understand the grievances of the rioters, looters, and arsonists last summer have become sudden converts to the church of law and order. Elites who had condoned the smashing of statues and monuments to Columbus, Washington, Jefferson, and Jackson as a needed cleansing of our hateful history have declared themselves sickened that Trumpists would desecrate the temple of democracy.

Had it been antifa or BLM that carried out the invasion, not one statue would have been left standing in Statuary Hall, and we would have been instructed that it was slaves who had, after all, built the Capitol building. The media is airing endless footage of the mob marauding inside the Capitol. Purpose: to plant indelibly in the public mind the fiction that this was the deliberate work of Donald Trump and his people, and our elites are the real adversaries of violent protest. Indeed, to protect the nation from rightist uprisings in state capitals, this weekend saw the widespread deployment of the National Guard.

Sunday was to be the day the murderous violence of the right would manifest itself. What happened? As The Washington Post reported Monday:

Authorities in cities from coast to coast mobilized a military-style defense of state capitol complexes on Sunday, rolling out Humvees, concertina wire and thousands of National Guard troops clad in battlefield helmets to defend against a possible onslaught of rioters whipped up by the baseless claims of the American president.

The assault never came. Despite warnings from the FBI and boasts from armed, far-right extremist groups, security forces in every instance outnumbered scattered groups of demonstrators, and there were no reports of violence.

In anticipation of Wednesday’s inauguration, 25,000 National Guard have been deployed in and around D.C. to defend against right-wing mobs or would-be assassins. Three or four times as many troops are here in D.C. as there are U.S. troops in Afghanistan, Iraq, and Syria combined. Now, an ounce of prevention is worth a pound of cure. And better too much security than not enough. But even given the Jan. 6 outrage, to arm our capital city as though Stonewall Jackson’s Confederates were going to march up Manassas Road and capture Abe Lincoln after the Union defeat at Bull Run seems a bit excessive.

Yet, Wednesday is a historic day. Trump will be gone from the White House and national power and responsibility will pass to the Democratic Party. Democrats take over the House, Senate, and White House. Virtually all major media will be in their camp. They will be welcomed in a city that has never elected a Republican mayor and has no Republicans on the city council, a city that voted for Joe Biden 18-1 over Trump. The 30,000 registered Republicans in D.C. are outnumbered 12-1 by Democrats.

The government bureaucracies here are as deeply Democratic as the “deep state” that bedeviled Trump for four years. Biden’s Cabinet is the most racially and ethnically diverse ever; the majority of its members are women and people of color. Obama administration holdovers dominate the national security team.

Most of America’s major cities—New York, Chicago, Los Angeles, Atlanta, D.C., Baltimore, Detroit, St. Louis—are run by liberal Democrats, and, coincidentally, all experienced surges in shootings and killings in 2020. While the figures on the criminal perpetrators are rarely reported, it appears that not a great many of the violent and lethal crimes were the work of rogue cops or white supremacists in MAGA hats.

Other problems Trump failed to solve—the pandemic now killing 3,000 to 4,000 Americans a day, the failure to get vaccines into the arms of millions of more Americans—are now Joe’s problems. Calling Trump names will no longer cut it.

Now, Democrats must decide whether to proceed with the impeachment trial of Trump for inciting a riot that began on the Capitol steps as he was speaking a mile away, a riot planned long before the rally on the Mall. Now, Democrats can choose whether they will forego extracting their pound of flesh as the first order of business in the Senate and let Nancy Pelosi sit a while on her impeachment resolution. Now, Democrats have it all. If they wish, they can abolish the filibuster, pack the Supreme Court, make D.C. and Puerto Rico states, forgive all student debt, and vote for slavery reparations.

One reads that a caravan of thousands is forming up in Honduras to pass through Guatemala in the hope of reaching and crossing the U.S. border when Biden becomes president. That, too, is Joe’s party’s problem now.