Ivory Towers Only Come in Blue 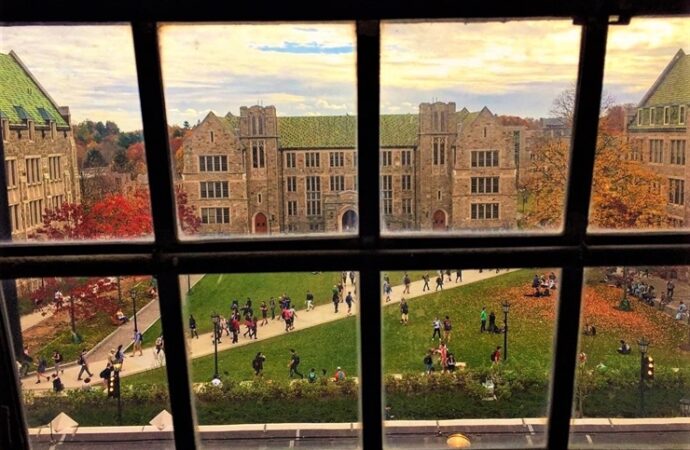 While attempting a fruitless, year-end clearing of my inbox, I came upon an email sent out to the faculty at Bucknell University, where I am employed, in the wake of the 2016 presidential election. The letter took a stark partisan stance on the election results, seeking signatories to a letter for the campus newspaper.

Four years later, that email makes a complex point about our current national politics and elitist culture in a brilliantly concise manner. It reads as follows:

Many of us are deeply disturbed by the results of our recent national election, and profoundly concerned by the tacit approval and open support expressed by the president-elect of bigotries and oppressions that we have worked so long and hard to eradicate. While we struggle to understand the election results, we are in no way required to respect the denigrating ideals and inhumane goals thus far publicly espoused by the incoming administration. As so many of our great thinkers and teachers have warned, neutrality in the face of such developments does nothing but lend support to the perpetrators of injustice. Sadly, it is the stance that many of us in academia retreat to in attempts to claim some higher ground beyond the fray. (Notice that the color of the tower continues to be ivory.) Such ground is an illusion that allows us to feel good about doing nothing in the face of injustice.

We stand in solidarity with and/or identify as those who have been and continue to be oppressed. If you experience denigration or other forms of violence because of who you are or how you voted, we ask that you come to us, let us know, allow us to stand up for you and with you. Know that you are not alone. Rather, you are part of a community, the mission of which is ‘to educate our students to serve the common good and to promote justice in ways sensitive to the moral and ethical dimensions of life.’ (http://www.bucknell.edu/Mission) We will continue to work toward the realization of that mission, here and elsewhere.

The letter was eventually signed—according to my own check of the affiliations of signatories—by around 350 people who were, at the time of the letter, professors at Bucknell. There are just over 360 fulltime professors here. Nearly every single member of the faculty signed the letter.

There was no critical public response of any kind to this letter on campus. Not a peep.

For those paying attention, there are many data points that indicate how ideologically biased university faculties are. On the campuses of liberal arts colleges such as Bucknell, the ratio of Democrats to Republicans on faculties is nearly 13 to 1, reports a recent National Association of Scholars survey.

Though this evidence is overwhelming, the most entrenched far-left faculty continue to vocally deny it.  Given that they control many institutional outlets of information in the way of journals and professional associations, much air is given to the denials, and much less to the facts that are undeniable to any objective observer.

If you’re still torn on whether this is true, take this small test. First, read the above letter again and absorb its message, noting that Bucknell is not nearly the most left-leaning university in the country. To summarize, the letter’s message is this:

Once you’ve absorbed that, imagine a similar letter being written and published on any campus in the wake of the 2020 election. Such a materialization seems unlikely.

If such a letter did somehow emerge, what would the response be? Would a letter indicating “disturbance” at the recent results of Joe Biden’s election and a refusal to “respect” his incoming administration meet the same silence that greeted the 2016 letter?

The Trump years have now concluded, and true conservatives are forced to acknowledge that they promised much more than they delivered. There is precious little to show for the promise to control immigration or the promise to roll back efforts to teach American youth lies about the country and its heritage.

Yet the Trump years offer a profound look at the deep workings of the American elite, particularly those in her ivory towers. They are viciously hostile to any criticism of the status quo on immigration, international relations, or internal cultural policies. Any effort to move American cultural and political practice away from globalist, multiculturalist hatred of the historic nation and toward admiration, love, and primary concern for the American people and culture will receive hysterical, irrational animosity.

If college professors were ever committed to the pursuit of objective knowledge and truth, they long ago gave that up in favor of a ferocious commitment to ideological partisanship in the interest of the destruction of historical America. The Trump presidency fulfilled few of its promised policy goals, but it at least provided abundant opportunities for us to see the left professoriate in its true, disturbing colors. We should keep that knowledge close at hand as we struggle on, gaining understanding of the foe we face.