Do Black Lives Matter in the White Elite’s Civil War? 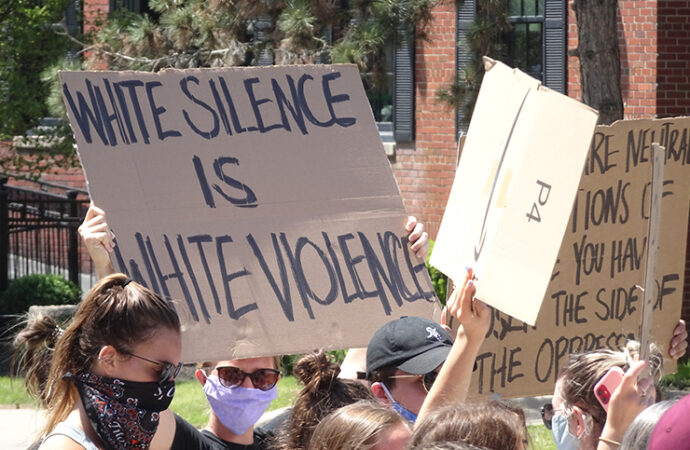 Sasha Johnson, a prominent Black Lives Matter activist, tweeted the last day of 2020 her highest hope as a black nationalist: “The white man will not be our equal but our slave. History is changing. No peace without justice.”

I kept this statement in mind as I looked at USA Today and our look-alike local newspaper on the newsstand on December 31. Both featured prominently on their front pages a BLM crusader looking down defiantly at whites in a widening revolt against a racist America. I have no idea what BLM is doing to remove any of the systemic social problems of urban blacks or to improve their material well-being.

Last week, I watched on TV as a black boxer entered the ring, dressed in a BLM robe, and surrounded by a ring staff who also wore BLM advertisements on their clothing. According to the announcer, this politically engaged boxer had lost siblings in what seems to have been gang wars. I am at a loss to see how BLM’s call to defund or abolish the police will engage the worrisome problem of black-on-black crime.

One may also be puzzled about why the black racism featured by BLM, and which comes through most plainly in its refusal to recognize that white lives have the same value as black ones, occasions only scattered objections from whites. This may be the most surprising thing about the rise of BLM to national and even international prominence. Why don’t whites care about being accused of supporting a racist society that is allegedly descended from a bigoted white past?

In my former home state of Connecticut, Miguel Cardona introduced a critical race studies program into public education, which earned this top educational official nationwide plaudits. Now Cardona is being rewarded for his anti-white educational crusade by being considered for education secretary in the Biden Administration. The overwhelming majority of those who cast their ballots for Cardona’s Democratic Party in Connecticut, whose popular U.S. Senator Richard Blumenthal showcases his relationship to BLM and Antifa, are white and may even include acquaintances. Don’t these voters care that the party they overwhelmingly support, throws dirt at whites as whites? Many white voters seem delighted to have this dirt thrown at them and to have their children coming home and reciting the anti-white hate-speech they picked up courtesy of Cardona and the teachers’ unions.

I am not denying others are complicit in this continuing outrage, like woke capitalists, government bureaucrats, black race hustlers, and media ideologues. But let’s not forget the predominantly white electorate in this country, especially the self-important soccer moms, who seemed pleased with the new order. These people do have political choices and they make disastrous ones. It is not wayward elites who are abusing our democratic public, so much as the public abusing itself, when it chooses to be ruled by anti-white racists.

Recently someone asked me why I am not a white nationalist. My answer was that we first must address the looming white problem. Then we can share the blame with others for our current madness. There would be no critical race theory being taught anywhere in this country unless whites wanted it taught and in fact insisted that it be taught.

The question is why this is the case. Something like what I’ve described is going on throughout the Anglosphere and Western Europe. There Islamophilia and anti-colonialism have led to the same kind of socially suicidal mentality among the native white populations that we find among our woke elites and their ubiquitous imitators. The closest to an explanation that I can come to after researching this behavior is that there is a white civil war going on, in which racial minorities and, in Europe, Muslims play an ancillary role. Upwardly mobile urban whites hate other whites living in what until recently were traditional, religiously influenced communities. The anti-white, anti-Christian torrents of abuse coming from these elites and would-be elites are never aimed at themselves. Rather they are intended for those other whites whom they despise and want to see degraded.

In a recent, stirring speech at a Turning Point conference, Fox News host Tucker Carlson observed that the cultural Left is trying to take away our “road map” by cutting us off from any sense of an historical past. The Left is doing this by pulling down statues, renaming buildings, army bases, and even sports teams, and railing against the American past. This, of course, is all true. What we are seeing in the United States has been going on in a slightly different form elsewhere—for example, in Germany, where the government claims to be saving its population from a largely imaginary return to fascism by condemning and extinguishing much of its past.

But there is another side to this cancel culture that Carlson failed to mention. It is a weapon in a civil war that some whites are wielding against other ones. The elites and their followers are just punishing those they hate. They obviously don’t see they are wreaking havoc on themselves.