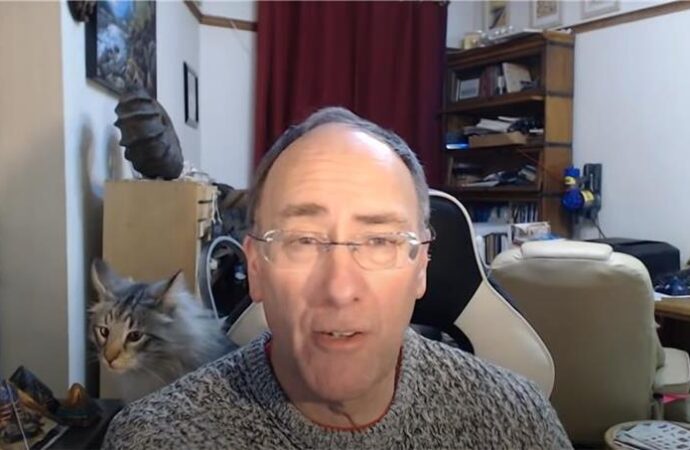 A very interesting British man named Simon Parkes has become a YouTube phenomenon in just a few days following the events of the Capitol Hill riot on Jan. 6 and Trump’s apparent concession speech the following day. Parkes has told disappointed Trump supporters that he is in direct contact with “Q,” the shadowy figure supposedly leading a pro-Trump conspiracy to unseat corrupt and evil forces in Washington, D.C., and that there will be a great counter-revolution and legal disclosure in the next few days that will end with Trump being installed for a second term as president.

Prior to the events of last week, Parkes was known (to the extent he was known at all) as a former British Labor Party city councilman for Whitby who claimed that he is the adopted child of a 9-foot-tall green space alien and that he fathered an alien baby named “Zarka.” He ran some kind of New Age website called Connecting Consciousness, which appears to have been taken down in the last 24 hours, as well as a YouTube channel.

Before the Jan. 6 riots, Parkes’ YouTube channel had 10,000 subscribers, according to the social media tracking site SocialBlade. His subscriber count has now skyrocketed to more than 600,000 in just a few days.

Parkes makes truly extraordinary claims with a calm, nonchalant confidence. His Jan. 12 video discusses how Q-Anon is a group of military intelligence professionals who have used a secret “quantum computer” to calculate probabilities leading up to the events of the 2020 election. This group’s formation stretches back to the assassination of John F. Kennedy who had to be killed by the powers-that-be because of his plans to return the U.S. to the gold standard, Parkes asserted. He said the top politicians in government are not only pedophiles, they are keeping many men, women, and children captive in underground bases; House Speaker Nancy Pelosi’s laptop was seized and found to contain pornographic material; she will soon be arrested, along with the Pope and Vatican officials who are part of the conspiracy, too.

President Trump will soon enact the Insurrection Act of 1807 to crack down on these malefactors, Parkes told his audience, and his forces, including retired Gen. Michael Flynn, are lying in wait around the world to arrest key figures in government, business, and religion who are in on the scam. They will restore Trump to a second term with Flynn as his new vice president.

Normally, one could ignore or even be amused at Parkes as one of any number of Internet lunatics, if it were not for the explosive growth of his followers or for the spread of his ideas. Former Deputy Assistant to the President Sebastian Gorka has been doing battle with people deceived by Parkes and other promoters of the Q ideology on his radio show, insisting in no uncertain terms that there will not be an attempt by Trump to seize a second term through the Insurrection Act or military force.

The Q movement really entered popular consciousness in 2016 after a young man influenced by the anonymous posts of Q fired a gun inside a Washington, D.C. pizza restaurant in the belief that its basement held sexually abused children for depraved Washington, D.C. politicians. The fact that good intentions can be misdirected by Q’s bad ideas into embarrassing, dangerous actions was evident then. This truth was shown again last week when a man calling himself “Q Shaman” wearing a buffalo-horn headdress was among those who rioted in the Capitol building, even posing for pictures at the Speaker’s podium in the House Chamber.

Conspiracy theories inevitably appear when public trust in officials collapses, and when a people ascribe to its leaders “the most villainous purposes and the most ruthless means of attaining them,” Chronicles columnist Samuel Francis wrote in 1996. The frustration that conservatives have over their concerns about the 2020 election remaining unaddressed by Congress or the Supreme Court contributes to this sense that there is a shadowy conspiracy out to get them.

Rather than focusing on stories about evil people working in the shadows, Francis councils that it is far more useful and sophisticated for people to focus on what libertarian economist Murray Rothbard termed “power blocs.” In other words, human societies are composed of contending forces that seek power, and those that are most successful in mobilizing the means of power constitute an elite or ruling class. Francis writes:

The problem with this concept of conspiracy as ‘power bloc’ or ‘political force’ is that it tends to take all the fun out of conspiracy theory. Instead of locating villainy in a small, monolithic, invisible, and all but invincible band of plotters, it offers a sociology of elites as the main explanation of the dominant historical trends of the age. But truth, if it is less fun than fiction, is at least more useful.

At Chronicles, we have tried to perform this service by analyzing the 2021 political situation in terms of competing power blocs that have formed around separate cultural identities between Middle America and its opposing managerial elite. This can be seen both in Pedro Gonzalez’s December 2020 piece, “Middle America’s Road to Power,” and in my January 2021 piece, “The Long March Ahead for the Real Right.”

As for Simon Parkes, he appears to have fallen silent during the last 24 hours and his website appears to have disappeared. Generally speaking, I don’t support anyone having their speech suppressed—the best cure for bad ideas is to expose them to the light of criticism—which is the purpose of this piece. Let’s hope that our technology censors haven’t come for Parkes, and that he’s merely been temporarily sidetracked by intergalactic parenting duties.