Orwell’s ‘Coming Up for Air’ Is Prophetic for Our Times 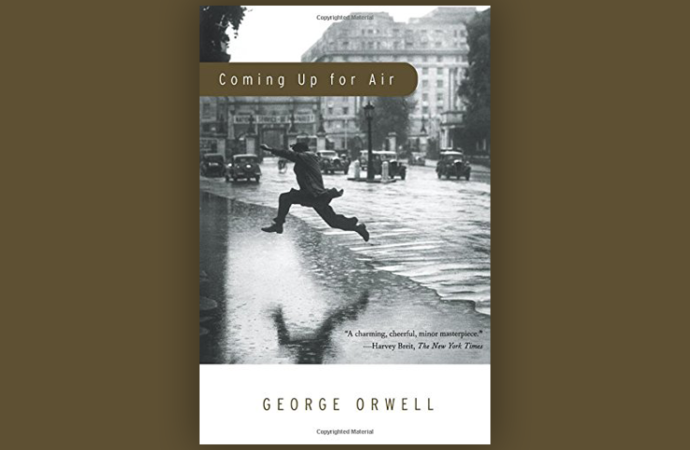 Seven years before he began writing his post-war masterpiece, 1984, George Orwell published Coming Up for Air, a novel in a different key that presaged the themes of his later book.

Forty-five-year-old George Bowling is a character about as different from Winston Smith as can be imagined. Whereas Smith is sour, wan, and forlorn, Bowling is cheerful, hearty, and optimistic. He’s certain that although the future looks bleak, he’ll remain moderately successful as an insurance salesman. The “streamlined men,” the managerial class running Britain’s show, have created a world of profitable material goods and will soon usher in the next war, less to ward off German aggression than to maintain their privileged position in society. Nevertheless, Bowling’s experience tells him he will weather what’s thrown at him.

Still, Bowling is apprehensive. What chiefly troubles him is the artificiality of life in the 1930s. Having grown up in a farming community as a shopkeeper’s son, he finds the synthetic ingredients used to make foodstuffs especially obnoxious. Reading the label on marmalade, he discovers it’s made with “neutral fruit juices.”

Bowling’s rise to his own questionable estate, he realizes, is through an accident of fate that dislocated him from his proper position in the class hierarchy. During World War I he had been wounded in an air attack, not severely but seriously enough to have been taken out of active duty and put to work overseeing a supply dump in Northern Ireland. There he discovered some discarded books and a lending library. Not having much to do, he spent a year reading what was on offer. He fondly remembers reading H. G. Wells’ The History of Mr. Polly and A Short History of the World. A slender education, but enough to provide him with a skeptical view of the world.

What he learns is that, in the recent past, the world was pretty much the same as the one his ancestors had lived in. This is no longer so. The streamlined men have arrived to obliterate the past in order to create a more profitable and manageable future. They require a more compliant populace who will submit to mass production, mass education, and mass communication. This way, Bowling concludes, lies madness.

Bowling is also not persuaded by Porteous, a retired Oxford-educated public school master who fervently believes there is and never will be anything new under the sun. Porteous believe it’s his professional duty to carry the past into the present.

The novel reaches its climax when a RAF flyer unintentionally drops a bomb on the village of Bowling’s youth. Although apologetic, military authorities are disappointed by the results: only one house destroyed and three people dead. A jar of neutral fruit marmalade rolls out from amid the wreckage accompanied by a stream of blood, symbolizing both Bowling’s fear of the streamlined men and his contempt for the ersatz commodities of modern life.

The merest glance at our contemporary circumstances confirms the prophetic nature of this novel.