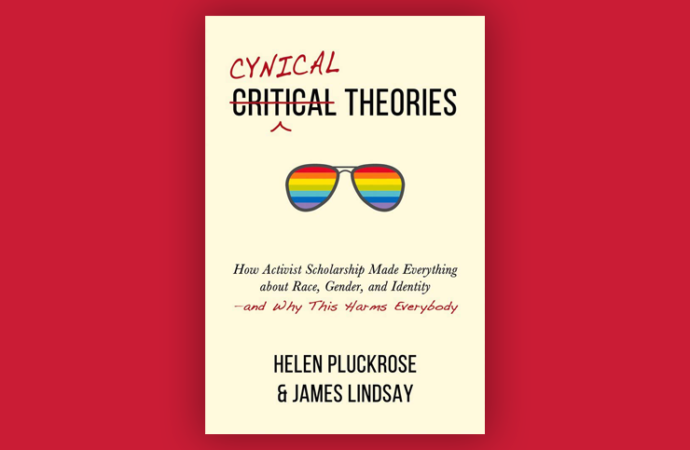 Cynical Theories: How Activist Scholarship Made Everything About Race, Gender, and Identity—and Why This Harms Everybody, by Helen Pluckrose and James Lindsay (Pitchstone Publishing; 352 pp., $27.95).

To understand wokeness, I often ask students to explain why they add the word “social” to “justice.” They have yet to provide a satisfactory answer. My subsequent requests for clarification induce paroxysms of frustration. Luckily, this book has now rescued me from my generational ignorance. Its authors explain how social justice makes students “skeptical of science, reason, and evidence,” “read power dynamics into every interaction,” “politicize every facet of life,” and “apply ethical principles unevenly in accordance with identity.”

The authors pinpoint how this ideology grew out of the distrust of liberal social orders following the enormity of the two world wars. The left’s all-consuming alternative ideology, Marxism, also failed, as the unsurprising bankruptcy of collectivist countries proved. Man eventually realized the God of Scientific Progress didn’t care about him. Traditional conservatives won’t dispute the left’s assessment of the soulless postwar decades as “an artificial, hedonistic, capitalist, consumerist world of fantasy and play.”

Postmodernists eagerly injected their nefarious philosophy into that spiritual vacuum in accord with two principles: skepticism about whether objective truth is knowable, and the belief that knowledge is determined by the power structures of society. Neither sanity nor logic could escape postmodernism’s metaphysical black hole. You’ve probably rolled your eyes at the mishmash of academic theories it inspired which defile university curricula today—postcolonial, queer, critical race, intersectional, feminist, and gender, each of which gets a full chapter in this book.

But your eyes will absolutely pop out of your head when you learn their votaries demand scholars preferentially cite women and minorities while minimizing citations of white Western men to conform with “research justice.” If that sounds arbitrary or vindictive, then you’ve failed to grasp that knowledge “rooted in evidence and reasoned argument is an unfairly privileged cultural construct of white Westerners.”

Otherwise sensible alumni may blithely dismiss their alma maters’ acquiescence to such craziness. But Frankenstein’s monster has just graduated with his master’s in Fat Studies. According to his LinkedIn page, he’s now busy tearing down statues, peacefully protesting, and writing op-eds for The Washington Post.