1824: The Strangest Presidential Election Yet 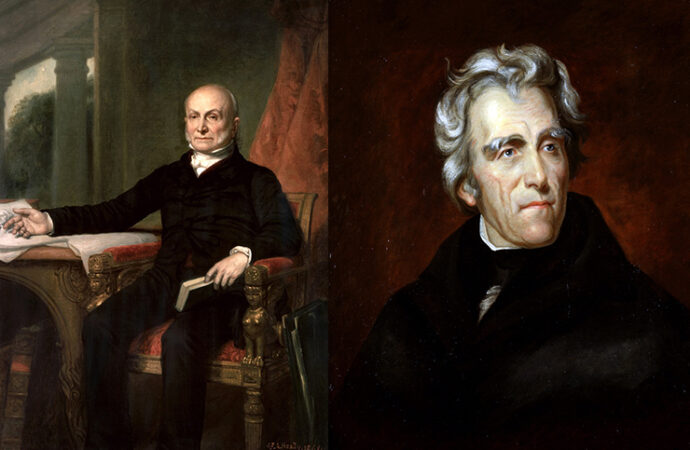 The Era of Good Feelings. Not exactly the best descriptor for our own times is it?

Spanning from the mid-1810s through the end of President James Monroe’s second term in 1824, the Era of Good Feelings was a time in which the Democratic-Republican Party enjoyed practically unopposed control of the United States following the Federalist Party’s collapse. Seems like a set up for a smooth and politely conducted presidential election cycle, doesn’t it?

Don’t be too sure. The lack of an opposition party led to a decrease in discipline, exacerbating intra-party tensions among the Democratic-Republicans. Back then, “King Caucuses,” composed of political parties’ congressional delegations, nominated candidates for the presidential ticket. Yet by 1824, this system was viewed as undemocratic, and only a third of the Democratic-Republican congressional delegation took part, nominating Secretary of the Treasury William Crawford.

This nomination was widely ignored. As a result, three alternative candidates began collecting nominations from state legislatures. Thus, America went from a country with a single party and one presidential nominee, to having four men vying to win the election of 1824: Crawford, Secretary of State John Quincy Adams, Speaker of the House Henry Clay, and Senator Andrew Jackson.

Such an electoral scramble is unthinkable in recent years. The last time a third candidate outright won electoral votes (rather than being gifted them by faithless electors) was in 1968, when George Wallace of the American Independent party won five southern states in addition to a faithless Nixon elector in North Carolina.

The crowded playing field of 1824 makes 2020’s dragged out election results look like nothing in comparison. The electoral map was a jumbled mess:

Jackson ended up with a plurality of both the popular vote (41.36 percent) and the electoral vote (99 votes) but was still 32 electoral votes short of a majority. Adams came in second with 84 electoral votes, followed by Crawford with 41 and Clay with 37.

As no candidate won a majority, this caused the first – and to date, the only – contingent election in American history. The Constitution provides that, in the event of no candidate receiving a majority of the Electoral College’s vote, that states’ delegations to the House (each having a single vote) shall choose a president among the three candidates with the most support from the Electoral College.

Speaker of the House Henry Clay was eliminated with this restriction, and was left to play a pivotal role in whipping House delegations’ votes to his liking. Crawford had reportedly suffered two strokes in his lifetime, and Clay thought the second one had rendered him unfit for the presidency. While he may not have harbored fond thoughts of Adams, Clay disparaged Jackson and his victory at the Battle of New Orleans, writing, “I cannot believe that killing 2,500 Englishmen at New Orleans qualifies for the various, difficult and complicated duties of the Chief Magistracy.”

So Clay went to work, urging the delegations of states which he had won to cast their votes for Adams, helping to deliver Missouri, Kentucky, and Ohio in this manner. At the time there were 24 states, so a victorious candidate in a contingent election needed the support of 13 states’ delegations. Clay’s support of Adams ignored the Kentucky state legislature, which had instructed the state’s U.S. House delegation to support Jackson.

On the first ballot Crawford won four states, and Jackson won seven, but Adams won thirteen states and the contingent election, and therefore the presidency.

Jackson was furious, even more so when Adams appointed Clay as Secretary of State. When this happened, Jackson resigned his senate seat, denouncing the entire election as “the corrupt bargain,” and returned to Tennessee to lay the groundwork for his 1828 presidential run.

Adams lost his reelection bid to Jackson in 1828, and four years later Jackson defeated Clay to earn a second term.

Thomas Jefferson may have started the Democratic-Republican Party, but it was under Jackson that the era of strong political parties in America began, as well as the modern usage of the Democratic Party name. This is why (until recently) the modern party’s primary fundraising events were called Jefferson-Jackson Dinners.

Americans in 2020 are waiting to see the true results of several close swing states, but at least we are not undergoing another edition of the political machining and corrupt bargaining of 1824.