The Return of the Flagellants 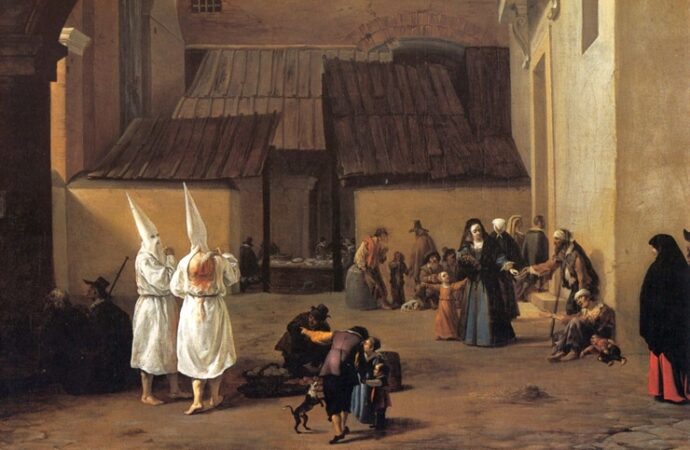 The lockdowns have disproportionately targeted fun. No house parties. No travel. Bowling, bars, Broadway, theater, amusement parks, all banned. Weddings, forget it. Restaurants, hotels, conventions, and even golf were all targeted by the lockdowners.

There is an ethos here. To beat the disease, you have to suffer. You have to eschew joy. You must sit at home and go out only for bare essentials. Even today, the great disease mitigator Andrew Cuomo, who already admitted in a phone call that the lockdowns were not science but fear, has warned New Yorkers not to travel outside the state except when absolutely necessary.

There is even a costume associated with the new national penance. It’s a long sweater dress, wool leggings, clompy sneakers, gloves, and the biggest face covering you can find. It’s not about safety. It’s about symbolizing your virtue, contrition, and allegiances.

The first time I saw this costume, which reminds me of women at a Taliban funeral, was back in mid-March. A hipster millennial, once living a carefree life, found new meaning in suffering for a cause, and quickly turned on anyone not dressed in dread while listening to the Dies Irae in one’s head.

What’s going on here? Surely this is not about the science. There is a moral drama at work, one that taps deeply into some spiritual impulse within people. It’s about the belief that bad things are happening to us because we have sinned. The clothing and the banning of fun are part of our acts of contrition and our penance for wrongdoing. Sounds crazy? Not so much. Otherwise, it is hard to explain. And this kind of response to disease is not unprecedented.

Eyewitness to History explains that the Flagellants were a religious movement that arose during the Black Death:

The Flagellants were religious zealots of the Middle Ages in Europe who demonstrated their religious fervor and sought atonement for their sins by vigorously whipping themselves in public displays of penance. This approach to achieving redemption was most popular during times of crisis. Prolonged plague, hunger, drought and other natural maladies would motivate thousands to resort to this extreme method of seeking relief. Despite condemnation by the Catholic Church, the movement gained strength and reached its greatest popularity during the onslaught of the Black Death that ravaged Europe in the mid-fourteenth century. Wearing white robes, large groups of the sect (many numbering in the thousands) roamed the countryside dragging crosses while whipping themselves into a religious frenzy.

Here is a firsthand account of the Flagellants in the 14th century by Sir Robert of Avesbury, as quoted from Norman Cohn’s classic work Pursuit of the Millennium:

In that same year of 1349, about Michaelmas (September, 29) over six hundred men came to London from Flanders, mostly of Zeeland and Holland origin. Sometimes at St Paul’s and sometimes at other points in the city they made two daily public appearances wearing cloths from the thighs to the ankles, but otherwise stripped bare. Each wore a cap marked with a red cross in front and behind.

Each had in his right hand a scourge with three tails. Each tail had a knot and through the middle of it there were sometimes sharp nails fixed. They marched naked in a file one behind the other and whipped themselves with these scourges on their naked and bleeding bodies.

Four of them would chant in their native tongue and, another four would chant in response like a litany. Thrice they would all cast themselves on the ground in this sort of procession, stretching out their hands like the arms of a cross. The singing would go on and, the one who was in the rear of those thus prostrate acting first, each of them in turn would step over the others and give one stroke with his scourge to the man lying under him.

This went on from the first to the last until each of them had observed the ritual to the full tale of those on the ground. Then each put on his customary garments and always wearing their caps and carrying their whips in their hands they retired to their lodgings. It is said that every night they performed the same penance.

The Catholic Encyclopedia explains the terrifying movement in more detail:

The Flagellants became an organized sect, with severe discipline and extravagant claims. They wore a white habit and mantle, on each of which was a red cross, whence in some parts they were called the “Brotherhood of the Cross”. Whosoever desired to join this brotherhood was bound to remain in it for thirty-three and a half days, to swear obedience to the “Masters” of the organization, to possess at least four pence a day for his support, to be reconciled to all men, and, if married, to have the sanction of his wife.

The ceremonial of the Flagellants seems to have been much the same in all the northern cities. Twice a day, proceeding slowly to the public square or to the principal church, they put off their shoes, stripped themselves to the waist and prostrated themselves in a large circle.

By their posture they indicated the nature of the sins they intended to expiate, the murderer lying on his back, the adulterer on his face, the perjurer on one side holding up three fingers, etc. First they were beaten by the ‘Master’, then, bidden solemnly in a prescribed form to rise, they stood in a circle and scourged themselves severely, crying out that their blood was mingled with the Blood of Christ and that their penance was preserving the whole world from perishing. At the end the ‘Master’ read a letter which was supposed to have been brought by an angel from heaven to the church of St. Peter in Rome. This stated that Christ, angry at the grievous sins of mankind, had threatened to destroy the world, yet, at the intercession of the Blessed Virgin, had ordained that all who should join the brotherhood for thirty-three and a half days should be saved. The reading of this ‘letter,’ following the shock to the emotions caused by the public penance of the Flagellants, aroused much excitement among the populace.

To reiterate, these people expected everyone else to celebrate them, for it was they who were keeping the world from falling apart completely. Their sacrifice was an act of benevolence to the rest of humankind, so how dare people show ingratitude! Even worse, the more people continued to live in revelry and fun, the more the Flagellants had to punish themselves. For this reason, they felt and showed disdain for anyone who declines to join their cause.

If you do not see the parallels here with what’s going on today, you haven’t been paying attention for seven months. See, for example, the tremendous media hatred for Trump rallies. This also helps explain why the lockdowners celebrated the BLM protests but condemned the anti-lockdown protests. The former are seen as part of penance for sin whereas the latter are calls to persist in sin.

The Catholic Church, which has a long history of crushing nutty extremism within its ranks, was clear: this was a “dangerous heresy;” the real epidemic, the Church opined, was not the disease but an “heretical epidemic.” None of it mattered: the movements grew and persisted for hundreds of years, proving yet again that once fear and irrationality take hold, it can take a very long time for rationality to return.

But how can this be? We are not a very religious people as we were in the Middle Ages. Where are the priests guiding the new Flagellants? What is the sin we are attempting to expiate? It doesn’t take that much imagination. The priests are the data scientists and media stars who have been calling for lockdowns and celebrating them now for most of 2020. And what is the sin? It doesn’t take that much imagination to extend this analysis: people voted for the wrong person to be president.

Maybe my theory here is wrong. Maybe there is something else going on. Maybe we are really talking about a general loss of meaning in life, a guilt that comes from prosperity, a desire on the part of many to turn lights of civilization off and wallow in suffering for a time to purge ourselves of the stain of vice. Whatever the answer to the question of why that this is really happening, and that it has nothing to do with actual science, is an observation that seems incontrovertible.

In England in the 14th century, when the marauding Flagellants came to town, good members of the community found these people amusing and rather ridiculous, and otherwise they went about their lives, having fun and building a better and more prosperous society. Let those who desire to suffer be free to do so. As for the rest of us, let us get back to having good lives, including partaking in actual fun.