The History of the Supreme Court in Nine Justices: Foundation and Secession 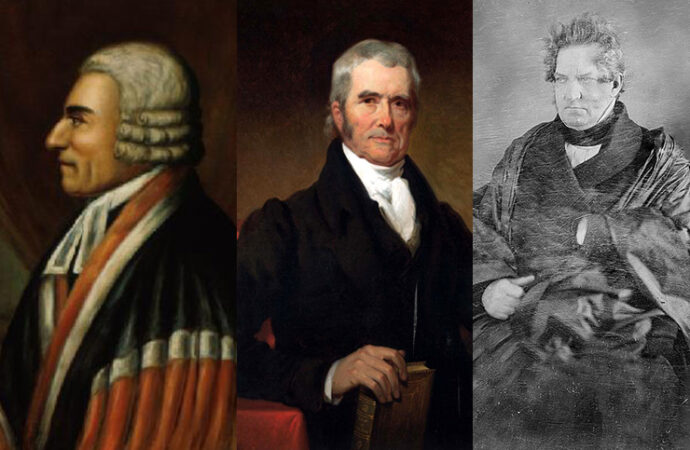 If Amy Coney Barrett is confirmed, she will be the 115th justice to sit on the Supreme Court of the United States, spanning 231 years of the court’s history.

The Supreme Court first convened on February 2, 1790, in a session with no cases on the docket. It would have begun on February 1, but a quorum wasn’t achieved until Justice John Blair arrived a day after the Court’s scheduled start. This first meeting covered minor procedural matters, while also admitting a couple dozen attorneys and counselors to the federal bar.

Following Justice Ruth Bader Ginsburg’s death on September 18, the Supreme Court began its 2020-2021 term on October 5 with eight justices. The 231 years between the first session of the Jay Court (named for Chief Justice John Jay) and this the sixteenth year of the Roberts court can be connected by the overlapping terms of just nine justices.

William Cushing was one of the first Supreme Count appointees of George Washington. He was confirmed by the Senate by acclamation on September 26, 1789, and sworn in on February 2, 1790 at the start of the first court session. Cushing was Washington’s second choice to replace John Jay as Chief Justice upon the latter’s retirement, but Cushing declined the appointment even after Senate confirmation.

Cushing served until 1810, seeing nine justices retire or die in office before him. He was also the last justice on the Supreme Court to wear a full wig.

One of the most famous justices, John Marshall is the longest serving Chief Justice and fourth longest serving justice of any kind in Supreme Court History. He served with Cushing for more than nine years.

Unlike his predecessor Chief Justice Oliver Ellsworth, Marshall was able to convince his colleagues to stop publishing their own individual opinions (seriatim opinions) and instead deliver an opinion of the court to provide a clear rule to follow on similar legal cases going forward. Marshall presided over many important cases in his nearly 35 years on the court, none more important than Marbury v. Madison which clearly established the principle of judicial review. Marshall wrote:

Thus, the particular phraseology of the Constitution of the United States confirms and strengthens the principle, supposed to be essential to all written Constitutions, that a law repugnant to the Constitution is void, and that courts, as well as other departments, are bound by that instrument.

Marshall served until his death at age 79. According to legend, the Liberty Bell cracked while ringing during his funeral procession and was never rung again.

James Moore Wayne, appointed by President Andrew Jackson, served with Marshall for less than six months. In Louisville, Cincinnati & Charleston Railroad Co. v Letson, Wayne wrote, “A corporation created by a state to perform its functions under the authority of that state and only suable there…, seems to us to be a person, though an artificial one…,” a phrase that will be anathema to those opposed to the 2010 Citizens United v. FEC decision.

Most infamously Wayne was part of the majority of the court who decided in Dred Scott v. Sandford, which held that African Americans, regardless of their status as free or enslaved persons, were not American citizens and thus had no standing to sue in federal court. Wayne concurred “entirely in the opinion of the court as it has been written and read by the Chief Justice.”

Formerly a Congressman from Georgia, Wayne stayed on the Supreme Court for 32 years, making it through the Civil War. Despite his Southern sympathies and his son’s service as a Confederate general, Wayne did not believe there was any legal justification for states to secede from the union.

Cushing, Marshall, and Wayne cover the first 77 years of the Supreme Court. America saw the end of the Civil War in only two degrees of separation from the court’s first session. She also saw her Supreme Court rule that federal treaties supersede state laws, the establishment of the Court’s power of judicial review, and separate rulings that held that corporations are a type of person, but African Americans are not citizens.

Seeing such ground covered and upturned in so short a time lends new light to our present political reality in which the court has become ground zero for the heart and soul of America.

This is part one of a three-part series on the history of the Supreme Court of the United States.