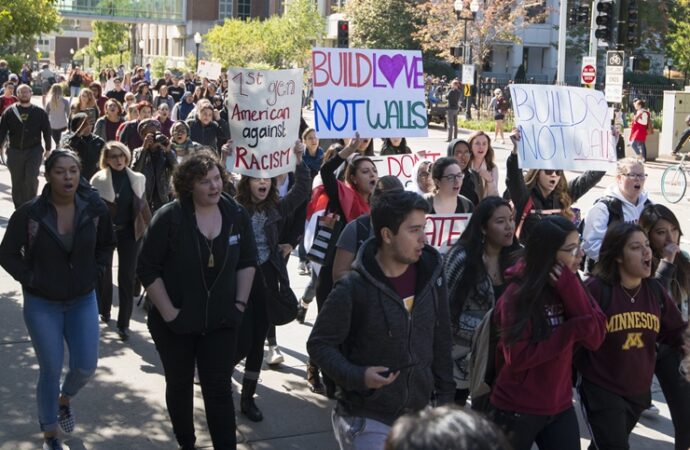 Around 40 percent of college students said they will likely or certainly protest if President Donald Trump wins the election, according to an Axios poll released Friday.

“The dissatisfaction with the status quo is also reflected by the number of students who are willing to protest Trump reelection with 40% of college students saying they will likely or certainly participate in protests,” the survey said.

When asked, “If someone you know does not vote even though they can, will you address, confront, or otherwise convey disappointment towards them?” more than half, 61 percent, said that they would or probably would, according to the survey.

Almost a quarter, 24 percent, said they probably will not confront nonvoting acquaintances and 16 percent said “definitely not” for the same question, according to the survey.

“We found that young people are bummed by the state of the nation. More than 75 percent believe race relations, America’s standing in the world, and safety have plunged since 2016,” Cyrus Beschloss, founder of College Reaction, told the Daily Caller News Foundation.

“Most students support Joe Biden, so a Trump win would naturally sting most. But what we learned is that it would also spark swift demonstrations, rather than empty rants. Civic engagement is cool now,” Beschloss continued.

The survey was conducted via email Oct. 6-7 and has a margin of error of plus or minus 3.3 percent. The poll was done “from a representative sample of 872 college students,” according to the survey methodology.