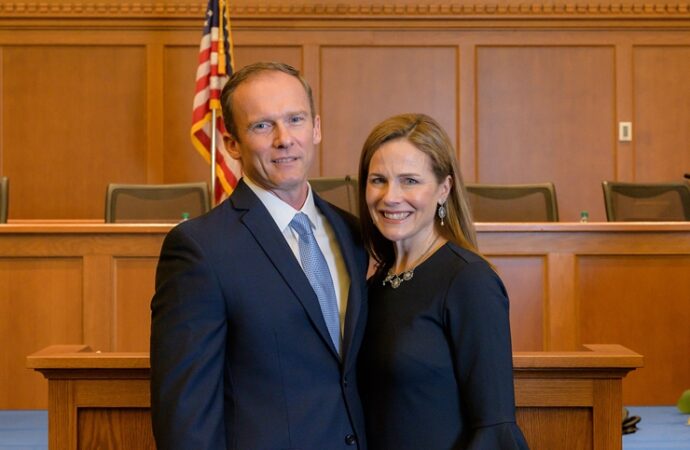 Amy Coney Barrett, President Trump’s nominee to the supreme court, has seven children. Unless you have been living under a rock, you already knew that. All the media coverage of her nomination, which was announced on September 26, devoted extensive attention to this fact.

If a poll were to be taken, no doubt more Americans would be able to identify the birth country of Barrett’s two adopted children (Haiti), than the Federal Court Circuit on which she currently serves as a judge (the Seventh).

America’s birth rate has been declining for years, and in 2019 it hit a record low of 1.7. Thus, the size of Barrett’s family is certainly unusual. But does it deserve the amount of coverage and commentary it has generated? After all, this is a personal matter for Barrett and her husband.

But that’s just it. Our society pays a great deal of lip service to the idea that decisions about pregnancy and giving birth are “private.” A woman should have the “right to choose.” In practice, however, absolutely everyone feels entitled to express their opinion.

In Vogue magazine last year, Prince Harry, who was still a working member of the British royal family at the same time, stated that his family would have no more than two children. In Vancouver at the moment, a group called World Population Balance is running an ad campaign encouraging families to have fewer children due to fears of overpopulation.

I am a mother of three, and have experienced firsthand and how the size of my family gets treated like it is public property. Complete strangers ask me about things that I consider to be very personal. After my first baby was born, I got questions about if and when my husband and I would have a second. Then after we did welcome our second baby, the questions started to revolve around whether our family was now “complete.”

Now that I have three children, the questions have shifted again. Just a few weeks ago, a casual acquaintance asked me if my third pregnancy was “planned.” My middle child looks quite different from his two siblings, so I sometimes get asked if all three are mine.

My three children are still within the acceptable range of family size – but just barely. Parents who have more than three are met with amazement at best, and often with outright derision and hostility. Journalist Mollie Hemingway calls this “Fecundophobia.”

Hemingway wrote in The Federalist:

The choice of whether to have kids or not is held so sacrosanct that our laws permit the decision to be made many months after a new human life begins. Some even advocate extending the choice to a period of time after birth. So why the weird reaction to people receiving children as a blessing instead of fighting them tooth and nail with hormones, chemicals, surgery and scissors?

Our society has a double standard. A woman’s right to choose is treated as all important, but only so long as she “chooses” to have a small family. Hemingway continues, “Keeping the womb empty at all costs during all, or nearly all, of one’s fertile years is the sine qua non of modern American womanhood. Woe to the woman who ‘chooses’ otherwise.”

The example set by prominent, public individuals can help to shape our culture. Perhaps if Barrett is confirmed to the Supreme Court, society will become a little bit more accepting of large families. That would be a welcome development.