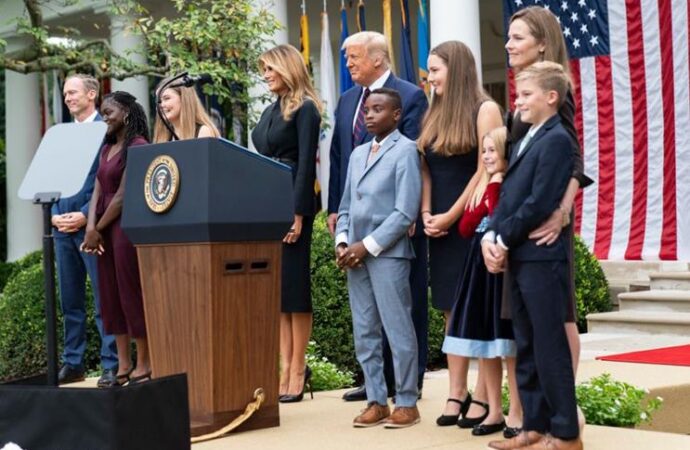 In 2017, the media reported that Ringling Brothers and Barnum & Bailey Circus was closing after a run of 146 years.

I beg to disagree. The circus moved its three rings, lion tamers, and clowns to Capitol Hill, and the latest act is about to begin.

In his essay “Democrats Take Aim At Amy Coney Barrett,” Kurt Schlichter examines the tactics Democrats will likely deploy against Barrett during the upcoming Senate Judiciary Committee hearings on her nomination to the Supreme Court.

Barrett is a mother of seven, including two adopted Haitian children, and Senate Democrats may criticize her, as some commentators are already doing, for bringing so many children into a world beset by global warming and for acting as a “colonist” by adopting two children of color.

Barrett is a devout Roman Catholic, and some senators may launch an attack on her faith, claiming her religious beliefs will interfere with her ability to weigh law and policy.

Undoubtedly, they will also dig into her past for evidence of wrongdoing and character flaws having little to do with her abilities as an attorney or judge.

As yet another Big Top spectacle opens on Capitol Hill, Schlichter reminds us that the media will also have a field day. He warns us of the headlines coming down the pike: “Racist Nominee Thinks Healthcare Is Unconstitutional Because She Likes Jesus.”

Talk about a strange reversal in our values.

Not even thirty years ago, most rational Americans would have found much to admire in a woman like Amy Coney Barrett. She is accomplished in her profession, is apparently a good mother, loves her husband, won praise as a teacher from her students, and is, according to many who know her, kind to others.

Have we sunk so low that what were once virtues are now vices?

How did faith in God, for example, become a stumbling block to public service? Those who wrote our Constitution didn’t think this way, in fact their document expressly forbids religious tests for public servants. Barrett is associated with a charismatic interdenominational group, People of Praise, that encourages family and prayer. Though many Christians, Catholic and Protestant, identify as charismatics, Barrett may come under fire for belonging to such a group. A warning, dear committee members: tread lightly lest you trample the faith of hundreds of millions of Christians.

How about motherhood? Do some now regard having children as a curse rather than a blessing? Apparently so, though once children were regarded as America’s greatest resource. Are we really going to take to task a woman who is trying to educate her children and make them decent adults? Besides, those who criticize moms for bearing and raising more than one or two children need to examine some statistics. America’s birth rate is now well below replacement level, and that number continues to fall.

Can they attack Barrett for her professional work as an attorney, professor, and judge?  We’ll see. So far, many in that profession, including those who disagree with her judicial philosophy, praise her legal brilliance. Harvard Law professor Noah Feldman, who once clerked with Barrett, writes that “Barrett is highly qualified to serve on the Supreme Court” and that she “had the ability to bring logic and order to disorder and complexity.”

Can they savage Barrett for her personality? From all reports, Barrett was a beloved professor and mentor while teaching at Notre Dame. As Chase Giacomo, one of her former students, writes in “Amy Coney Barrett: An Unlikely Mentor,” Judge Barrett “has never let differences in background and experiences stop her from caring, listening, and helping those she encounters.…” Giacomo reports that when Barrett was asked in an interview how she wanted to be remembered, “her response was for people to say that ‘she loved well.’”

Of her personality, Feldman offered this comment – and remember, he calls himself a liberal:

To add to her merits, Barrett is a sincere, lovely person. I never heard her utter a word that wasn’t thoughtful and kind — including in the heat of real disagreement about important subjects. She will be an ideal colleague. I don’t really believe in ‘judicial temperament,’ because some of the greatest justices were irascible, difficult and mercurial. But if you do believe in an ideal judicial temperament of calm and decorum, rest assured that Barrett has it.

We can only hope that that the members of the Senate Judiciary Committee exhibit a similar temperament of calm and decorum.

In more judicious and less fractious times, Amy Coney Barrett would win accolades for her accomplishments, be held up as a role model for our daughters, and be respected as a jurist for her capabilities on the bench. In her personal life and in her practice of her religious faith she offers an example of virtue and goodness that should make all Americans proud she is one of us.

Isn’t it about time we abandoned our upside-down values and give respect where respect is due?