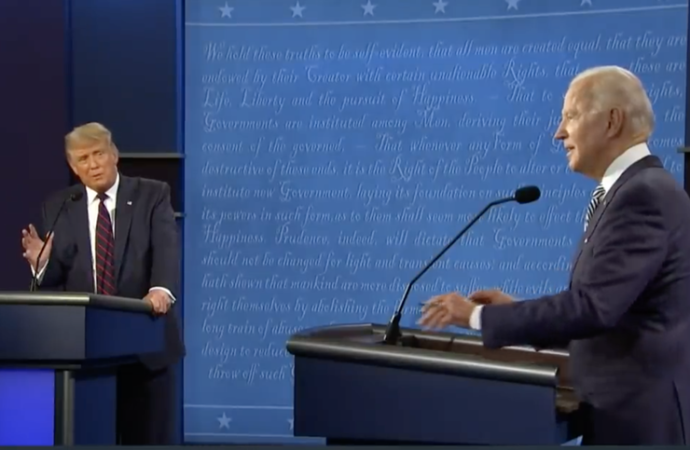 The first presidential debate of 2020 set a new floor for civility. While President Donald Trump strong-armed his way past an oftentimes timid, rambling, and confused former vice president, it was surprisingly Joe Biden who debased himself by engaging in grade school name calling.

Biden’s frustration may have been sated by calling Trump a “clown,” a “racist,” and telling him to shut up, but by lowering himself to a level Trump did not reach, Biden’s claim that the incumbent was acting “unpresidential” rang quite hollow.

A visibly exasperated Chris Wallace achieved as much as can be reasonably expected when attempting to control two men vying for the leadership of the free world, neither of whom cared to be contained. Trump’s verbosity made it next to impossible for Wallace to come across as anything but biased against Trump thanks to the equal time considerations Wallace was beholden to. While he lost control of the debate at times, his questioning and follow ups pressed the Democratic nominee far more than any moderator in recent memory.

Wallace’s most pointed question came early on, when he asked Joe Biden if he would support his Democratic colleagues’ plans to either end the filibuster or pack the Supreme Court to ensure a liberal majority. Biden’s response?

Whatever position I take on that, that’ll become the issue. The issue is the American people should speak. You should go out and vote. You’re voting now. Vote and let your senators know how strongly you feel. Vote now.

While Wallace should have followed up on the question himself, perhaps he decided Trump’s multiple reiterations of “Are you going to pack the court?” were sufficient. Besides, Biden’s non-answer is all the answer we needed, and almost ranks as the gaffe of the debate.

But Trump had his own easily avoidable gaffe which the mainstream media fell over themselves to emphasize.

Wallace asked, “Are you willing tonight to condemn white supremacists and militia groups…?”

While Trump was right to point out the left-wing violence of groups like Antifa (which Biden ridiculously called “an idea, not an organization”), the president took what should have been an easy question and complicated it by sidestepping Wallace’s direct prompt.

Honestly, how hard is it to say “Yes of course I condemn white supremacists. I condemn their hateful ideology and their violent tactics. And you know what? I’ve condemned them before.” That’s all he needed to say, and then he could have proceeded to launch into a clean and devastating attack on the hate and violence spread by Antifa, and it would have been all the more powerful a condemnation as a result.

While Trump’s aggressive interruptions may not have come across as the most congenial, there is little doubt as to their effectiveness. Biden, who struggled to get through large policy statements in the first place, was left completely flustered by the continual running commentary Trump provided in the midst of his remarks. While the effect on Biden’s speech was evident, Trump missed opportunities to correct Biden’s understanding of several important issues.

For example, when Biden tried to place the entirety of the blame for COVID-19 on Trump’s shoulders, Trump could not resist playing the strongman. Instead, he should have explained the nuances of federalism – our compound form of government in which the national and state governments share differing powers – to a man who spent more than four decades in elected federal office. One could even have applauded a deeply condescending response if Trump had just had the wherewithal to lecture Biden on how the Constitution actually works.

Instead Trump actually said that his administration was responsible for shutting down the U.S. economy. That not only does him no favors, it is factually untrue since shutdowns were, and continue to be, administered on a state-by-state basis.

But the surprise highlight of the debate came when Wallace basically asked Biden if he was an anti-vaxxer.

You say the public can trust the scientists, but they can’t trust President Trump. In fact you said that again tonight. Your running mate Senator Harris goes further saying, the public health experts quote, ‘Will be muzzled, will be suppressed.’ Given the fact that polls already show that people are concerned about the vaccine and are reluctant to take it, are you and your running mate Senator Harris contributing to that fear?

Biden attempted to deny that Harris said any such thing, but Wallace fact-checked him by restating the quote. Biden followed this up by calling Trump a liar again, not answering Wallace’s question, and instead casting further fear and doubt on the vaccine. What are we to think of a man who, without evidence, repeatedly calls disease treatments into question?

Trump also did a great job discussing COVID-19 shutdowns by bringing up deaths of despair and the ways shutdown themselves kill people. Biden meanwhile followed up a Wallace question noting the strong economic recovery during the pandemic by saying “you can’t fix the economy until you fix the COVID crisis.”

This not only is untrue, it was corrected by Wallace as he asked the question. The unemployment rate fell to 8.4 percent in August, down 6.3 percent from April when the COVID-19 shutdowns took off. In comparison, the 2008 economic collapse peaked at 10 percent unemployment in October 2009. The Obama administration didn’t see an unemployment rate of 8.4 percent or better until January 2012, 27 months after the peak.

In all, Trump spent his time talking about what he has accomplished, while Biden discussed what he would do rather than anything he accomplished in his decades in office. Trump was high energy for the entire hour and a half, while Wallace had to remind Biden of the question being asked multiple times right after they were asked.

Trump won the debate, but he had opportunities to completely blow Biden out of the water, and he blew it. Biden lost the debate, but the real loser was in all likelihood the emotionally drained Chris Wallace. As one of my colleagues put it: “Let’s start a GoFund me for Wallace for a good stiff drink.”