The School System Has a Prolonged Childhood Problem

There’s a secret that homeschool families have known for years but which is just now leaking to the general public.

Hints of this secret rear their heads in articles spotlighting families who never thought they would homeschool but are finding they love it. Hints also show up in polls asking parents how long their children spent on schoolwork during the spring lockdown period. These hints especially manifest themselves in the questions of worried parents such as the mother who asked if it was normal for her homeschooled kindergartener to finish the day’s lessons in an hour. (The answer? Yup, pretty much.)

In case the whisperings haven’t yet made it to you, I’ll let you in on the secret: homeschool lessons take a lot less time than those done in the classroom.

Before COVID, the quickness with which homeschoolers accomplished their daily lessons and moved on to higher grades could easily be brushed off by the belief that homeschoolers were brilliant, overachieving geeks. While it’s plausible that some were little Einsteins, many of them were just average individuals, but ones who weren’t held down by a school system and forced to wait for an entire classroom to move along to the next thing.

But it’s not only those in early grades who are realizing they can achieve much more in a shorter time frame when unconstrained by the traditional system. High schoolers are realizing the same thing through the option of dual credit.

According to a recent article from Education Next, dual credit classes – college courses taken in high school – are growing in popularity and will likely see even greater growth due to the pandemic. As the chart below explains, dual credit usage increased by 68 percent between the 2002-03 and 2010-11 school years. 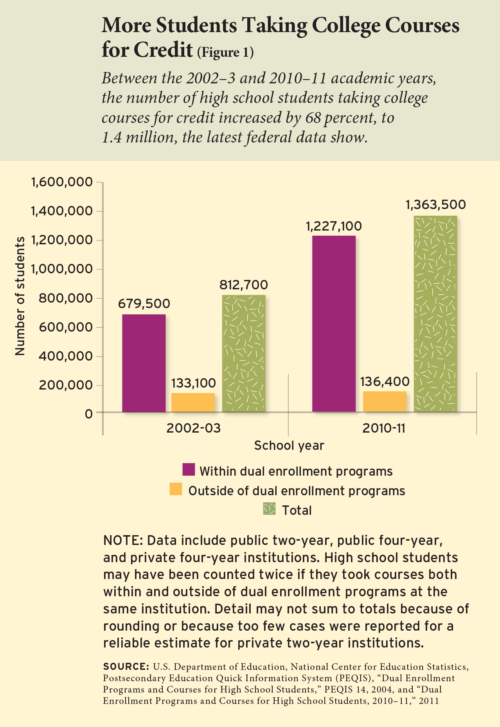 Students who take advantage of the accelerated learning dual credit offers not only save money on their college career, but they also build confidence knowing that they can handle the harder coursework of higher education:

‘When a student successfully completes a dual credit course, their mindset changes,’ said Michael Villarreal, a professor at the University of Texas at San Antonio who has studied the impact of dual credit. ‘They see that they can do college level coursework—that they are college material.’

Christian Martinez, the valedictorian at Mercedes High School, said taking dual credit courses gave him the confidence that he could succeed in medical school.

This rise in students maneuvering college courses in their high school years leads to the natural question: why are we making students wait until age 18 to go to college? Can they handle more challenging material at an earlier age? Are they, like younger students during COVID, discovering that life in the system holds them back from accelerating?

Life wasn’t always like this. Consider the early American founders. It was not unusual for them to be settled into careers by their early twenties, and numbers of them attended institutions such as Harvard when they were still in their early teens. If they could do it, why can’t today’s students?

British author Dorothy Sayers wondered the same thing in her famous 1948 piece “The Lost Tools of Learning.” She noted:

When we think about the remarkably early age at which the young men went up to the University in, let us say, Tudor times, and thereafter were held fit to assume responsibility for the conduct of their own affairs, are we altogether comfortable about that artificial prolongation of intellectual childhood and adolescence into the years of physical maturity which is so marked in our own day? To postpone the acceptance of responsibility to a late date brings with it a number of psychological complications which, while they may interest the psychiatrist, are scarcely beneficial either to the individual or to society. The stock argument in favour of postponing the school leaving-age and prolonging the period of education generally is that there is now so much more to learn than there was in the Middle Ages. This is partly true, but not wholly. The modern boy and girl are certainly taught more subjects—but does that always mean that they are actually more learned and know more?

Sayers finds that doubtful, and given the above developments in recent education, so should we.

Could it be that in this time of global upheaval, we may be stumbling onto the fact that students have been stifled by the education system? Have we held them down, making them trudge along at the pace of a classroom of 30 children, preventing any individual from getting ahead, and forcing them to stay in a petri dish of extended childhood long after they are ready and able to move on to more mature learning?