Garden or Graveyard: What Will Be Our Legacy? 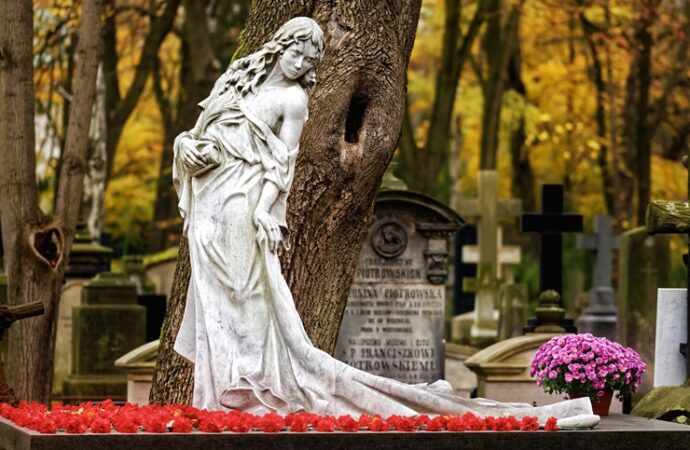 This morning I came across the following quote by Ray Bradbury while looking for his observation: “You don’t have to burn books to destroy a culture. Just get people to stop reading them.” Bradbury says:

Everyone must leave something behind when he dies, my grandfather said. A child or a book or a painting or a house or a wall built or a pair of shoes made. Or a garden planted. Something your hand touched some way so your soul has somewhere to go when you die, and when people look at that tree or that flower you planted, you’re there. It doesn’t matter what you do, he said, so long as you change something from the way it was before you touched it into something that’s like you after you take your hands away. The difference between the man who just cuts lawns and a real gardener is in the touching, he said. The lawn-cutter might just as well not have been there at all; the gardener will be there a lifetime.

I read that gardening quote, brooding on it for a few minutes in light of the destruction occurring in parts of our country, not just the riots and flames that have destroyed shops, businesses, and lives, but also the ongoing, daily destruction of so many American souls – take that word as you will – by suicide, drugs, alcohol, savage social media attacks, and hatred for those with whom we disagree. This same foul mood inhabits our public arena, where some politicians and pundits now openly proclaim our Constitution dated or dead and wish to demolish the electoral system and pack the Supreme Court.

Have we in fact become a nation of destroyers rather than creators?

Once upon a time – yes, I use a fairy tale beginning, because whether we know it or not, America is a sort of fairy tale for many who have immigrated here – our country was famed as the land of creation. We once regarded ourselves as a can-do nation, a liberty-loving people, inventive, independent, and recognizing the American Dream as founded on those cherished words, “Life, liberty, and the pursuit of happiness.”

Like Bradbury’s gardeners, our ancestors left behind something good and true and beautiful that others might touch and remember them by. Whether it was a newborn child or sending a spacecraft to the moon, a Constitution unlike any the world had ever seen or the discoveries of a George Washington Carver, we looked at these monuments great and small, and remembered and honored those who bestowed us with such gifts.

Such people, thank heavens, still live among us. The older I get, the more I am astounded by the array of talents I see in the people around me. I know a contractor, for example, who invented and is now selling a pistol the size of a credit card, a woman who helped found a volunteer organization giving diapers and baby clothing to impoverished mothers, a man who is restoring the hundred-year-old building of a private boy’s school. Everywhere we look in America, we see the vast majority of our fellow citizens working to improve their lives and in doing so, to improve the world around them.

That is a country despised by some in our midst.

These despisers call for the dismantlement of our Constitution, advocating for the destruction of the Supreme Court and the Electoral College. These are the sorts of people who believe they know best how to govern the average American whom they regard as a dunderhead.

They also call for the destruction of our country. Recently, for example, CNN anchor Don Lemon said on air to his colleague, Andrew Cuomo, “We’re going to have to blow up the entire system.” Rep. Ayanna Pressley, D-MA said in early August that “There needs to be unrest in our streets for as long as there’s unrest in our lives.” Back in June, Greater New York Black Lives Matter President Hawk Newsome said, “If this country doesn’t give us what we want, then we will burn down this system and replace it.”

Not too many gardeners in that crew. They sound more interested in creating a bone yard than a land of milk and honey.

For the rest of us, the key to preserving our country, to increasing its bounties, and to pushing back against the tiny minority of radicals seeking our demise is simple. Let’s keep on being metaphorical gardeners, those who seek to leave behind the good and the beautiful, those who create rather than destroy.

When our descendants look, as Bradbury writes, at the tree or flower we’ve left behind, they’ll know we were here and bless us for it.