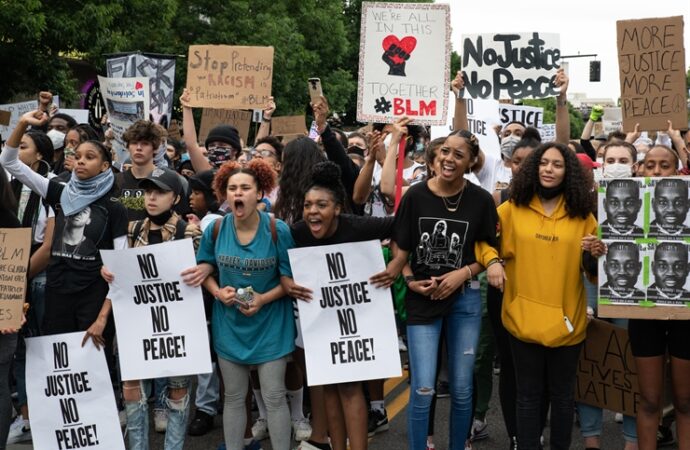 The page, titled “What We Believe,” included various public policy positions unrelated to police brutality and police reform. The Washington Examiner discovered on Monday the page had been removed.

“Page Not Found. Sorry, but the page you were trying to view does not exist,” the page now reads.

Black Lives Matter has removed its “What We Believe” page from its site.

The page included many beliefs and objectives that had nothing to do with police brutality or police reform, including a stated goal of disrupting America’s “Western-prescribed nuclear family structure.” pic.twitter.com/PkyeA8VBUR

The Wayback Machine archived the page, however, and it contains a lengthy description of the organization’s tenets and objectives. Among the views expressed is a desire to “disrupt” the traditional family structure.

“We disrupt the Western-prescribed nuclear family structure requirement by supporting each other as extended families and ‘villages’ that collectively care for one another, especially our children, to the degree that mothers, parents, and children are comfortable.”

According to the Examiner, BLM did not respond to the paper’s request for comment, so it’s unclear if the page was deliberately removed.

Whatever the case, BLM’s endorsement of this language should come as little surprise. As Brad Polumbo has shown, there are effectively two Black Lives Matter phenomena: the Black Lives Matter™️ organization and “black lives matter” as an informal movement.

The latter involves people fighting in good faith for police reform who believe African Americans suffer disproportionately from police violence. The former, Black Lives Matter™️, is an organization co-founded by Patrisse Cullors, Alicia Garza, and Opal Tometi that has roots in Marxism.

“We actually do have an ideological frame[work],” Cullors said of her organization in 2015. “We are trained Marxists. We are super-versed on, sort of, ideological theories.”

As I pointed out in a 2017 article, Karl Marx was interested in abolishing much more than just private property. In The Communist Manifesto, Marx and his associate Frederick Engels defend attempts by Communists to abolish the traditional family.

“Abolition [Aufhebung] of the family! Even the most radical flare up at this infamous proposal of the Communists,” Marx wrote. “On what foundation is the present family, the bourgeois family, based? On capital, on private gain. In its completely developed form, this family exists only among the bourgeoisie.”

Marx and Engels proceeded to compare the nuclear family to public prostitution, before explaining why it was natural and desirable for the institution to “vanish.”

“The bourgeois family will vanish as a matter of course when its complement vanishes, and both will vanish with the vanishing of capital,” Marx and Engels wrote. “The bourgeois clap-trap about the family and education, about the hallowed co-relation of parents and child, becomes all the more disgusting, the more, by the action of Modern Industry, all the family ties among the proletarians are torn asunder, and their children transformed into simple articles of commerce and instruments of labour.”

From where does this hostility to the family stem? Marx and Engels offered clues.

“The modern family contains in germ not only slavery (servitus), but also serfdom, since from the beginning it is related to agricultural services,” Engels wrote in The Origin of the Family, Private Property and the State, quoting Marx. “It contains in miniature all the contradictions which later extend throughout society and its state.”

“The issue was so central to the revolutionary program that the Bolsheviks published decrees establishing civil marriage and divorce soon after the October Revolution, in December 1917,” writes Harvard historian Lauren Kaminsky. “These first steps were intended to replace Russia’s family laws with a new legal framework that would encourage more egalitarian sexual and social relations.”

A 1926 article from The Atlantic, written by a woman living in Russia at the time, describes these efforts in detail. The term “illegitimate children” was abolished, and a law was passed that allowed couples to divorce in “a matter of a few minutes.” Legislation was introduced to eliminate distinctions between legal wives and mistresses, including granting property rights to the unmarried consorts.

“Chaos was the result,’ the Russian woman wrote. “Men took to changing wives with the same zest which they displayed in the consumption of the recently restored forty-per-cent vodka.”

About a half century later, the Chinese Communist Party introduced a different version of state-enforced family orchestration. It’s “one-child policy” (1979–2015), the most extreme population planning policy in world history, placed limits on the number of children Chinese families could have.

Decades before the policy went into effect, Party Chairman Mao Zedong (1893–1976) famously explained why it was necessary for the state to manage family procreation and the labor stock.

“(Re)production needs to be planned. In my view, humankind is completely incapable of managing itself,” Mao said. “It has plans for production in factories, for producing cloth, tables and chairs, and steel, but there is no plan for producing humans. This is anarchism—no governing, no organization and no rules.”

Even today the aversion to the traditional family remains strong in socialists. A 2019 article in The Nation titled “Want to Dismantle Capitalism? Abolish the Family” offers a glimpse of the modern socialist critique of the institution.

“We know that the nuclear private household is where the overwhelming majority of abuse can happen,” author Sophie Lewis explains. “And then there’s the whole question of what it is for: training us up to be workers, training us to be inhabitants of a binary-gendered and racially stratified system, training us not to be queer.”

For true believers of collectivism, there’s little question that private family matters are also state matters. Socialism requires collective control of resources, and humans are the ultimate resource. This is why the traditional nuclear family, which places authority in the hands of parents rather than the community, is an affront to so many socialists.

The scholar Robert Nisbet has explained that the family is one of the three pillars of authority outside the state, along with the church and civic organizations. All three of these institutions offer humans something essential to the human experience: community.

Nisbet believed all three pillars served as important checks on centralized political power, which is why Nisbet saw the decline of the family, church, and civic organizations in America as an ill omen for liberty.

“…the quest for community is an impulse that stems from human nature. All yearn for participation and for a sense of belonging within a cause or body greater than the single person,” Nisbet wrote in The Quest for Community: A Study in the Ethics and Order of Freedom (1953). “If the desire for community cannot be filled in church, in family, in neighborhood, or in locality, then it will be filled instead by the central State.”

It’s unclear why Black Lives Matter™️ scrubbed the anti-nuclear family language from its website. What’s clear, however, is that its previously stated goal to “disrupt the Western-prescribed nuclear family structure” fits the Marxist paradigm that stretches back a century and half.

Perhaps the removed page reflects a change of heart. On the other hand, it could simply be a tactic to conceal its Marxist roots. As Dan Sanchez and I wrote in a recent FEE article, in recent decades purveyors of socialism have shown a tendency to shun the Marxist label even while embracing its ideals.

”There are a lot of people who don’t want to call themselves Marxist,” Eugene D. Genovese, an eminent Marxist academic, told The New York Times in a 1989 article on the mainstreaming of Marxism in US universities.

We don’t know for certain why many individuals and groups advocating doctrines rooted in Marxism tend to reject the Marxist label—Cullors’s 2015 confession that she and Garza are “trained Marxists” appears to be a mistake of candor—but it seems likely adherents have gleaned a basic truth once observed by the writer Upton Sinclair.

“The American People will take Socialism, but they won’t take the label,” Sinclair observed in a private 1951 correspondence with fellow socialist Norman Thomas.

Many people and organizations of good faith support the black lives matter movement because they believe all people deserve equal treatment and due process before the law.

But Americans should be careful to not confuse the broader black lives matter movement with Black Lives Matter™️, an organization whose goals may be antithetical to freedom and family—even if they no longer say so.