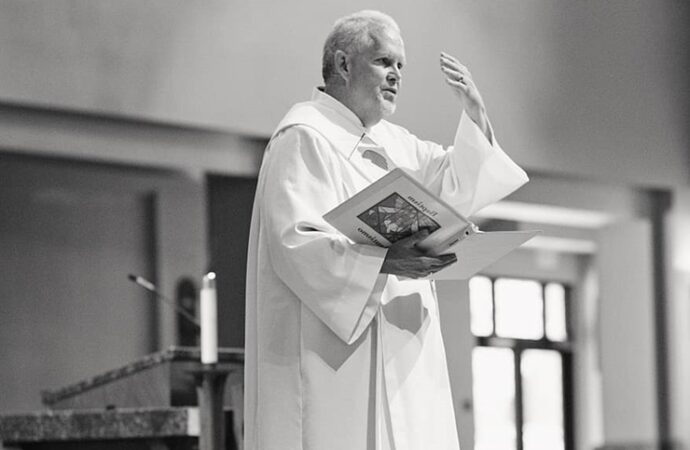 One of Jesus Christ’s most well-known sayings comes from the Gospel of Matthew: “Beware of false prophets, who come to you in sheep’s clothing, but underneath are ravenous wolves.”

Sadly, that warning became highly relevant last Sunday, when Fr. Kenneth Boller, pastor of the Church of St. Francis Xavier in New York City, asked that congregants bow their heads for a “racial justice” prayer that he led them in just before the end of the Mass. “I now invite you to stand, and joining [sic] us in the prayer for racial justice, by responding ‘yes’ to each of the following statements,” he began.

What followed was disgraceful: A priest of the triune God Almighty began mouthing poisonous, divisive, racial Marxist platitudes. Fr. Boller invited the demon of racial hatred into the sanctuary and presented it to his flock as their salvation (“Will you renew and honor this pledge daily knowing that our church and our community, our nation, and our world will be better places because of our efforts?”). But he should know better – for God alone is “the giver of life to our bodies, the good savior of our souls, and the guardian of our lives.”

What makes calling out this kind of behavior tricky, however, is the slipperiness of it; much of what Fr. Boller said sounds unobjectionable – like so much anodyne boilerplate. “Do you affirm the inherent worth and dignity of every person?” Of course we do! But this is the strategy: Conceal the presence of radical statements by sprinkling them among other decent and even laudable ones.

Fr. Boller does not say what he means either by “white privilege” or “culture of white supremacy.” And that’s not an accident. He simply expects his congregation to notice that he is “woke” by his use of trendy, vapid academic-speak, and he presumes that they will automatically fill in the meanings of these terms; that’s not a bad bet. After all, they’ve been propagandized ceaselessly in school and by the media for their entire lives to be receptive in that very way to precisely this sort of banal sloganeering.

For a Catholic priest to speak the language of the Church’s enemies is deeply shameful, not to mention frightening. No further proof is needed that the racial Marxists have a new conquest: American churches. But should you require more, watch this woman (who has yet to be apprehended) punch a kid in the face twice as he walks past her back to his pew during Mass.

We are witnessing in real-time the execution of the standard playbook of race-obsessed neo-Marxists, a playbook they have used since the 1960s to great effect. These revolutionaries have a stranglehold over every center of power in the country save the presidency and, to a lesser degree, the U.S. Senate – i.e., legacy and social media, K-12 education, universities, professional associations, Hollywood, the administrative state, and, now, corporations (through their human resources departments).

The method by which this happened now seems obvious, but it unfolded so gradually that it was easy to miss.

Step one: Covertly infiltrate an institution with inoffensive-sounding rhetoric and seeming support of regnant principles like liberty and meritocracy.

Step three: Leverage that department’s/subdivision’s disproportionate influence over the rest of the institution to steer the whole thing in a racialized direction, with the ultimate goal of remaking it to reject colorblind equality, due process, merit-based advancement, and freedom of thought and expression – and then project that rejection beyond its four walls into the entire country in concert with all the other similarly toppled institutions your comrades have seized and now control.

It’s disturbing that a rival faith has taken up residence in my Church and that my priests willingly and even eagerly say the prayers of this false religion. To their shame, they have forgotten the First Commandment: “I am the Lord your God, who brought you out of the land of Egypt, out of the house of slavery. You shall not have other gods beside me.”

Besides that, it is telling that they choose to speak in the subversive language of intersectionality – which reduces people to a laundry list of immutable characteristics and then ranks them according to a dehumanizing victimhood hierarchy, with white people as the eternal oppressors of allegedly sainted, oppressed minorities – rather than the plain language of our nation’s founding, the Declaration of Independence, which holds us all equal before God as brothers.

Nothing more needs to be said to rebuke race-based hatred, bigotry, and discrimination (to the extent those exist in modern-day America) than those justly famous, stirring words of the Declaration: “We hold these truths to be self-evident, that all men are created equal, that they are endowed by their Creator with certain unalienable Rights, that among these are Life, Liberty and the pursuit of Happiness.”

America’s continued survival depends on our relearning those sacred principles and reapplying them to the challenges of the 21st century to preserve the American way of life. Time is running out.