When Reparations for Slavery Become Just Another Welfare Program 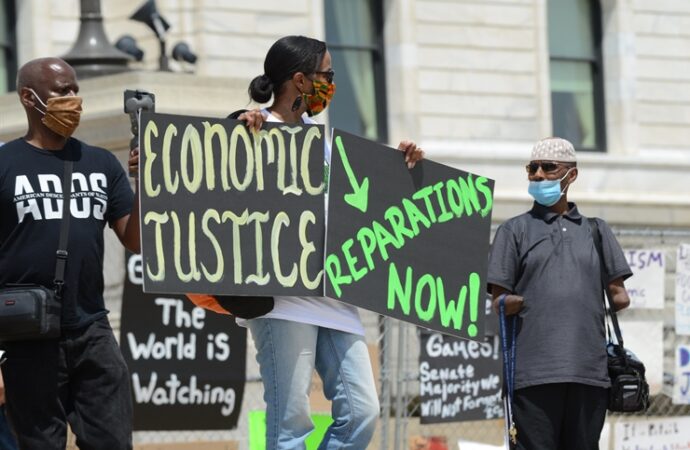 The idea that former slaves and their descendants ought to receive reparations for the wrongs committed against them is not new. Having grasped the fact that slavery is nothing less than kidnapping and theft committed against the enslaved, abolitionists long advocated for some form of redress for freed slaves.

The most famous early attempt to create a reparation program of sorts is likely General Sherman’s Field Order #15. Issued as a wartime measure, Sherman’s order – which never became widespread policy – divided plantations along the Atlantic Coast into forty-acre parcels to be distributed to forty thousand emancipated workers. Sherman’s motivation was likely military expediency rather than an attempt to compensate victims. Nonetheless, the idea that former slaves would receive “forty acres and a mule” became a symbol of an unfulfilled promise to provide compensation for lives of forced servitude. This variety of reparations, of course – as noted by Murray Rothbard – is morally and legally desirable:

On the libertarian homesteading principle, the plantations should have reverted to the ownership of the slaves, those who were forced to work them, and not have remained in the hands of their criminal masters. That is the fourth alternative. But there is a fifth alternative that is even more just: the punishment of the criminal masters for the benefit of their former slaves – in short, the imposition of reparations or damages upon the former criminal class, for the benefit of their victims. All this recalls the excellent statement of the Manchester Liberal, Benjamin Pearson, who, when he heard the argument that the masters should be compensated replied that ‘he had thought it was the slaves who should have been compensated.’

Demands for this this style of reparations – to be paid to specific victims by specific perpetrators – continued for a time. During Reconstruction, efforts to distribute former plantations lands to victims were proposed by the Freedmen’s Bureau but quashed by President Andrew Johnson. The first organization devoted specifically to reparations was formed in 1896, when Callie House and Isaiah Dickerson founded the National Ex-Slave Mutual Relief, Bounty and Pension Association. Other early efforts include a plan from Henry McNeal Turner, a prominent African Methodist Episcopal (AME) bishop, calling for $40 billion in reparations.

As time went on, however, it became increasingly clear that this was not going to happen soon enough for the former slaves themselves to enjoy any sort of compensation for labor and freedoms previously stolen.

Attempts to recover reparations became more geared toward general taxpayer-funded efforts and less reliant on one-time payments as a form of restitution.

For example, beginning during the 1940s, the Nation of Islam urged reparations for slavery and “called on the federal government to cede several southern states to become the territory of an African American nation” (Biondi, p. 7).

More elaborate plans followed. In 1969, James Forman presented his Black Manifesto to the National Black Economic Development Conference, in which he demanded $500 million in reparations, which would be used to finance the institutional and infrastructural elaboration of a “Black Socialist State”:

Foremost among the proposals of the Manifesto was the use of $200,000,000 to fund the creation of a ‘Southern land bank’ to protect tenant farmers evicted from their homes in retaliation for political activism and to support the efforts of those wishing to establish cooperative farms. There were proposals for the establishment of publishing houses, television stations, and ‘a Black University in the South.’

By 1969, more than a century since emancipation, the idea of compensating specific former slaves (or their heirs) had clearly given way to what was to resemble what the National Urban League would call a domestic “Marshall plan for Negro Citizens” as early as 1963. In 1990, for instance, the Urban League again called for this “Marshall Plan” at the end of the Cold War, arguing that the end of the Soviet threat had freed the U.S. up to engage in “rebuilding” its urban centers. In 2018, the the Congressional Black Caucus introduced new legislation deemed a “Marshall Plan for Black America.”

This April 2020 report from the Brookings Institution suggests that reparations take the form of student loan forgiveness, free college tuition, and down payment grants for potential homeowners.

This has now become the standard policy formula for reparations. It’s not about payments to specific victims. It’s about increasing funding for the usual package of social programs around housing, cash transfers, and healthcare. In other words, in its form and administration, the “reparations state” is now indistinguishable from the “welfare state.”

But this doesn’t mean the idea of cash payments to specific descendants of slaves has been completely abandoned.

The idea has been revived in recent decades by new legal and legislative developments. This includes 1988 legislation adopted by Congress in which victims of Japanese internment during World War II received $20,000 each. And in 1994, the State of Florida agreed to pay reparations to the survivors of the 1923 Rosewood massacre.

These events revived interest in the old idea of direct reparation, but naturally complications were immediately apparent. The payments to victims of internment and the Rosewood massacre were to specific individuals. Moreover, their numbers were far smaller than the millions of descendants of formers slaves currently residing in the U.S. today.

Nonetheless, the Brookings report implies that a grant of more than $100,000 to each household would be necessary to close the “wealth gap” between whites and blacks. Economist William Darity suggests that closing this wealth gap requires transfers of up to $12 trillion. Other proposals claim totals in excess of $16 trillion, a sum approaching the size of the entire U.S. gross domestic product.

Needless to say, a reparations program of this magnitude is exceedingly unlikely to happen. Even in our current era of trillion-dollar bailouts, handing over $10 trillion dollars to satisfy a single interest group is unlikely. Not even New York bankers have managed that feat.

However, the reparations issue is unlikely to disappear any time soon, because it will remain useful to the debate over taxpayer funding of the welfare state. As such, calls for reparations remain part of a toolbox for demanding that ever greater sums be poured into social programs. That’s an important tool that no savvy fundraiser, politician, or lobbyist is likely to give up.