The Bombings Ended the War but Birthed a Destructive Superpower 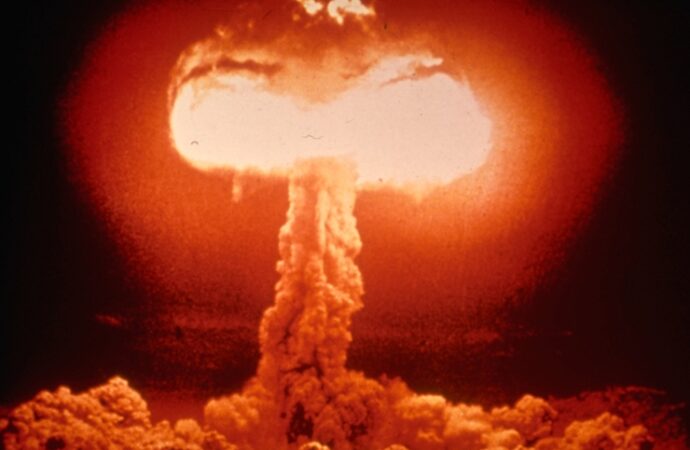 The bombing of Hiroshima and Nagasaki signaled the end of World War II, but it also signaled the beginning of postwar American power. The U.S. used its weapon status to control a new international order that has prevailed for the last 75 years.

Modern orthodoxy tells us that America gained its status as world hegemon because it essentially saved the world from the Nazis and Japanese militarists and rebuilt Europe after 1945, creating lasting international alliances along the way. But ending the war in the Pacific with what one UPI report at the time called a weapon with “potentialities [that] stagger the imagination,” is what really cemented America’s status as the world’s superpower.

For decades children at school desks worldwide learned many things about the war and the start of the nuclear age. It is no surprise therefore that that their lessons are tinged with the version of events that U.S. leaders first propagated 75 years ago: that the bombings were necessary to end the war; that more would have died if they had not been used.

Volumes of ink have been spilled to defend those points. And much has been written to argue that the sheer demonstration of atomic power served as a deterrence against ever unleashing it again, even as an arms race raged over the next several decades. By using the bomb first, the narrative runs, the U.S. not only ended a world war, but as a liberal democratic leader, has been an ideal steward of nuclear weapons.

Clashing with this flattering picture is the fact the U.S. has engaged in some 188 military interventions since 1945, according to researcher Monica Duffy Toft. On the plus side, the U.S. has never again used a nuclear weapon since 1945.

That the U.S. started what became the nuclear arms race, building around it a massive military industrial congressional complex that gave the postwar national security state new resources (this is when the CIA and the Department of Defense were created), is apparently of no matter. Since 1946, Washington has decided when international nuclear arms should be controlled, has initiated international testing bans and nonproliferation treaties, and determined which countries may and may not have atomic weapons. In his newly updated book, Scorpion King: America’s Suicidal Embrace of Nuclear Weapons From FDR to Trump, former UN weapons inspector Scott Ritter notes that there was an initial wrangling among President Truman’s top men over whether the U.S. would pursue a monopoly on nuclear power or hand it over to shared international controls. The former prevailed, and “by August 1946, the U.S. atomic bomb production line was pumping out bombs at a rate of two per week. Never again would the United States allow itself to be a nation void of a meaningful nuclear strike capability.”

The official reasoning behind dropping the bombs was tactical: to end the war and reduce the carnage of a protracted conventional war. The possibility of ending the war with a negotiated peace was not even to be an option. Afterwards nuclear primacy was seen as strategically necessary: in February 1946 George Kennan sent his “long telegram” and Winston Churchill delivered his famous “iron curtain” speech the following month. “The United States, convinced of Soviet perfidy, believed it had no choice but to exploit its atomic bomb monopoly to construct systems of western security that could withstand Soviet pressure,” writes Ritter.

But the results were existential. Along with the heavily managed “glorious war” and savior narrative, a “Greatest Generation” was able to birth for the first time an American Exceptionalism that has justified the attempt to build an American-controlled world order. Having at least a temporary monopoly on the bomb and at the same time being in better economic shape than the Soviet Union, Japan, Germany, or even our allies in England or France, America assumed the role of global policeman. Since then, Washington has started and then left unfinished several wars, often fueling new global catastrophes for which the U.S. is “forced” to intervene endlessly. Much of this (Korea, Vietnam, and so-called Reagan Doctrine era support for regime change wars in the Americas and the Middle East) was done during the Cold War in the name of fighting communism. But as in the 1953 coup in Iran, where the U.S. removed an elected leader for one who was friendly to Western oil interests, American hegemony has not always been made to serve noble ends. The same goes for siding with Iraq’s Saddam Hussain against Iran when it was strategically convenient, then toppling him when it was not.

Just as we do not know exactly how many lives were saved because of the bomb, there may also be no way of determining if additional carnage might have been avoided in later wars if the U.S. had practiced a more restrained foreign policy. We can estimate, however, that upwards of 220,000 Japanese died as a direct result of the blasts in Hiroshima and Nagasaki.

The explosion of the atomic bombs in 1945 strengthened a certain narrative that accompanied this conflagration. It is that the U.S. only engages in bloodbaths for highly ethical ends, always acting for the benefit of the free world, to advance human rights, and to contain or eliminate dictators. One reason the American government wished to occupy and not only defeat Japan in 1945, was to be able to try war criminals, which it did in Tokyo as well as in post-war Germany. This presumably was to be the icing on the cake of righteous war. Here the spirit of revenge combined easily with moral arrogance.