On This Day, the Berlin Wall Began to Rise 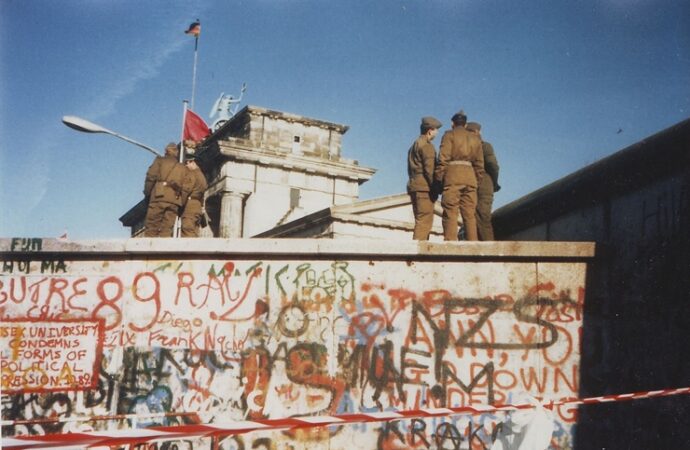 East Germany, formally known as the German Democratic Republic (GDR), wanted to be a paradise for the common folk. It called itself a “workers’ and peasants’ state.” Its anthem, “Risen from Ruins,” brought to mind a phoenix rising gloriously from the ashes of World War II. From cradle to grave, the East German government cared for its citizens, providing childcare, housing, and job assignments.

Even now, shops peddling goods from the GDR years dot the former East. They appeal to those afflicted with Ostalgie, nostalgia for life under the bygone socialist regime.

But despite the modern, sanitized images of East Germany – from the tourist haven of Checkpoint Charlie to the toy Trabants present in every souvenir shop in Berlin – the GDR went to extreme lengths to keep its citizens in line, tracking millions of people with unprecedented surveillance and driving them to unimaginable paranoia. One of its most brutal tools, the Berlin Wall, took root 59 years ago today.

On August 13, 1961, Berliners awoke to find the city transforming before their eyes. Overnight, East German troops had razed streets along the border, laying barbed wire in their stead. As construction continued, soldiers and citizen militia groups stood guard along the border, ready to quell any large uprising. Crowds gathered in West Berlin that evening and wept for the loved ones they were now removed from. It came to be known as “Barbed Wire Sunday.”

John F. Kennedy famously remarked, “Freedom has many difficulties and democracy is not perfect, but we have never had to put a wall up to keep our people in, to prevent them from leaving us.”

East Germany’s people had, in fact, been leaving. From farmers to members of the intelligentsia, workers sought higher wages and better opportunities in the West. From 1949 to 1961, roughly 2.5 million East Germans emigrated. In just a six-year span, “4,334 doctors and dentists, 15,536 engineers and technicians, 738 professors, 15,885 other teachers, and more than 11,700 other college graduates” were drawn westward. East Germany grew concerned. It feared looking weak, and besides, this massive brain drain would throw a wrench in the system-for-all it so proudly operated, which provided free education and healthcare to citizens.

To put an end to the exodus, Nikita Khrushchev approved East German leader Walter Ulbricht’s proposal to build a physical fortification. Ulbricht kept his plans under wraps. Just two months before Barbed Wire Sunday, he declared at a press conference, “Nobody has any intention of building a wall,” all while his government purchased incredible quantities of barbed wire, concrete reinforcements, and timber.

Years of fear and months of meticulous planning preceded the fateful events of August 13, 1961. But to the eye of any Berliner, the wall truly did begin to rise overnight. Emigration dwindled precipitously. Between 1962 and 1988, migration rates were about one-sixth of what they’d been from 1949 to 1961. Hidden from the world, East Germany was now fully free to pursue its awful agenda. What began as a length of barbed wire would transform a nation and its people for decades.

Life in East Germany was ruled by distrust. In order to keep its citizens in check, the government deployed a massive system of informants who aimed to know everything about everyone. They were collectively known as the Stasi, and at the peak of their operations, they kept files on 5.6 million East Germans.

No totalitarian government deployed spies to the extent that East Germany did. In the Soviet Union, roughly 480,000 full-time KGB agents oversaw a population of 280 million people – one agent for every 5,830 citizens. Estimates of Nazi Gestapo operations put the count at one officer per 2,000 citizens. The Stasi, when taking officers and informal part-time collaborators into account, employed one informant per 6.5 citizens. They enlisted over 2.5 percent of the adult population of East Germany – to put that into perspective, roughly the same percentage of the American workforce is employed in fast food service.

The result of Stasi diligence was a bank of information that enabled the government to manipulate and prosecute its people. According to Anna Funder, author of Stasiland: Stories from Behind the Berlin Wall, “Laid out upright and end to end, the files the Stasi kept on their countrymen and women would form a line 180 kilometres long.” That’s longer than the distance from the boundary of West Berlin to the Inner German border.

Nothing was safe. Phone lines were tapped, apartments were bugged, and private conversations were exposed. Neighbors, coworkers, and friends turned against each other.

East German authorities sought to cultivate a society of togetherness. But perhaps the most unifying aspect of life in the GDR was the utter fear that citizens had toward their countrymen. The true leveling effect, in that sense, was the knowledge that everyone was being watched, and there was nothing to be done about it.

Far more than psychological torture took place in the GDR. East Germans attempting to enter West Germany risked it all – border guards were ordered to shoot crossers on sight. Around 5,000 people took the risk, and an estimated 600 were killed. Around 100 people died at the Berlin Wall alone.

One of the most famous victims was just 18 when he attempted to flee the GDR. Peter Fechter somewhat spontaneously resolved to scale the wall with a colleague. His partner reached the West, but Peter was shot by East German border guards. Severely wounded, he fell. West German guards threw him bandages and a crowd of West Berlin citizens begged East German authorities to save him. But they did nothing, and in full view of the public, Peter succumbed to his injuries. His death inspired indignant riots in West Berlin that evening, and today, a memorial stands where he died. It reads, “He just wanted freedom.”

Media coverage of border casualties was shamefully contorted. The state newspaper, Neues Deutschland, painted Fechter as a homosexual who had been driven to suicide. Another young victim, Günter Litfin, was described as a prostitute and a criminal. Fully in line with its culture of paranoia and suspicion, the GDR made its citizens see those who attempted to flee as entirely unsympathizable opponents of the benevolent state.

Even East Germans who never came close to crossing the border faced grave danger. Political dissidents were often sent to Stasi jails, where they were beaten, raped, and subject to lengthy solitary confinement. The most infamous of these facilities was Berlin-Hohenschönhausen, which held thousands of prisoners over its 44 years of operation. Many citizens stayed for years without legal recourse, enduring months of interrogation, sleep deprivation, and physical exhaustion. In a six-year span, nearly 1,000 prisoners died at Hohenschönhausen.

In fact, this was the fate suffered by Charlie, who authored the poem below. His premonition proved correct – his land ultimately did kill him. Charlie endured several periods of imprisonment for daring to be a “subversive,” publishing critiques of the GDR that angered the Stasi. His final arrest came in 1980. Charlie’s widow received word that he had hanged himself, but all signs pointed to his murder at the hands of the state. For daring to speak freely, he was killed.

November 9, 1989, the day the Berlin Wall fell, marked the triumph of freedom over communism. At long last, families could reunite and dissidents of the GDR no longer lived in fear.

There are few days more symbolic – or moving – than November 9. But August 13 deserves equal commemoration. On that day, a nation laid the physical foundation of decades of suppression and murder. The East German government robbed its citizens of expression and agency in the name of security and productivity. Though freedom prevailed, it took decades, and many of its most ardent defenders died behind the Berlin Wall.

Reunification brought its own challenges. After so many years partitioned from the world, East Germany had a difficult time reentering it. Indeed, the disparity between the two Germanies was so great that two-thirds of East Germans believe that East Germany was “overwhelmed” by West Germany during reunification. Some traumas simply haven’t faded.

Berlin and Germany remain divided both consciously and unconsciously, intentionally and unintentionally, physically and mentally. A cobblestone inlay bisects Berlin’s city center along the wall’s former path, an unimposing reminder of what was once one of the most fortified borders in the world. Now, millions of tourists cross the divide as effortlessly as they cross the road.

Modern Germany is deceptively unified – so much so that it has become easy to relegate the cautionary tale of the GDR to the history books. But the ideology that gave rise to the Berlin Wall persists around the world. For as happily as we celebrate the day it came down, the day it rose must always stand as a testament to how easily freedom can fall victim to absolutism.

I have made myself sick with silence

I have wandered, lost

I hunkered down to see

What will become of me.

I held myself tight

So as not to scream.

-But I did scream, so loud

That this land howled back at me

As it builds its houses.

I have been sown

Only my head sticks

Defiant, out of the earth

But one day it too will be mown

–– By Karl-Heinz “Charlie” Weber, excerpt from Stasiland: Stories from Behind the Berlin Wall by Anna Funder