Is ‘Black Lives Matter’ Compatible With the American Tradition? 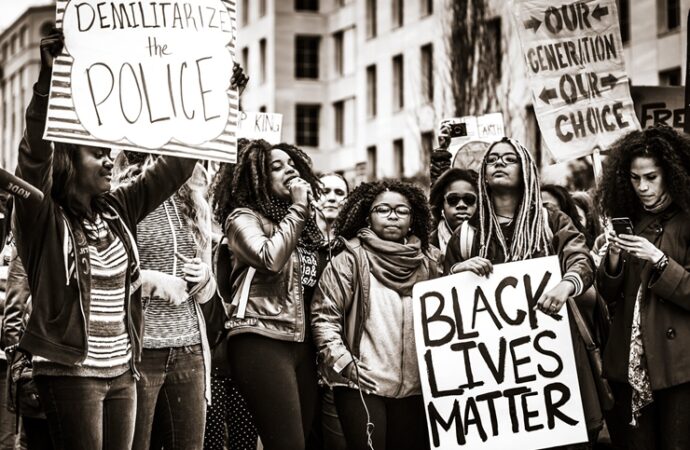 Although they operate under the banner of social justice, the Black Lives Matter (BLM) movement and its allies are a pernicious force. The false narratives, the toleration of lawlessness, and the punishment of dissenters have left our society in disarray. Americans of all races and political stripes should reject these tactics.

The problems with BLM start with its false claim that white police and civilians are systematically killing black people. Allied media have promoted cases that seem to fit this narrative, such as the deaths of George Floyd and Ahmaud Arbery, but the outrage is selective. In a country as large as the United States, reporters can find individual incidents to support just about any narrative they want.

The statistics on race and crime tell a very different story than the one advanced by the anecdotes favored by the media. First, black Americans are far more likely than non-blacks to commit violent crime. Blacks accounted for 37 percent of all arrests for violent crime in 2018, including 53 percent of murder arrests, despite constituting only 13 percent of the population. It is this fundamental disparity in base rates of crime that generates so many encounters between blacks and police in the first place. Once we adjust for base rates, police are less likely to fatally shoot black suspects compared to white suspects – a fact that is entirely at odds with the BLM narrative.

Even the evidence that police may be rougher with (but not more likely to kill) black suspects needs to be viewed in the context of base rates. While we should welcome any reforms that will make law enforcement more fair and effective, police cannot be blamed for noticing that some groups tend to be more dangerous than others. Black men are 6 percent of the population but have perpetrated 42 percent of cop killings over the past decade. That fact is surely relevant when police are required to make threat assessments with limited information.

As for white civilians victimizing blacks, here the BLM narrative is not merely wrong, but backward. When violent incidents occurred between blacks and whites in 2018, 90 percent of the time the attacker was black and the victim was white. Historically, black crime was the primary driver of “white flight” from northern cities, and it is still a major reason why whites are reluctant to live in majority-black neighborhoods or to send their children to majority-black schools. The media’s emphasis on white-on-black crime therefore must be especially perplexing to white audiences – some of whom likely are thinking, “There’s a protest over interracial violence, and we are supposed to be the villains?” This is the divisiveness that BLM’s one-sided narrative fosters.

The protests in service of that narrative have brought forth a disturbing toleration of lawlessness. Whether the protests have been “mostly peaceful,” as the media are apt to describe them, is irrelevant. It is undeniable that lawbreaking has occurred; it has sometimes been inherent to the protests, as with the toppling of statues or attacks on government buildings; and the response from the authorities has often been indifference. The burning down of a police station in Minneapolis and the creation of a so-called “autonomous zone” in Seattle are just the most visible instances of lawlessness that include widespread looting and vandalism unchallenged by the police. Some cops have even taken a knee in submission to the protesters.

No nation can prosper without the rule of law. If lawbreaking is tolerated merely because rioters have safety in numbers, or because some officials think the violence supports a “good cause,” then we will never have the order necessary to maintain our First World standard of living. Certainly the confidence that citizens have in the authorities has already weakened. Some have even asked why they should continue to pay taxes when the government refuses to perform its most basic duty of arresting lawbreakers. There is no good answer.

To restore order, we must condemn all unlawful acts without reservation. Express no sympathy for lawbreakers. If one or both political parties do not proactively condemn criminal acts, demand they take a position. Call on public officials to allow police to do their jobs.

Speaking out is risky, however, because opposing BLM can be a fireable offense. Newspaper editors, educators, and even religious figures have lost their jobs for raising objections to the protests. Now the BLM mantra emanates from organizations once thought to be apolitical, such as tech companies and sports leagues. When this groupthink combines with our growing “cancel culture” – which posits that people with unfashionable views should not merely be criticized, but shunned – ordinary citizens may be scared into silence.

The mob’s power grows with each cancellation, so defeating it requires a concerted effort to resist its demands. Broad declarations in favor of free speech are welcome, but more effective would be robust defenses of specific people who are targets of cancellation. Publish them. Hire them. Proclaim that their views, even if not popular, still have a place in the public square.

In addition to supporting individuals, we should reject demands to purge words or objects in the name of social justice. No person of sound mind is harmed by Thomas Jefferson’s statue, or by Uncle Ben’s rice, or by the term plantations in the state of Rhode Island’s full name. Calls to remove them are part of a never-ending attempt to condition ordinary people into believing that they owe activists something, and such compliance breeds only more demands.

Factual evidence, peaceful streets, and open discourse are the hallmarks of democratic governance. Because BLM flouts all of these values, it deserves our condemnation.