How ‘Wokeness’ Is a Product of Marxism 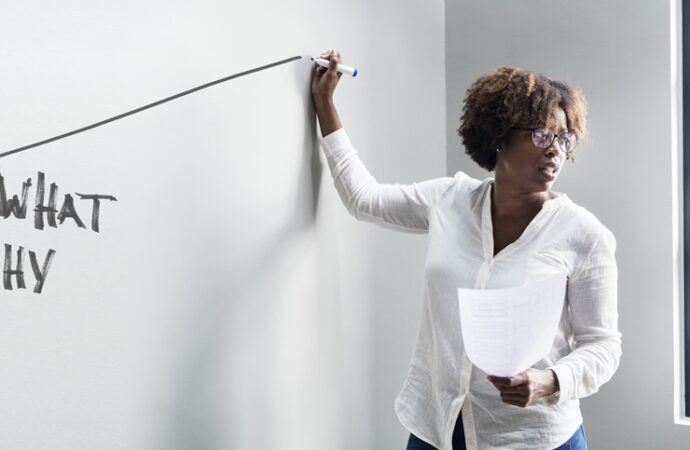 “Wokeness” has become the nomenclature for the ideology or mentality of radical leftist activists on college campuses, at protests, and on social media.

But wokeness has not been limited to just a handful of activists. It’s becoming a dominant mindset in the American workplace, in both the public and private sectors, as a method to promote “anti-racism.”

A Heritage Foundation panel on July 24 addressed first what wokeness actually is, but also how it has crept into corporate boardrooms and why it’s such a problem.

Angela Sailor, vice president of The Feulner Institute at The Heritage Foundation, said that “pervasive trends under the guise of equality makes diversity training in government, and corporate America, and schools, destructive, divisive, and harmful.”

James Lindsay, the co-author of a forthcoming book, “Cynical Theories: How Activist Scholarship Made Everything about Race, Gender, and Identity—and Why This Harms Everybody,” says wokeness is actually a combination of many different ideas.

“Wokeness is a fusion of the critical theory school of neo-Marxism, which is a form of identity politics, and radical activism that has a very particular worldview that separates the world into liberationists versus oppressors or oppressed versus oppressors,” said Lindsay, whose book is set for release Aug. 25.

In other words, the truth is malleable, based on power and who drives the narrative of what truth really is. In effect, the truth is replaced by my truth.

Marxism is a mostly economic theory, with origins in the 19th century. Those ideas, he said, led to some of the worst atrocities in world history.

Traditional Marxist ideas were adopted but changed in the 1920s by Italian communist Antonio Gramsci and others, and became the project of the Frankfurt school of critical theory. That new theory focused more on shaping culture, Lindsay said, marrying traditional Marxism with Freudian psychology and other social theories to change the way people think.

The goal of postmodernists who were part of that movement was to “deconstruct the very meanings of things,” said Lindsay.

Those ideas reached a new phase with the writings of Herbert Marcuse, a Columbia University professor in the 1960s and 1970s who advocated radical activism based on identity politics.

But this radicalism burned out, Lindsay said, because its violence ultimately made it unpopular.

The radicals then left the streets and embedded themselves in our schools and universities.

“It has all of the conflict theory—separate the world into oppressor-versus-oppressed classes—with zero-sum conflict, no ability to agree or understand one another across those, and then takes on the postmodern understanding of truth being just politics by other means, which removes all of the brakes standing up against it,” Lindsay said.

Seeing the world through that lens is what constitutes wokeness.

Mike Gonzalez, a senior fellow at The Heritage Foundation and author of the new book “The Plot to Change America: How Identity Politics Is Dividing the Land of the Free,” explained how these ideas entered the workplace under the guise of combating racism and why they are so toxic.

“Anti-racism training is a con,” Gonzalez said. “These consultants get paid exorbitant amounts of money. Often these fees come from taxpayer funds.”

Though many of the advocates of wokeness are con artists, we have to take them seriously, Gonzalez said, because there is a strong ideological component to it.

“The true name of anti-racism training is consciousness-raising struggle sessions,” he said.

It’s used to demolish the “hegemonic narrative,” which in simpler terms, Gonzalez said, is simply “the American story, the American dream, the promise of liberty and prosperity that have attracted about 100 million immigrants from all over the world from 1850 to the present.”

Christopher Rufo, the director of the Center on Wealth and Poverty at the Seattle-based Discovery Institute and contributing editor at City Journal, has delved into how “anti-racist training,” together with the Black Lives Matter movement, has invaded the boardroom and government.

“This is now becoming the default ideology of the bureaucracy, and people are making, in some cases, millions of dollars offering essentially political indoctrination on the public dime to public employees,” Rufo said.

All levels of government, as well as nonprofits and corporations, now have human resources departments that have adopted critical race theory as their dominant functioning ideology, he said, adding that it’s become a particularly big problem at the federal level.

“You have an apparatus of federal power that has grown extraordinarily since the days of Woodrow Wilson through [Franklin Roosevelt] through [Lyndon Johnson] in this kind of permanently expanding power that until recently, at least theoretically, operated under the ostensible ideology of the social sciences, of neutrality, but it’s really been abandoned,” Rufo said.

The permanent bureaucracy, no matter who the president is, has adopted critical race theory as its ideology of choice.

Rufo spoke of potential ways to stop this form of regime change. He said that it’s important to create institutional infrastructure to protect people from being targeted and “canceled.”

Gonzalez said that it is essential to inform other Americans of the transformation taking place and warn them of the radical changes to come if these ideas are not stopped.

“The more we write about this, the more we expose people to what has taken place, to why, who did it, how they did it, and what is their real goal here, we can start to demolish this idea that ‘no, this is nice because people need … justice,’” Gonzalez said, adding: “Let’s really be honest, and without rancor in our heart, just expose them. Sunshine can be a great disinfectant. Let’s really allow in the light and expose this for what it is.”