What Royal Fashion Teaches About Compromise 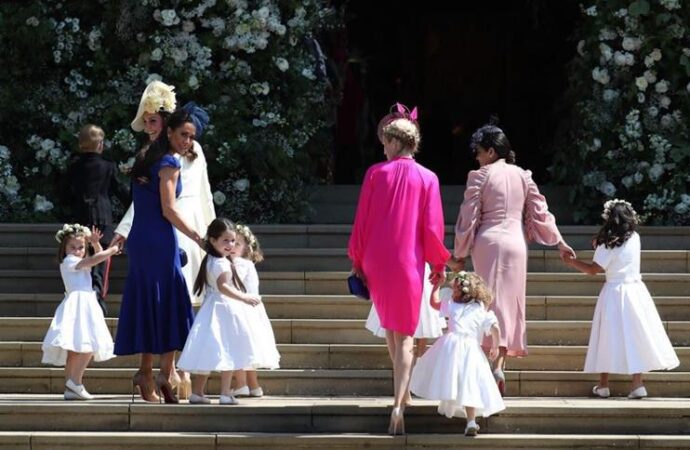 It all came down to hosiery.

While the world was preoccupied with COVID-19 and the protests sweeping America, a minor royal mystery was solved.

News outlets had long reported that a few days before her 2018 wedding to Britain’s Prince Harry, Meghan Markle made Kate Middleton, Duchess of Cambridge, cry over something. The spat took place during a bridesmaid dress fitting for Kate’s young daughter, Princess Charlotte, but its exact origins were unknown. Last month, Tatler magazine finally revealed the reason: Kate believed Charlotte should wear hosiery and Meghan disagreed.

Despite Kate’s tears, Meghan won the day. Photos from the wedding clearly show Princess Charlotte and the other little bridesmaids going barelegged.

The Duchess of Cambridge is joined by the Page Boys and Bridesmaids, including Prince George and Princess Charlotte #RoyalWedding

Hosiery – particularly sheer hosiery – occupies an unusual place in the fashion landscape. It is widely regarded as old-fashioned, but a small number of people and institutions still insist on it.

I asked a group of millennial women who are around Meghan’s age about sheer hosiery. They unanimously agreed that it is silly and pointless. However, one of them works at a conservative Christian college. She told me the dress code requires her to wear sheer hosiery if she is representing the school at a public event.

A recent feature in New York Magazine says sheer hosiery deserves a place in a woman’s wardrobe. It has some practical uses and can look attractive. But the magazine acknowledges that “outside of conservative law firms, an audience with the queen of England, or a southern debutante ball, the answer to the question ‘Are pantyhose necessary?’ is a resounding no.”

And that is the significant point in Meghan and Kate’s disagreement. Sheer hosiery is considered essential in the presence of the Queen. Royalty expert Victoria Arbiter told Insider, “You never see a royal without their nude stockings… I would say that’s really the only hard, steadfast rule in terms of what the Queen requires.”

Royal commentators have suggested Meghan’s refusal to put hosiery on her bridesmaids is an example of cultural differences. She is used to the modern American style. But perhaps there is more to it than that.

Less than two years after Meghan and Prince Harry married, they quit the royal family. They have now settled in Meghan’s native Los Angeles. Was this early dispute over hosiery a signal of what was to come?

If Meghan was unable to give in on a small issue that is universally acknowledged as royal protocol, then maybe she wasn’t willing to give in on anything. The hosiery in question wasn’t even intended for her own legs. Someone else would be wearing it.

The only time I have ever worn sheer hosiery has echoes of Meghan’s situation. I was a bridesmaid at a relative’s wedding and the bride’s mother asked me to wear it. So I did. I may not have seen the point, but I was happy to oblige because it seemed very important to her.

Getting along with other people involves compromise. We need to carefully examine what is truly important to us and where we can give a little. Sometimes we need to take a stand. But other times we don’t. Prince Harry and Meghan illustrate that a “my way or the highway” mentality leads to falling out and separation.

Kate wears hosiery when conducting public engagements. We have no idea how she feels about it personally, but she sticks to royal tradition. “She [Kate] is working hard to cement the monarchy’s relevance and morale-boosting powers during the Covid-19 crisis, and her insistence on tights is just an extension of that sense of duty – continuity being just as much about looking modest and respectful as being a reassuring, comfort presence in good times and bad,” writes The Telegraph.

By going along with a fairly minor point of protocol, Kate secured a stronger position for herself within the royal family. From there, she has been able to make a difference for the causes she believes in.

Ultimately, the dispute between Kate and Meghan was about a lot more than hosiery.