Shaun King and the ‘White Jesus’ That Undermines Racism 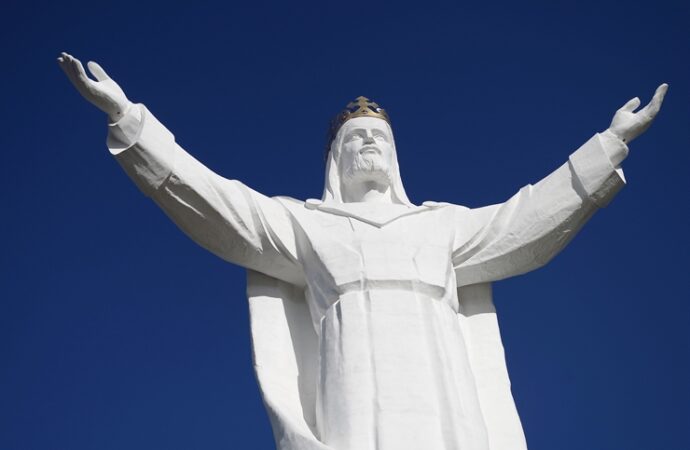 Let it never be said that Shaun King of Black Lives Matter has no influence. On June 22, King called for BLM protesters to desecrate all depictions of a European-looking Jesus, essentially inviting the wholescale vandalism of every Roman Catholic and Eastern Orthodox parish in the world. Within 24 hours, misguided activists half a world apart obeyed.

Black Lives Matter protesters vandalized and spray-painted the letters “BLM” on an image of Our Lady of Częstochowa, sometimes called the “Black Madonna,” which the Dutch city of Breda erected to celebrate its liberation from the Nazis. Meanwhile in the United States, police say a man painted swastikas over a cross and the graves of seven Dominican friars in Providence College’s cemetery. The suspect, 26-year-old Keveon Gomera, accused the institution – which was founded in Rhode Island in 1917 – of “being part of the slave plantations.”

The Black Madonna in Breda has been defaced and vandalised with the letters BLM.

The mosaic is dedicated to Polish soldiers of General Maczek who liberated the city in 1944 from the German Nazis.

We denounce this act of vandalism, which is offensive to Poles and Catholics.

Traditional Christian iconography and statuary deserve to be torn down, because it’s a “form of white supremacy” to portray Jesus as a “white European,” according to King – who has been criticized for looking too European himself (among other things). King further implied that Jesus must be dark-skinned, because He fled to Egypt, “[n]ot Denmark.” It seemingly did not occur to him that the Holy Family’s flight to Egypt may have been inspired by geographic proximity, the presence of a large Jewish diaspora community, and the need to fulfill multiple biblical prophecies.

While Christians of all backgrounds may instinctively know that it is sinful to destroy someone else’s property and an act of sacrilege to desecrate an image of Christ, they may share King’s animus toward Christian artwork – not all of which is misguided. Yet there is a deeper meaning to the colors and tones used in depictions of our Savior than 21st century critical race theory.

The principles that shape artistic renderings of Christ are intended to convey mystical, symbolic, and spiritual truths. This is driven home by the longest-running Christian artistic tradition: associating Jesus with the color gold, not white. Byzantine icons especially portray this.

“The Byzantines recognized that white is the absence of color and as such, was not the most fitting representation of the presence of the God who is everywhere present, filling all things,” Krista West, who tailors liturgical vestments, said. Instead, British scholar Margaret E. Kenna notes, “The color and the material … that most appropriately symbolize in an icon the presence and power of God, the uncreated and incorruptible light … is gold.” Western artwork’s use of the halo is a remnant of these gold-infused icons.

Gradually, the West embraced a more realistic form of religious artwork. As Sheila F. Winborne, a professor of religion and philosophy at Northwestern University, notes, the Byzantine icon’s “less realistically rendered style as well as the darker skin tones of Christ and the saints are meant to read as symbolic of Christ and the saints’ … ‘other-worldliness,’” whereas in the West, “the artists’ choice of the realistic rendering style originally was intended to symbolize the ‘real presence’ of Christ and the saints.” In time, realism “resulted in most viewers reading the art as void of symbolism.” Realistic artwork, viewed through King’s hermeneutic of suspicion, becomes one more channel for white supremacy.

Yet this criticism of Western religious art by King, et. al., underestimates Western artists’ genius and imagination. And at least one category of “white Jesus” should warm King’s heart as a message of racial inclusion.

The traditional icon of Christmas depicts all the aspects of the Gospel story: the manger, shepherds, angels, and the three wise men. The gift-bearing Magi are shown at different life stages: a young man without a beard, a middle-aged man with a full beard, and an elderly man with a white beard. This symbolically indicates that all ages and backgrounds will come to worship at the creche of Christ. As the age of exploration brought Europeans into closer contact with people of different ethnic backgrounds, Western Christian artists incorporated this paradigm by changing the ethnicity of two of the wise men. Medieval theologians saw the three Magi representing the descendants of Ham, Shem, and Jephthah; beginningin the 14th and 15th centuries some artists depicted two wise men alternately as an Asian Semite and a dark-skinned African.

That alteration pervaded the West’s supposedly realistic paintings with ahistorical universalism. The resultant symbolism proved truer than the most perfect photograph. This Western innovation reflected the words of Pope St. Gregory the Great that, through apostolic preaching, Jesus took “dark Ethiopic women” and “offered them up to the Father, as a glistening crown from the Ethiopians.”

Of course, if they held to intersectional theory, modern-day Persians could complain of their “erasure.” But those who obsess over the purported depiction of Jesus’ ethnicity miss the point entirely. Traditional Christianity has never been confused about the interracial nature of the Church, from the time that God proclaimed all creation “very good” to the day when “many shall come from the East and the West, and shall sit down … in the kingdom of Heaven” amid believers of “all nations, and tribes, and peoples, and tongues.”

“I depict Christ and His sufferings in churches, and houses, and public places, and images, on clothes, and store-houses, and in every available place, so that ever before me, I may bear them in lasting memory,” wrote St. Leontius of Neapolis. “I [venerate] the image of Christ, neither wood nor colouring for themselves.”

How we react depends on whether the guiding force in our life is divisive social teaching, or the unifying Gospel of the Son of God. We must choose wisely which to follow. Those, like King, who are impelled to advocate violent property destruction, show how estranged they are from the One depicted. No one may serve King and the Prince of Peace.