Reparations: Truly Helpful or a Quest for Power? 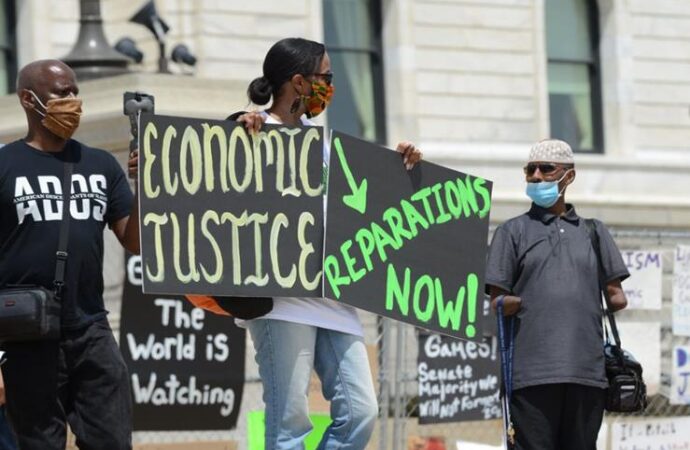 Today that reputation remains solidly intact. Asheville is the East Coast version of Portland, Oregon, a solidly Blue City where many of the residents are young, pierced, and tattooed, where tourists snap photos of dancers at the Friday Night Drum Circle like anthropologists on some exotic undiscovered island, and where virtue signaling is as common as the city’s potted roads. A popular bumper sticker in that city reads “Keep Asheville Weird,” which strikes some who live there as a redundancy.

From 2006 to 2016, I lived in what some have called “the Paris of the South.” Initially, I enjoyed my evening walks through the town, appreciated the proximity of my apartment to Trader Joe’s, Harris Teeter, and the public library, and took pleasure sitting on my apartment porch in the evenings watching the people who passed by.

After a while, however, I realized that “Keep Asheville Weird” made me the weirdo. I was the outsider, the guy dressed in khaki pants and a button-down shirt, the guy questioning the full-blown progressive viewpoints which predominated. I missed my loveable, Asheville apartment when I later moved north to Virginia, but had few regrets about leaving that city.

This week the city I once loved made history by advocating “reparations” for black citizens.

By a vote of 7-0, the Asheville City Council passed a resolution apologizing for the city’s historic role in slavery and in Jim Crowe segregation, voting to provide reparations to those affected – directly and indirectly – by such laws. These reparations come not in direct payments to individuals, but through various commissions that will, with the advice and counsel of certain leaders, funnel money, resources, and opportunity into the black community.

So let’s take a look at the Asheville City Council’s Resolution No. 20. It begins with some justifiable grievances. Blacks were slaves and, for a hundred years after the Civil War, were victims of segregation, at the hands, we should note, of Southern Democrats.

But then the list of grievances becomes more trivial. Are the black citizens of Asheville really suffering discrimination in the schools in 2020? Are qualified blacks, as the resolution states, refused permission to take Advanced Placement courses in high school? Have black people suffered from “the isolation of food deserts and childcare deserts?”

The grievances claim there is systemic racism in today’s Asheville. If so, what are some examples? And by the way, where do we find systemic racism anywhere in America in 2020?

When we carefully read Resolution No. 20, the vague language and the proposed solutions sound more like another government boondoggle than a real interest in the black community. The resolution creates various commissions and committees that will then issue reports and “recommendations that will make long significant progress toward repairing the damage caused by public and private systemic Racism.” Using these recommendations, the resolution then promises to increase minority home buying, investments in minority businesses, and other strategies “to grow equity and generational wealth.”

So now some questions.

Where will the money come from for such an ambitious project? This seems to be just another transfer of wealth program. Is that the final goal? The resolution avoids any discussion of the costs of such a program. Will the owners of the High Five Coffee Shop and the Battery Park Champagne Bar and Bookstore I once frequented be required to pony up even more of their earnings in taxes? Is that fair?

My Asheville neighbor’s grandfather immigrated to the United States from Italy in the early part of the 20th century. What did he have to do with slavery? Should my neighbor be required to make reparations? If so, why?

My Pennsylvania ancestors helped run the Underground Railroad. Two of them lost their lives fighting to free slaves in the Civil War. Were I still living in Asheville, why should I be required to pay higher taxes for reparations?

Another question regards who will serve on these committees looking for systemic racism. Will the committees be balanced, fair, and objective in the search? Or will they enter the hunt with their conclusions already in place?

Why involve the government at all? If Asheville’s City Council truly believes that inequality of opportunity exists and that investment needs to be made in the African American community, perhaps a more creative route is possible by seeking private businesses to undertake this task.

For thirty years, Asheville has prided itself on its “diversity.” It has a large LGBT population. It claims to welcome everyone, though I wouldn’t recommend wearing a MAGA hat anywhere near the Downtown. Taped to the front door of one virtue-signaling restaurant on Merrimon Avenue is a long list of categories of people welcome to dine there, which as a writer makes me smile. Why not just shorten that list to “Welcome Everyone?”

And now the city of bike paths, greenways, and hipsters gets to pat itself on the back once again.

So one last question: Is Resolution No. 20 really intended to help minorities or is it a political move by the progressive City Council to acquire more power?