Protest or Revolution? The Historical Crossroad at Which We Sit 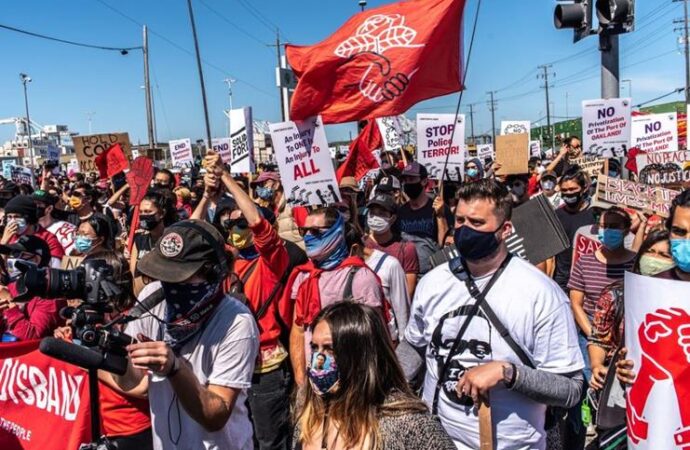 It appears that propaganda, not education, is officially the aim of America’s higher education institutions.

That seems to be the message in “315 College Deans Tell Applicants, Academics Unimportant, Protesting for Racial Justice Is.” Daniel Greenfield shares with readers the news that college deans from across the country have issued a joint statement regarding the coronavirus and its effects on campuses, reminding students “to be gentle with themselves” and that “we will assess your academic achievements in the context of these obstacles.”

Later in the document, the deans assert “We also value forms of contribution that are unrelated to this pandemic, such as working to register voters, protect the environment, combat racial injustice and inequities or stop online harassment among peers.”

These folks are like the Energizer Bunny. They never quit.

Ever since the French overthrew their king in 1789, liberalism has paved the way to most of the world’s revolutions. Once the revolution commences, the tough guys – men like Lenin, Stalin, Mao, and Hitler – take control, kill or imprison the intellectuals, and commence their bloody trek toward the New Utopia.

So, in 2020 are we seeing protests against injustice, or an attempted revolution?

Groups like Antifa and Black Lives Matter have called for the radical transformation of the United States. They are behind much of the present rioting and disorder in our cities, manipulating idealistic young people, calling on officials to “defund the police” as a ploy to spread this chaos, while making ridiculous demands and leveling absurd charges of injustice.

In lockstep with them are some major corporations, many politicians, sports figures, and celebrities, all giving vocal support, and in many cases, millions of dollars to the cause. Here that unattributed adage of communism applies very well: “The capitalists will sell us the rope with which we will hang them.” In this case, the capitalists are actually funding the purchase of that rope as well.

Many in the mainstream media either echo these groups’ talking points or actively support them. Graduates from the colleges mentioned above now fill our newsrooms, true believers in their own propaganda, malcontents less interested in facts and fairness than in promoting a cause.

We see evidence of this revolution in the widespread destruction of statues and the changing of school and street names. This iconoclasm is an attempt to erase our history and create a blank slate from which to build a new world order. This same erasure has already taken place in many of our history and social science textbooks.

Another sign of our dangerous times is the surge in gun sales, sparked first by COVID-19 and now by the violence in our streets. Many people sense that the police and the government are no longer willing or able to defend them or their property.

Attacking the police is another ploy of these radicals. By weakening the police, by undermining their funding and their morale, they hope to make America’s streets and neighborhoods their own.

In light of this turmoil, we should ask ourselves: Who’s behind this mess? Are the riots in our cities locally inspired, or are there directors behind the scenes, agents unknown to us intent on damaging the United States as much as possible? Is China or Russia involved in whipping up this hysteria? Is there some as of yet unknown group trying to destroy our country?

I’m too ignorant to answer such questions. But like many of you reading my words, I do believe we have traveled far beyond protesting the death of George Floyd. We may have reached a crossroads in our country’s history, a place where decency and patriotism are in a no-holds-barred war with deceit and socialism.

The Fourth of July, our Independence Day, is upon us. I’ve mentioned to several people I expect some catastrophic events on this day. I fervently hope I am wrong. Regardless of what happens, is not Independence Day the perfect time to pause and pray for our liberty and for our country?