Rebels Without a Logical Clue 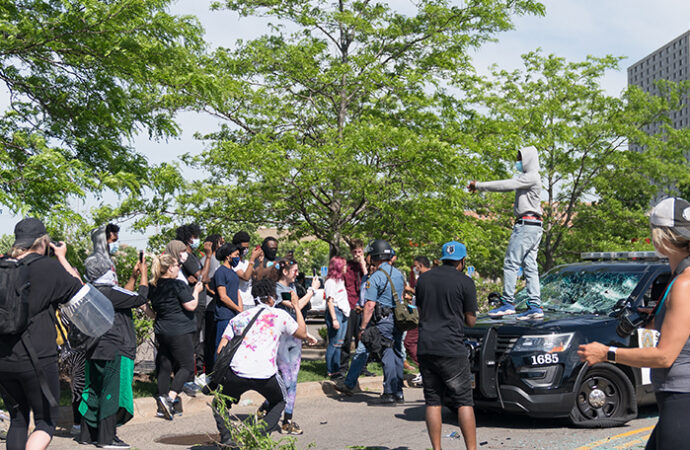 During the weekend riots and protests in Minneapolis, I saw a news reporter stop a young protester on the street and ask him why he was protesting. “Stop, don’t shoot,” he said.

The reporter, wanting something more than this, asked him again, trying to make clear that he was asking for the actual reason the young man was there. “Black lives matter,” he responded. The reporter made a couple of more attempts to get a rational answer, but all the young protester could do was repeat slogans.

You can’t even have a respectable protest with protesters like this. We have raised a whole generation of people who think in slogans and act on impulses.

I wonder if it is this that is fueling the riots in many of America’s major cities. What started as anger over the brutal death of a seemingly innocent man was picked up and spun out of control by people chanting and burning and looting who don’t seem to have a clear rationale for their actions.

A remarkable thing about the protests is that so many of them have a very white, middle class look. In fact, far from being black and ethnically homogeneous, there seemed to be as many whites as there were blacks. They congregated on the streets not really seeming to know why, other than some vague sense that there is some higher purpose to their actions: that there is George Floyd and Black Lives Matter and Stop Don’t Shoot, all of which do have something to do with injustice. The problem is, they can’t exactly say why, nor can they say what would satisfy them.

At least the protesters of 1960’s were able to muster some mildly coherent rationale for what they were doing, and there was very little commercial looting. They didn’t steal bras in the 60’s. They burned them.

What seems to be increasingly clear is that these riots and protests are not about George Floyd, they’re about boredom. They’re about ennui. They’re about the fact that we have raised at least one generation, maybe two, whom no one has bothered to teach the power of reason or analysis and so they are completely at the mercy of their feelings. These feelings turn into excited fashions and fads, particularly political fashions and fads bearing high-minded labels.

Some of it is simply that. In the midst of their increasingly abstract lives, lives immersed in technology and virtual reality, for once something real seems to be happening, and they want to be there to get it on Instagram. Notice the number of phones with cameras pointed at the action. Here is something worth taking your earbuds out for.

Here we have a bunch of people with way too little to do and way too much time on their hands looking for a little existential self-authentication. They’re doing it for the same reason that Albert Camus’ Meursault shoots the Arab on the beach in The Stranger: because he could.

With completely ineffective law enforcement and timid leadership, the protesters even have to try to get arrested. Even then, it usually doesn’t work out. Today’s riots are broadcast on Facebook and have the feel (and practical danger) of just another lifestyle app. Protests are now the cultural equivalent of a fashion accessory.