Protester Privilege and Its Corresponding Kingmakers 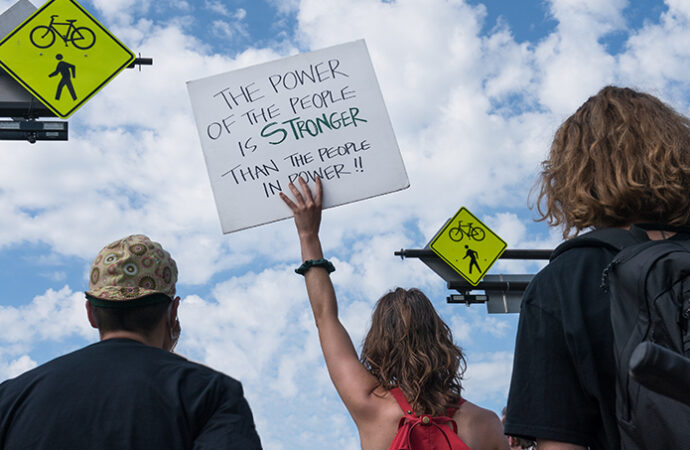 New York City Mayor Bill de Blasio’s army of COVID-19 contact tracers will not be asking New Yorkers if they attended a protest in recent weeks according to a city officials.

“No person will be asked proactively if they attended a protest,” de Blasio spokesperson Avery Cohen told THE CITY.

The 1,000 strong “Test and Trace Corps” will, however, continue to ask “Do you live with anyone in your home?” The Corps will also ask about all of your “close contacts,” i.e. anyone you’ve been within six feet of for at least 10 minutes.

How this would not include anyone you’ve been next to at a march, die-in, rally, or other protest action is unclear, but then it seems there’s a lot of uncertainty going around for de Blasio and New York Governor Andrew Cuomo. The mental gymnastics they are doing would make anyone’s head spin.

“Please get that test. That’s the one variable in this equation that we’re not sure of. We don’t know what the effect of those protests are,” Cuomo said last week of COVID-19’s spread.

The same politicians who have spent months insisting that religious gatherings must be forbidden and millions of people’s ability to earn a living must be suppressed even “if it saves just one life” are now bending over backwards to accommodate mass gatherings far in excess of what an ordinary church service or business setting would accomplish.

“If you were at a protest, I understand your point, I’m with you. We also have this situation with the coronavirus. Act responsibly, get a test. Get a test,” Cuomo said last week.

Where was this trust for the pastors who wanted to reopen their churches and tend to the spiritual needs of their flocks? Where was this understanding for the millions of people left unemployed by government-mandated shutdowns of the economy? Surely churches and restaurants are better able to enforce social distancing and sanitation guidelines than any protest could.

Cuomo knows very well what an aid the protests could be in spreading COVID-19, he’s just choosing to ignore it. Cases will likely increase, along with deaths, creating a very convenient excuse for power-loving politicians to prolong the economic and social shutdowns of the lives of ordinary Americans, many of whom had nothing to do with the protests in the first place, and who have actually been living up to the trust and understanding that Cuomo so graciously extends to his favored group of dissenters.

George Floyd’s death was a tragedy and it’s right and good for people to engage in peaceful protests demanding the government change its policies and practices. However, the current practice of allowing for one type of protest in the midst of a public health crisis while demonizing other protests is an exercise in tyranny.

As individuals, Cuomo and de Blasio are perfectly entitled to value the cause and people of Black Lives Matter over the people who have lost their livelihoods to the COVID-19 shutdowns. The problem arises, as Frank Meyer explained in his essay, “Collectivism Rebaptized,” when these men in power attempt to enforce their views upon others:

“[A] belief in the unique value of each individual person, [is] a belief which is the first principle of any philosophy of freedom….

“But it is only the first principle. However deeply it is held, it is not by itself sufficient to guarantee the freedom of men in society. Too many interpretations are possible as to what the ‘integrity of the individual person’ consists of. And, given the persuasiveness of one of these interpretations, men will always be found who, if they possess the power, will attempt to enforce their interpretation on other men.”

This form of selective tyranny is perhaps worse than a general tyranny, for it pits groups of the citizenry against each other. Why are the individuals in the Black Lives Matter protest more worthy of freedom and the trust of the government than those who simply want to end the lockdown and get on with their lives?

In putting trust in certain groups while demonizing and oppressing others, Cuomo and de Blasio have used the power of government to create disparities by attempting to enforce their definitions of integrity. Hence they extend privileges to one class, while others are demonized for asking for equitable treatment by their government. In this way, politicians may even deflect criticism of themselves, as these new classes of citizens engage each other instead.

It remains to be seen how long such government-created discrimination will be tolerated by the American people. We may yet see a much quicker end to the American public’s acceptance of COVID-19 shutdowns as a result of this new set of standards.