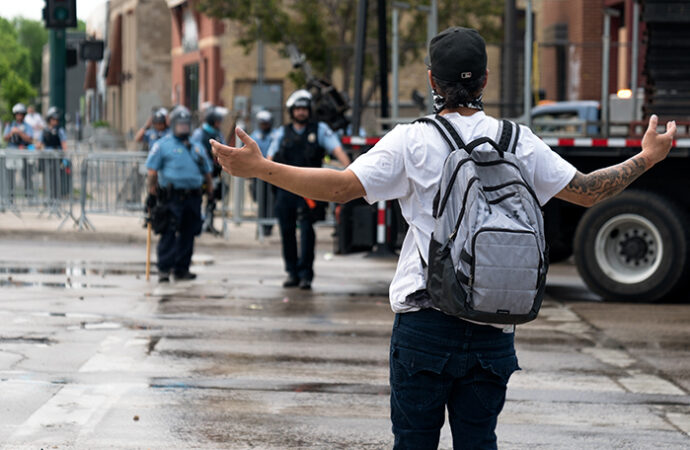 Later, the young man was stopped by a police officer driving on Interstate 40 in northern Arizona. The cop told him he was “the most suspicious person he had ever” seen in his life, and searched the rear of his car, messing up his possessions, before letting him go because the car contained no drugs or contraband.

Many years later, the same man, nearing age 50, was waiting to pick up his wife and daughter in the cell phone parking lot near Dulles Airport. A policeman came and shined a flashlight into his car, ordered him out of the car, and told the man how “suspicious” he was.

This all seems terribly racist. A sign of the unrelenting suspicion and racial stereotyping that follows black men all their lives.

But actually it wasn’t. You see, the young man described above was me, and I experienced all these things, despite being 100 percent white.

If I were black, I would probably suspect these things occurred due to my race. And in fairness, there is racial bias in police stops, to a certain extent. Prominent black people like Senator Tim Scott and the Wall Street Journal’s Jason Riley have been stopped more often by police than a similarly-situated white person would. In many cases, police are reacting – or, to be more accurate, overreacting – to the higher black crime rate, by stopping motorists at a higher rate than whites, and not just a somewhat higher rate, but at a rate so much higher that a given black motorist stopped by the police is actually less likely to have drugs or contraband than a similarly-situated white person, and less likely to have committed a traffic infraction. This is born out by recent research showing statistically-significant racial bias in police stops.

However, most interactions with the police occur without regard to race. In 1994, federal government statistician Patrick A. Langan studied the nation’s 75 largest counties and found “no evidence that, in the places where blacks in the United States have most of their contacts with the justice system, that system treats them more harshly than whites.” A study by the black Harvard economist Roland Fryer recently found that police killings are not primarily due to racism, and racism does not play a significant role in police shootings nationally.

It is simply not true that racism is everywhere in the criminal justice system, or even that all state criminal justice systems manifest racism to any statistically significant extent in sentencing. For example, researchers at place like the RAND Corporation looked at California’s state criminal justice system and, controlling for relevant variables, found that criminal sentencing in California was racially fair and non-discriminatory, overall, and that blacks and whites in California who are similarly-situated got very similar sentences. (See, e.g., Stephen P. Klein, et al., “Race and Imprisonment Decisions in California,” 247 Science 812 (1990)). Similarly, a 1991 RAND Corporation study of adult robbery and burglary defendants in 14 large U.S. cities found that a defendant’s race or ethnic group bore almost no relation to conviction rates, sentencing severity, or other key measures.

The fact that African-Americans are convicted and incarcerated at a higher rate than whites is primarily due to the higher black crime rate, and victim reporting of such crimes when they occur, not police racism. The FBI’s Uniform Crime Reports show that 47 percent of murderers in 2018 were black, even though blacks make up only 13 percent of the U.S. population. Similarly, 43.7 percent of all rapists in state prisons were black, according to a 1997 report by the Bureau of Justice Statistics.

Higher black arrest and incarceration rates are falsely depicted as the “New Jim Crow”, by people who seek to reduce sentences for violent crimes. That gets history exactly backwards. Short sentences for crimes committed by blacks against blacks were the norm under Jim Crow, and reformers once sought to end that. A young black lawyer in Missouri, Theodore McMillian, successfully fought to end the evil local practice of letting blacks who kill other blacks serve just a year in jail. He later became the first African American to serve on the Missouri Court of Appeals, and the first African American to serve on the U.S. Court of Appeals for the Eighth Circuit. Once upon a time, giving blacks who kill blacks short sentences was understood as the “soft bigotry of low expectations.”

But now, progressives want to cut sentences for murderers, especially black murderers, whose victims overwhelmingly are other black people. Many progressives – such as German Lopez at Vox – are now advocating a 20-year cap on prison sentences for even the worst crimes. So a murderer who spends an entire evening slowly beating a tied-up family to death, as the parents watch the torture and death of their own children, couldn’t get more than 20 years in prison. (That’s not a hypothetical. That is what a murderer did to a black family of five in Detroit, Michigan. You probably didn’t hear about those murders, because it was black-on-black, so it mattered less to the media, which focuses more on crimes committed by whites against blacks).

Other progressives want to go further, and defund the police, such as Hillary Clinton’s former national press secretary, and city council members in New York, Los Angeles, Seattle, and Minneapolis. They want to do this, even though this would harm minority neighborhoods most.

It is unfortunate that racial bias in police stops exists. But racism is far less present in other facets of the criminal justice system, which require more evidence for police action. A police stop can be based on mere “reasonable suspicion,” essentially just a hunch. The mere hunches that lead to a police stop can sometimes be influenced by subconscious racial bias. By contrast, arrests are based on more evidence – “probable cause” – and are usually made in response to a complaint by a victim of the same race as the perpetrator, which rules out racism as a cause. Criminal sentencing is based on concrete evidence specific to the individual perpetrator, such as proof of guilt beyond a reasonable doubt, not vague “hunches” influenced by racism. Thus, most criminal sentencing, and most arrests, are untainted by racism.