Modern Plagues and the Prescience of Ray Bradbury 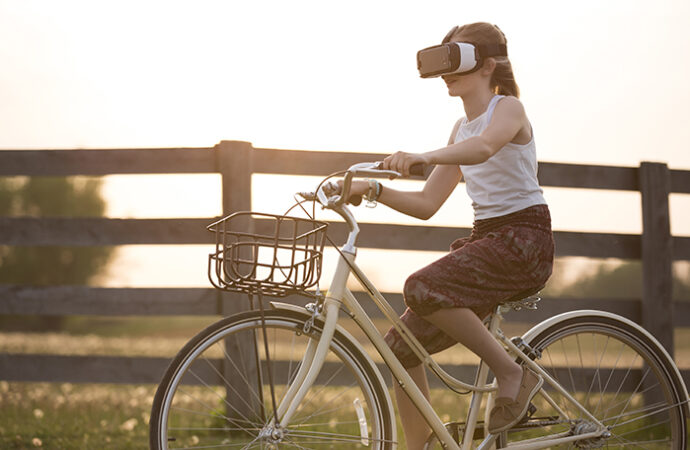 I am haunted by a lonely man.

At sundown every day, he walked the neighborhood sidewalks, glancing at lives through windows. “Was that a murmur of laughter from within a moon-white house?” he asked as he passed the homes of his neighbors. He could not see people or their faces, just the glare of light from TV screens. The houses were tomb-like. Then one day a police car found him on this unkempt sidewalk and he disappeared.

Little did Ray Bradbury know of his prescience in 1951. True to the nature of science fiction, Bradbury’s The Pedestrian (and his one-act play by the same name) criticizes society’s obsession with screens and the far-ranging effects of technology. Could television supersede community? Could it control us to the point of isolation and loneliness? Have cities become places where taking a simple walk is greeted with suspicion? Our answers in pandemia might differ from what Bradbury anticipated.

Yet those same questions echo in Bradbury’s other work too. In Fahrenheit 451 (1953), Guy Montag’s wife Mildred is wholly addicted to her three wall screens and Seashell ear radios. She not only refers to the TV characters as her family, but also ignores Montag, her real family. Vacuous to the end, Mildred is incapable of emotion, even dismissing her suicide attempt. She has chosen technology, and it was faithful to groom her obsession.

In a darker vein, the power of these screens is similar to the hold the crystal walls have in The Veldt (1950). In their Happylife Home, Lydia believes something is wrong with the crystal walls in their children’s nursery. Her husband George, though, is “filled with admiration for the mechanical genius who had conceived this room . . . Oh, occasionally they frightened you with their clinical accuracy, they startled you, gave you a twinge, but most of the time what fun for everyone, not only your own son and daughter, but for yourself when you felt like a quick jaunt to a foreign land.”

But the psychologist says that the house has replaced the parents and their affections. The children are more than addicted and act out. By story’s end, George asks, “What prompted us to buy a nightmare?” His wife replies, “Pride, money, foolishness.” I won’t spoil the story for you if you haven’t read it, but it provokes us to gawk, yes gawk, at the danger of technology.

In the world of pandemia in 2020, Bradbury’s stories resonate with a different irony. For those who can afford the technology, screen life has become more critical than ever, critical to education, business, government, and ministry. It has become a way of connecting, a method of community. It keeps us close, yet as Bradbury thought, isolated from our neighbors and family. But that’s the nature of the current virus, a destroyer of community. Bradbury did not predict a plague-inspired isolation, at least not this type of plague.

Instead I think he saw technology as the plague that isolates, a relentless social force. He would ask us, “What are we dependent on? What can we not live without?” As if Bradbury was thinking aloud, he offers several “solutions.” We could destroy technology, especially if we realize it controls us too much. In The Murderer (1953) Albert Brock is arrested for shooting a television set, murdering a telephone, a wall radio, a wrist radio, intercom system, and other things. Brock is happily committed to an institution for six months in a quiet cell. This is the stance of a rebel, not a conformist.

In The Last Night of the World (1951), Bradbury doesn’t have to mention technology as the planes fly in. We don’t destroy technology, but the technology-infected world might destroy us. And if technology infected us, who is at fault? We listen in as the everyman husband and wife converse after putting their girls to bed.

“Where’s that spirit of self-preservation the scientists talk about so much?”

“I don’t know. You don’t get too excited when you feel things are logical. This is logical. Nothing else but this could have happened from the way we’ve lived.”

“No, nor enormously good. I suppose that’s the trouble. We haven’t been very much of anything except us, while a big part of the world was busy being lots of quite awful things.”

Bradbury’s generalism gives us much to think about. What part do we play in the rest of the big world? Does technology always lead to mass destruction? Can its effects be countered or balanced?

An antidote lies within Bradbury’s criticism. I think he’s calling us to wake up.

We are hopefully living in a time that allows us to see what we don’t have, even if it forces us to rely on technology more. In The Life of the Mind, Fr. James V. Schall insists that we can grasp the very realization of not knowing [which] can exhilarate us. In The Pedestrian, for example, Mead might be alone, isolated in a different way, but he still moves and lives and breathes and sees, cognizant of the technology he doesn’t need and aware of the good in the life he has – at least until he’s taken away. For the decade he spent as a firefighter, battling books and the independence they stood for, Guy Montag fully sees what was denied him. Schall, too, describes this – We become luminous to ourselves only when we know what is not ourselves. It is the idea that as we are exposed to things outside of our daily life, the things we are not, that we do become more aware of who we truly are.