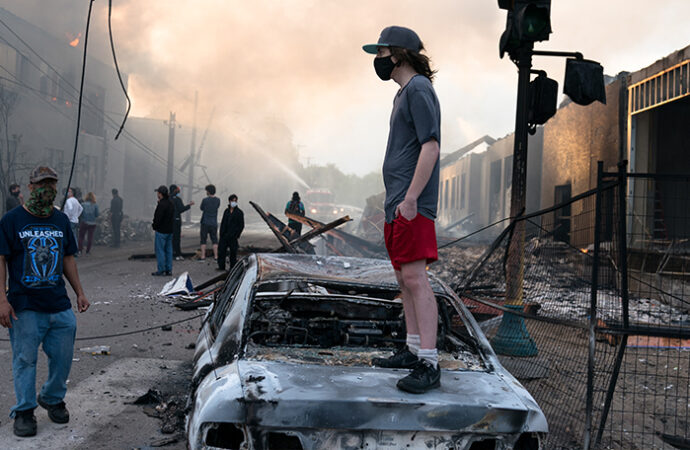 In Minneapolis last week, the death of an unarmed black man, George Floyd, in police custody led to days of rioting and looting in Minneapolis and in cities across the nation. Many are saying that this incident is one more sign of American racism. Others have declared the riots are justified, the natural and spontaneous reaction caused by pent-up frustration in communities long ignored or oppressed.

But are these assertions correct?

As far as we know, none of the officers involved in the death of George Floyd uttered a racist comment. While they may have been prejudiced, we can’t read their minds. All we know for certain is that they brutally took down and killed a man attempting to pass counterfeit money at a store.

Derek Chauvin, 44, the officer who pressed his knee against George Floyd’s neck until he stopped breathing, had served with the Minneapolis Police Department for 19 years. During that time he had 17 complaints filed against him, two of which brought official reprimands, and was involved in three shootings, one of them fatal. He also worked as a security guard in a Latin nightclub, where the owner had to warn him to tone down his aggressive use of force when dealing with unruly customers.

One of the other police officers, Tou Thao, was charged with excessive use of force in 2017, and was found guilty and fined.

Did George Floyd die as a consequence of racism? No idea.

Did he die as a consequence of inexcusable and horrific police brutality? Absolutely.

Peaceful protestors are rightly demanding justice for Floyd and for reforms in the police department. Anyone who has seen the video of Floyd’s death would stand alongside them.

Others who claim to be outraged by Floyd’s death have taken to rioting and mayhem, burning cars and stores, stealing liquor, cash, and other goods, and issuing various death threats to anyone they regard as an enemy. White and black, masked because of the coronavirus, these modern-day barbarians, some of them from places other than Minneapolis, have destroyed property worth millions of dollars. Their sideline cheerleaders, various politicians and some in the media, contend that this violence and mayhem is a consequence of pent-up frustrations with the system.

I have a hard time buying that.

Many blacks who live in Minneapolis also find it difficult to see how the riots are helping them. After all, their stores and places of employment have suffered at the hands of the scum who burned and looted the city. Even representatives of Floyd’s family have pleaded for peace, arguing that “looting and violence distract from strength of our collective voice.”

Meanwhile, for days both the governor of Minnesota and the mayor of Minneapolis responded to these riots in so feeble and bizarre a manner that they sometimes seemed in cahoots with the vandals. Mayor Jacob Frey even ordered the distribution of facemasks to the rioters to protect them from coronavirus. By then, we can assume that social distancing directives about no more than 10 people were out the window.

After the fourth night of rioting, Minnesota Governor Tim Walz summoned all the state’s National Guard, stating the riots are “a mockery of pretending that this is about George Floyd’s death, or inequities, or historical traumas to our communities of color” and accusing white supremacists and drug cartels of organizing this nightmare.

Other observers point to ties between the rioters and Antifa, the “antifascist” collection of socialists, anarchists, and whack jobs who pretend to promote peace even as they practice the tactics of intimidation and the destruction of property. There may even be some links with Antifa and those in Minnesota’s government: a photograph on Twitter shows the Minnesota’s Attorney General Keith Ellison proudly holding a copy of Antifa’s handbook. Meanwhile, Jeremiah Ellison, his son and a member of the Minneapolis city council, tweeted “I hereby declare, officially, my support for ANTIFA.”

Meanwhile, other cities across our country are burning and under attack.

Here are some points we might take away from this awful mess.

First, we must continually work to reform police practices. Many of these public servants are worthy men and women who rightly regard themselves as defenders of society. We can’t always prevent a man like Derek Chauvin from joining their ranks, but we can ask why an officer of the law who continually finds himself in hot water for overreacting to a situation is still in uniform. Was it the union that prevented him from being fired?

Next, the federal government should investigate Antifa on the grounds it is a domestic terrorist organization. Did the accelerants and firebombs used to burn buildings just appear out of thin air? It’s also hard to believe the 100-brick pallets conveniently on hand for rioters in Dallas just happened to be sitting there.

Finally, mayors and governors should learn a lesson from riots past. Those who participate are committing crimes of theft, arson, and general endangerment to the public welfare. To allow them to keep burning and looting in the hopes that they will eventually wear themselves out is foolish. To try to persuade them by words to stop this destruction is beyond foolish.

These people are criminals. Next time, crack down fast and hard, and end the madness.