Black Looting Victim: Our Business ‘Is Our Ministry’ 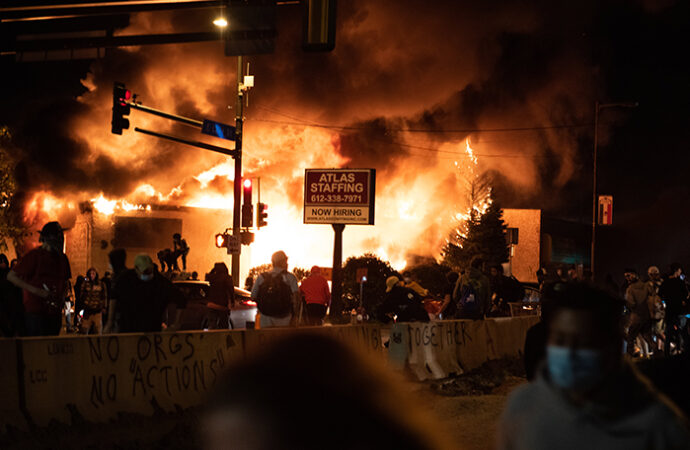 “We’re here for God. This is our ministry. This is our family legacy,” said Janice Wilbourn as she surveyed the ruins of Sisters Designs, an Atlanta dress shop she co-owns with her sibling. “This is devastating.”

“It’s very hard to see your whole life savings go down like this,” said Ricardo Hernandez, who owns the La Michoacana Purepecha ice cream shop in Minneapolis. “We used up all our money to build something nice for … not just the Latino community, but everybody.” Ben Diallo, an immigrant from Guinea who lives in Indianapolis, referred to his ransacked clothing store as “my baby.”

“Small, minority business owners found themselves with the businesses that they worked their fingers to the bone building destroyed, looted, vandalized and burned down,” wrote Maya Santamaria, an Hispanic entrepreneur whose building was torched by rioters, on a GoFundMe page. “Some had no insurance. Others have no resources.”

In some areas, owners found themselves reliving past traumas. Rioters burned and battered Jet Beauty Supply, a minority-owned business – just as they did during Milwaukee’s Sherman Park riots in 2016. Kayla Levine, whose family has owned a Massachusetts liquor store since the 1940s, said the looters’ path of destruction reminded her of the Boston Marathon bombings.

The minor appliances that looters make off with – a TV here, an iPad there, liquor rather ubiquitously – won’t change the thieves’ lives, but they cause the store owners’ dreams to slowly bleed out. In Minneapolis, black fireman Korboi Balla plowed his life’s savings into a bar he hoped to open in March. The COVID-19 lockdowns postponed the big day until June 1. The riots leave his life’s work under a cloud – in part because looters buy into the envy-laced rhetoric of class warfare.

“I’m hearing people say F— the business they have insurance,” his wife, Twyana, wrote on Facebook. “WELL WE DON’T AND THIS IS ALL OUT OF POCKET.” (Emphasis in original.)

Dan Buxton shared that sentiment after he saw his Play It Again Sports shop in La Mesa, California, looted last weekend. “I put everything I had earned into this place; basically my whole life savings into this business,” he said. But rioters saw it as nothing more than another store ripe for plunder:

“They see me as a business, but I’m not a business. I’m a person. I have a family,” Buxton said. “I just want everyone to stop thinking of people as groups: police, businesses, protesters. Each one of them is an individual.”

The riots left business owners almost too discouraged to rebuild. “Being a minority, we are working so hard. We want to make it through this and after COVID. So yesterday morning I was hoping to just clean up and open, but I couldn’t because I was so sad. I couldn’t stop crying,” said Saki Melius, the owner of the Menya Ramen & Poke restaurant in Denver. “Today I’m alone because my employees are afraid to come in.” Zach Monks, a white business owner in Denver, said seeing his shoe store looted three times in two days left him feeling “broken, almost.”

The predators’ theft and mindless damage “pushes those businesses back even further, especially those that were small business owners,” said Leona Barr-Davenport, president of the Atlanta Business League.

But the ill effects of the mob’s smash-and-grab strategy are far from confined to shop owners. They radiate outward – and downward – to all of society.

In some cases, rioters are throwing minorities out of work. Jim Ilg said he “had to lay people off” after his 11th Avenue Hostel in Denver sustained $20,000 in damages. “$20,000—that would be a part-time worker’s wages for an entire year that was just destroyed in literally seconds. So they’re taking jobs away from people by destroying this.”

The damage of looting truly does trickle down.

Looting similarly harms customers. Sometimes customers realize how businesses become a part of our lives – like the Columbus man who started a GoFundMe page for the shop where he bought the suit he wore at his wedding.

Riots create unseen victims, because the stores that are looted are no longer available to supply people’s deepest needs. An African-American woman in Minneapolis gave their suffering a face.

She tearfully recounted how she watched helplessly as rioters “went straight to Office Max, and Dollar Store, and every store over here that I go to. I have nowhere to go now. I have no way to get there, because the buses aren’t running. … These people are tearing up our livelihood.”

Her cries were head by ministers of the Gospel, who tried to calm passions and remind the unthinking mob of moral truths. In Minneapolis, “[o]utside the 3rd Precinct police station, a crowd gathered around preachers from New Salem Baptist Church, who stood between protesters and a formation of police officers carrying long guns and marking rounds, urging a return to peace,” reported City Pages. Marlon Moore “argued with protesters trying to justify looting as protest against capitalism,” telling them:

We lost a lot last night. We lost resources. Somebody is suffering right now in silence because she can’t get to the store and she lives five blocks from here. Somebody’s kid doesn’t have diapers and milk because somebody decided to take them home with them last night.

Someone no longer has a business, a “ministry,” a “family legacy,” because of rioting.

The “property damage” the Left so easily dismisses tears deeper, and more painfully, than most people can see. It compounds the injustice of the original crime by punishing the innocent. And it tears down the edifice of our public trust, one brick at a time.