We Were Never Asked to Approve the Shutdown 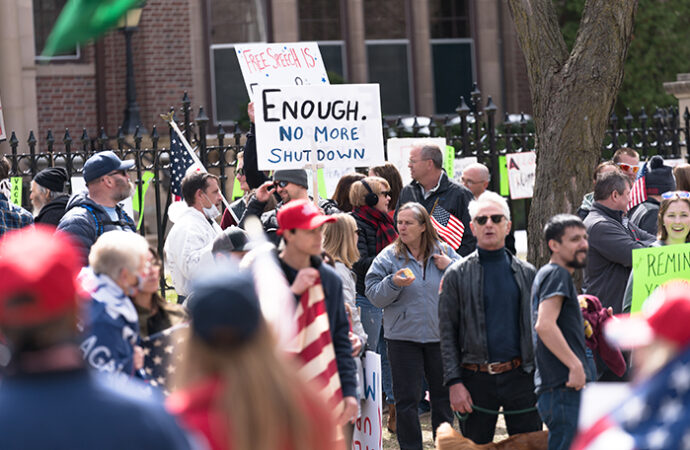 Police officers dealing with the public have a fairly savvy approach to persuasion: first ask, then tell, then force. It works because it accounts for the dignity and self-respect of others. Uncertain rookie cops and bullies are the ones who forget to ask, adding unnecessary friction to encounters between citizens and the state.

In the early days of the coronavirus, everyone went from being carefree and complacent to scared in the blink of an eye. We did not know what we were facing, other nations were taking extreme measures, and apocalyptic predictions from scientists and public health officials created an overnight panic.

Quite voluntarily, most people avoided crowds, unnecessary trips to the store, going to the office, and anything that might increase their risk of catching the coronavirus. Handshakes went out of style, as did restaurants, gyms, and travel. Soon there was a run on surgical masks, which became so bad that authorities engaged in a “noble lie” to discourage their use by regular folks. Now these same experts have reversed course, as if we will forget what they said only a month ago.

We Were Sold a Temporary Lockdown

In addition to these voluntary measures, mandatory lockdown measures were imposed to “flatten the curve.” They were supposed to save our hospitals and preserve limited ventilator resources. While severe, this mostly made sense, as the risk seemed enormous, and the lockdowns were sold as a temporary measure.

As soon as the “15 days to slow the spread” began to expire, however, the goalposts were moved. New reasons to keep them in place were proffered, including inadequate testing and the fact that the virus was so widespread.

After two months with little human contact, tens of millions of lost jobs, and far fewer hospitalizations and deaths from the coronavirus than the experts predicted, many have concluded that these lockdown measures were a mistake. Even if they were once justifiable based on limited information, more and more people are convinced that continuing these measures any longer will be worse than the risks from the disease itself.

The Natives are Restless

Even as some states have started to open, leaders in mostly blue states and urban areas have held fast. These new measures border on the sadistic.

Mandatory mask orders have appeared in many locales. In Los Angeles, which has been only moderately affected by the coronavirus, the lockdown has extended through the end of July. Illinois’ governor, J.B. Pritzker, decreed that only two passengers would be permitted on recreational boats, regardless of size and whether everyone aboard lives in the same household. Michigan’s Democratic governor, Gretchen Whitmer, said her state’s harsh and ongoing restrictions were based “on the best science, the best facts.”

Skepticism and annoyance are now bubbling into anger and active resistance. Protesters in Michigan have taken to carrying guns and making vague threats against their governor, who has taken a particularly hard line against all normal human activity.

In Fresno, California, demonstrators actively confronted the mayor and a city councilman at their homes. In Dallas, the authorities tried to make an example of a hairdresser who reopened her salon. Far from acting “selfish,” she explained how her employees needed to make a living and were suffering.

As it has with the issue of global warming, the “science vs. skeptic” debate has become partisan. About half the country, maybe more, simply do not trust the experts. They don’t trust them on the facts, not least because they are consistently proven wrong by events, but they also don’t trust their motives or concern for the people they are hurting. The common people especially resent how, instead of persuasion, the experts are so quick to reach for the mandate.

Last year, through an excellent HBO miniseries, the Soviet Union’s 1986 Chernobyl disaster came to life. Lies about risk were widespread. People were told for years that science proved the reactors were safe, only to be dragged from their radiation-contaminated homes with only the clothes on their back. Certain observers, particularly on the Right, saw the series as a lesson in the evils of communism. While it was indeed that, things also looked rather familiar.

Like our country today, the Soviet Union was full of hard-working and patriotic little people, whose lives and fates were controlled by authorities more concerned with saving face than doing the right thing. As the series dramatized, individualized justice and truth were often suppressed in the name of ideology and scientific progress. Rank and title counted for a lot, while common sense was often neglected. The Soviet Union was a Communist regime, but it was chiefly a bureaucratic regime, where the bureaucracy’s managerial class had privileged lives and a hostile relationship to the common people.

The United States has long been a more individualistic, entrepreneurial, and freedom-loving people than those in Europe, whether East or West. Our national life is much more than an abstract creed. Our culture can be found as much in the Federalist Papers as in the advent of the road trip, music festivals, and, in the days of Prohibition, the speak-easy. We are a restless, energetic, and unbridled people. We are wont to question authority and bend rules that seem stupid and meddlesome.

Public health has always had an uneasy relationship with that culture. At its worst, public health expresses a censorious, cautious, and schoolmarm instinct. It is the force behind book-length warnings on the side of lawnmowers, the demise of dodgeball, and Prohibition itself. If it is an American impulse, it’s the dark side of America; the perversion of our “can do” spirit into relentless crusades against fun in the name of safety and science.

We all have our own priorities, weigh risks and benefits differently, and, until recently, we were allowed to decide these things for ourselves. The public health ideologue does not agree that risks of various kinds – including the voluntary risks of smoking, drinking alcohol, or driving motorcycles – are things that a free people should be allowed to do.

People Can Assess Risk for Themselves

The lockdown crowd will invoke a countervailing principle: even people who believe in freedom will concede that you do not have the right to endanger others.

In the abstract, this is true. But is anyone endangering others if they fail to abide by these lockdowns? Setting aside the modest coronavirus risk for the vast majority of people, we have been told that social distancing is the means of safety. If you avoid others, wash your hands, and wear a mask, you will be safe.

If avoiding others, wearing masks, and social distancing are so effective, then – like refraining from smoking or skydiving – the people who feel strongly about risk have the means of protecting themselves. Perhaps vulnerable populations are well-served to follow these precautions. Just as people can choose not to get on a motorcycle, the vulnerable and cautious can engage in voluntary masking and social distancing.

The risks and benefits of living normally can be borne by those who want to live.

No one likes to be told what to do, whether by a bully cop or a bully doctor in a white lab coat. This is especially so when the people doing the telling have done so in the form of arbitrary decrees after mayors and governors have handed over the keys to their public health experts.

No one elected Anthony Fauci or the freakishly unhealthy-looking public health commissars in Los Angeles and Pennsylvania. No one asked us if we would endure universal masking or indefinite shutdowns on their say so. And, to the extent we were asked to give our consent for any of this, our consent for a lockdown was procured using false pretenses about its necessity, duration, and severity.

By channeling the frustration and skepticism of the general public, Donald Trump has become the tribune of the people. While there is no obvious reason these issues should fall ideologically the way they do, this is the key to understanding our changing politics. Common sense and the interests of the common people are increasingly opposed to the managerial class, whether in business or government. The next election is evolving into a referendum on managerial expertise. A choice between sterile safety secured by expert rule, or common sense and freedom.

In other words, while the virus may be a unique and novel threat, the next election – like the one in 2016 – will fundamentally be one about who we are. We have the chance to affirm that we are the same nation that one reads about in history books, a nation of Americans defined by their love of freedom.