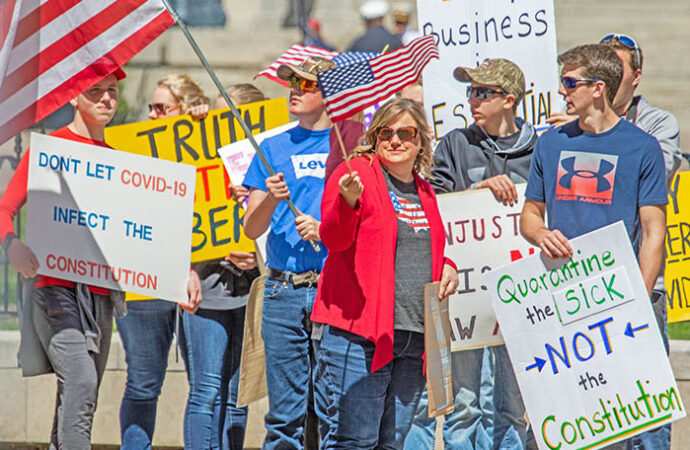 In time of crisis it’s inevitable that people begin to fear. It’s also likely that politicians will utilize that fear to coerce the populace into accepting further government control over their lives.

Of course, the most recent stream of societal fear on which our leaders have capitalized is the COVID-19 pandemic. While the models have been inconsistent at best and intentionally deceitful at worst, the fear of death can drive rational thought to the background as everyone seeks safety.

Too often humanity has traded their liberties in for safety and an easy dollar.

Luckily, we are beginning to see Americans push back and challenge the incremental totalitarianism pushed upon them.

This battle has raged in Virginia for some time, as Pedro Gonzalez depicts in stunning detail in the June issue of Chronicles. Long before the coronavirus darkened Richmond’s doorstep, Gov. Ralph Northam was engaging in the fear-mongering that has been a specter in American politics for years, gaining intensity with every school shooting as politicians push gun-control in the midst of tragedy and confusion.

Crowing over his party’s seizure of the Virginia General Assembly in November 2019, Northam promised supporters he would make the Second Amendment little more than an empty casing, devoid of any power to allow citizens to protect themselves – especially from the government. Such a fear is ill-founded and would never be found in America… except, as Gonzalez reports, when law enforcement’s siege engines roll onto the capitol mall to monitor thousands of Virginians as they peaceably assembled to petition their government for redress of grievances.

These protestors, and the sheriffs and county governments totaling most of the state of Virginia, informed Northam they would not enforce any unconstitutional laws. These citizens and leaders standing up for their own rights and the rights of others have the proper view of America, its founding, and its legal system.

Now with a worldwide pandemic consuming the majority of the news cycle, it’s even easier for governors to seize power and deny liberties, and perhaps harder still for the ordinary man to fight against such actions by the men and women who swore to uphold the constitution.

But fight they do.

Northam’s dreams of grandeur continue in the midst of disease, as he keeps businesses in Bristol, Virginia shut down, while those just across the street in Bristol, Tennessee stay open thanks to the advantages of a more respectful state government. Thankfully, some of his overreach has been noticed by the Justice Department, who sided with a church pastor whom Northam threatened with fines and jail time for gathering 16 congregants in a church with a 293-person capacity.

In Michigan, the protests against Gov. Gretchen Whitmer’s arbitrary distinctions between “essential” and “non-essential” businesses continue, as do the lawsuits.

Other governors are discovering that their power grabs in time of fear aren’t holding up. In Wisconsin, the state Supreme Court threw out a stay-at-home order issued not by Gov. Tony Evers, but by an unelected, unconfirmed secretary-designee. Next door in Minnesota, Gov. Tim Walz announced that restaurants and bars would be allowed to reopen with an outdoor seating limit of 50 patrons, but that religious gatherings were limited to 10 people. Catholic and Lutheran churches rebelled, causing Walz to reconsider and allow churches to reopen at 25 percent capacity, up to 250 people.

The use or attempted use of compulsive force to ensure citizens’ compliance with arbitrary, capricious, and frequently poorly defined executive orders seems to run directly contrary to the principles of government that the founding fathers set forth in the midst of their fight against the tyranny of the British crown, and the subsequent establishment of the United States and its government.

In a 1787 letter to Uriah Forrest, Thomas Jefferson wrote:

“[A]nd say finally whether peace is best preserved by giving energy to the government, or information to the people. This last is the most certain and the most legitimate engine of government. Educate and inform the whole mass of the people, enable them to see that it is their interest to preserve peace and order, and they will preserve it, and it requires no very high degree of education to convince them of this. They are the only sure reliance for the preservation of our liberty.”

When did compulsion take the place of information educating the public?

As we are starting to see during this government-mandated lockdown, a few voices standing up to tyranny may make the difference for many. Unjust and unlawful policies will fall, but they need to be challenged first.

How many more ordinary Americans will start to push back against the injustices they see in their cities, counties, and states? And if every American citizen does so, how soon might this unprecedented incursion of governmental control come to an end?