Notes From the Asylum on the CARES Act 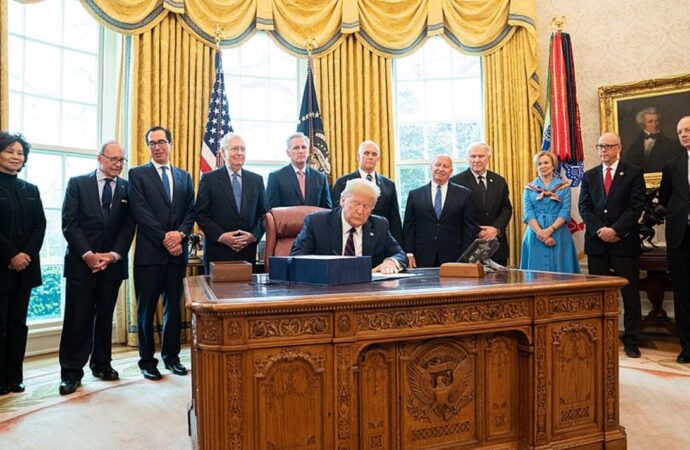 When it comes to economics, I must be dumb as a stump.

Like many others, I received a letter from The White House this past week announcing that I would receive $1200 from the Coronavirus, Relief, and Economic Security Act (CARES ACT). The CARES Act is bringing “this $2.2 trillion in much-needed economic relief to the American people.”

Though I support President Trump in general, I have some questions about the CARES Act and the letter itself.

First, the letter states, “Our top priority is your health and safety.” Because of this shutdown, like tens of millions of Americans I have spent a couple of months in a state of semi-depression. What’s healthy about that? And safety? Shouldn’t my safety depend for the most part on my own common sense?

Next the letter boasts of waging “total war on this invisible enemy.” Throughout my lifetime, I have witnessed other such “wars” like the war on poverty, the war on drugs, and the war on illiteracy. Did our government win those wars? Funny, but I don’t recollect any victory parades.

Then come these words in the letter: “we are also working around the clock to protect hardworking Americans like you from the consequences of the economic shutdown.”

One of my daughter’s friends is a wine salesman with a large family. He’s been out of work for two months and remains so at the moment. Here’s a man, a hardworking American, who needs help.

But me? What did I do to deserve this generosity? I receive a small Social Security check every month, and I continue to work six or seven hours a day seven days a week writing articles for magazines, newspapers, and online outfits. I live a frugal life, mostly because at my age my wants are few. I’m saving a little money and making my way. So why give a guy like me $1200?

The letter then declares “We hope this payment provides meaningful support to you during this period.” So far, like many people I know, I have by hook or by crook – okay, by hook – provided my own meaningful support.

Was this letter some sort of political campaign to garner votes? Indeed, why send out this letter at all?

The last part of the letter is encouraging, with its reminder that “America’s drive, determination, innovation, and sheer willpower have conquered every previous challenge—and they will conquer this one too.” Agreed, if we can ever get some of the states to reopen schools, churches, and businesses, and let us go back to our lives.

And then there’s the question of what I should do with this $1200.

I am hoping to visit Italy this year and write articles about the museums, the art, the people, and even the politics. When I contacted the wonderful hotel where I stayed five years ago, expressing my sorrow that the Italians were so hard hit by the virus, wishing the staff well, and expressing my interest in a return stay, one of them wrote a thank you email to me, adding they would give me a “very special rate.” So I could use my CARES money for that excursion and help bolster the economy of a people I came to love.

On the other hand, I could apply the money closer to home by helping pay for braces for some of my grandchildren. That gesture would help spread dollars through our local economy.

I could also take a bit of the money and give it to the family of that wine salesman, a guy I’ve never met but who clearly needs help.

Or I could contribute a hefty chunk to some political candidate who promises to rein in government and our outlandish spending. This gift would be ironic, using bucks from the federal government to fight such spending, but given what happens to so many politicians when they plop down in Washington – they fail to follow through on their promises – it would probably be money down the tubes.

Years ago, my 10-year-old and I moved to an apartment in Asheville, North Carolina. One morning we were walking to my car when a tattooed and pierced man with blue hair wearing a bathrobe passed us on the sidewalk. My son looked up at me and said, “Sometimes I feel like I’m living in a dream.”

For several years now, here in America, and particularly right now, I sometimes feel like I’m living in a nuthouse.

And I’m not laughing.