In Dealing with Flynn, Comey’s FBI Acted Like the KGB 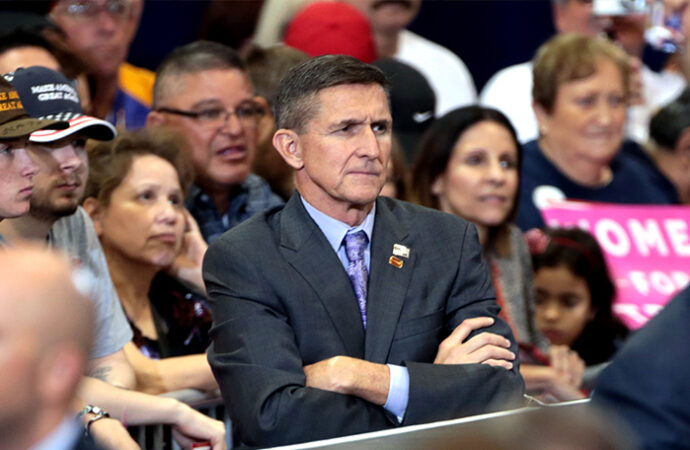 Michael Flynn was vindicated last week. While conservatives tend to be pro-law enforcement, here they are reminded of how the government’s criminal justice apparatus can be abused. The Russian collusion hoax weaponized our intelligence agencies and the FBI to spy on a political campaign and ruin the lives of numerous patriots, including decorated American general, Michael Flynn.

Worse, documents obtained by Flynn’s new defense team show the absence of a crime – he apparently forgot some details in an interview with FBI agents, which to their minds became “obstruction” and “perjury” – but also show that the FBI knew there was no crime and still planned to entrap him through an ambush interview in the early days of the Trump administration.

The Logan Act offense that justified his interview was a pretext; that law has been sitting on a shelf since 1799 and was dusted off to trap Flynn. Every journalist and lobbyist in Washington, D.C. is probably guilty of a violation. The real goal was to get him to talk to the FBI without counsel present, a situation that inevitably leads to some mix-ups and forgetfulness, so that he could be fired.

Once removed, he would not be positioned to discover how much the Obama Administration had weaponized intelligence against domestic political enemies. With the threat of a long prison sentence hanging over him and his family, Flynn would then be positioned to work against Donald Trump.

Obama Holdovers Wanted to Use Flynn to Get to Trump

Flynn was not popular with the Obama Administration. He was critical of Obama’s Iran policy and, after leaving the military, became a conservative activist.

According to a long profile in Politico, “Flynn warned that the United States was actually less safe from the threat of terrorism in 2014 than it was prior to the 9/11 attacks. In remarkably blunt comments for a general still in uniform, Flynn admitted to feeling like a lone voice inside an Obama administration that seemed to believe that the 2011 death of Osama bin Laden had signaled the end of radical Islamist terrorism as a seminal threat.” Everyone hates you when you’re right.

The interview and charges against Flynn were contrary to all ordinary procedures. Holdover apparatchiks in the FBI, including the infamous Peter Strzok, made up the small clique running the Crossfire Hurricane investigation during 2016. They circumvented normal procedures to interview Flynn at the White House, asking about conversations they had already recorded and failing to alert him as to their investigative intent.

Recently released memos detail a “discussion that took place about Flynn, writing: ‘Truth/Admission or to get him to lie, so we can prosecute or get him fired.’ No constructional protections were afforded Flynn, who was even advised by the FBI not to bring a lawyer when he was questioned by agents.” This was approved by FBI Director James Comey after agents engaged in electronic and other surveillance had reported on January 4, 2017, that Flynn was not working for Russia.

As someone who embarrassed the Obama Administration, Flynn functioned as a sacrificial lamb for Trump haters in the deep state. The hope also was to use him as a snitch, the usual modus operandi for federal law enforcement. They played hardball games more typically reserved for drug kingpins – threatening to indict family members and otherwise ruin the accused – until he broke and pleaded guilty to a single count of obstruction.

Worse, his own lawyers may have misled him because they had a conflict of interest. The FBI claimed that Flynn should have registered as a foreign agent under the Foreign Agents Registration Act, and the same law firm handled these FARA paperwork filings in connection with Flynn’s private lobbying work.

The special counsel’s prosecutors and Flynn’s former team of lawyers also withheld information from the court related to details surrounding the plea, contrary to their duties as attorneys. The details are still forthcoming, though much can be learned in Flynn’s recently filed motion to set aside his guilty plea.

Entrapment Used Against an American Hero

This was all, quite simply, entrapment. The FBI is supposed to investigate crimes, not create them. Unfortunately, entrapment by federal law enforcement is fairly common. We don’t usually notice it very much, because most often the entrapped are extremely unsavory characters and few can have pity on them.

The last Supreme Court case on entrapment, for example, involved child pornography; there, postal inspectors solicited the defendant many times for over a year until he took the bait. More recently, many of the high profile terrorist plots that were thwarted during the Bush years involved egging on mentally disturbed people to participate in plots dreamed up by their FBI counterparts.

The FBI gave money, weapons, and encouragement to the unemployed and mentally ill Sami Osmakac, before foiling his “plot.” Right-wing terrorist Jerry Varnell was a diagnosed paranoid schizophrenic, who had earlier been found “mentally incompetent by an Oklahoma Court.” But the news and the public mostly breathed a sigh of relief that “a terrorist plot was foiled.”

While it’s not quite as robust as popular culture would suggest, entrapment is still a defense. If someone is not disposed to commit a crime, the police do not have a mandate to push him to commit one he never otherwise would have committed. For example, the police can’t give a homeless person a million dollars and ask him to steal a car. In the case of Flynn, you can’t ask a bunch of confusing questions of someone about random subjects, and then take the slightest discrepancy to announce, “Gotcha!” Not only is it entrapment, but it fails the materiality test of the federal obstruction statute.

Here, setting aside the numerous problems with the ambush interview of Flynn, there is little doubt that Flynn was guilty, at most, of having a faulty memory of this call.

The Whole Investigation Was Fake

Flynn is one of the many victims of the Russian collusion hoax. The feds also pursued low-level campaign volunteer George Papadopolous, even when he denied any collusion to confidential sources. (The FBI, of course, left this tidbit out of their FISA warrant applications.)

Similarly, the FBI used fraudulently obtained FISA warrants to listen to Carter Page’s phone calls, read his emails, and pry into his life for nearly a year. They trashed him in the press, even though they knew with certainty he had previously assisted the FBI in a counterintelligence investigation, had helped the CIA as source, and was a graduate of the U.S. Naval Academy.

Flynn had an even more distinguished career. At the height of the war on terror, he was the head of intelligence for both the Joint Special Operations Command and the U.S. Central Command. He concluded his career as the three-star general director of the Defense Intelligence Agency. In 2014, he ran afoul of the Obama Administration, which wanted to downplay Islamic terrorism after the killing of Osama bin Laden. He became a critic of the administration from the outside, particularly for its Iran policy. His partisan tone miffed his colleagues, some of whom went on to criticize Trump in partisan and unhinged ways.

When Trump was nominated, Flynn eagerly accepted a White House offer to be a national security advisor. He and Trump agreed on the need to change the direction and tone of our foreign policy. This goal was no secret; it was a key distinguishing feature between Hillary Clinton and Trump. Hillary was the voice of the establishment, committed to the Obama legacy on foreign policy and much else.

This is what elections are supposed to be about: a choice of the American people between people and policies. Instead, Flynn was set up – not for a crime, but to get him fired and in a position to help prosecutors snare Trump. They had nothing. They knew they had nothing. They didn’t care. They put their ideological goals above individualized justice. In the Soviet Union, this indifference to individual rights was grandiloquently labeled “class justice.”

It is hard to overstate the damage this has done to the country and the FBI’s reputation. Serious people are flirting with the idea that the FBI should be abolished altogether. In 2016 and 2017, the FBI (along with the NSA and CIA) perpetrated KGB-style interference with an orderly, peaceful transition of power after an election. Contrary to their self-image, they are not the conscience of the nation. They have no role in the “checks and balances” scheme of our political institutions. They are public servants, and they serve the executive branch in spite of their protests of independence.

What happened to Flynn is quite simply an atrocity. Everyone responsible should lose their jobs, if Flynn’s lawyers betrayed their client they should be disbarred, and the whole crew of plotters should be hauled off to jail. And Michael Flynn deserves his job back.