A Robot Parent Can Now Raise Your Kids 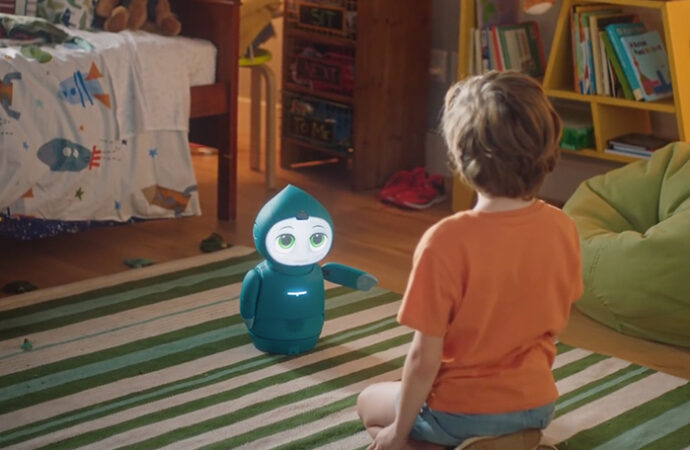 Parents overwhelmed with caring for their children as the coronavirus pandemic continues to cancel school and all of their children’s other activities can take heart. A new robot arriving this fall will handle your parenting duties.

Meet Moxie, the new dystopian product from Embodied, Inc. The sound you hear when this robot boots up in Embodied, Inc.’s advertisement even sounds vaguely like it belongs in a science fiction horror movie.

Moxie is a diminutive teal-colored robot which supposedly allows kids to “engage in meaningful play, every day, with content informed by the best practices in child development and early childhood education.”

Kids are assigned missions covering social, emotional, and conversational skills, while also being taught friendship and problem solving. Parents are able to monitor their kids via an app on their phones, and schedule key events such as the first day of school and dentist visits into Moxie. In essence, many of the normal tasks of raising kids are delegated to a robot who will teach them breathing exercises and meditation and allow kids to talk about their problems “without fear of judgement.”

How low have American parents sunk that they would rather shell out $1,500 for a robot, and $60 a month for its services, instead of actually parenting the children they brought into the world?

In a time where more than one in four children already live without a father in the home, pushing parental responsibilities onto a hunk of plastic and computer coding verges on abusive. Topics such as emotional intelligence and dealing with life’s problems are ones that cannot, and should not, be handled by computers.

In the advertisement, a child, Riley, reads stories to Moxie, completes missions such as drawing and writing notes, and most terrifyingly, talks to the robot about an argument with a friend, a visit to the dentist, and holds Moxie’s hand when the robot proffers it.

Children don’t need to be able to talk about their day “without fear of judgement.” They need to learn how to make proper judgments. They need to be instructed when something they did was wrong, when they need to stand up for themselves, and how they can better handle situations going forward. That is not something that a robot can do, and even if it could, it is not the purview of technology companies to teach our children how to handle such situations.

People reach adulthood and maturity by learning from others and learning from their own mistakes. If kids cannot engage with their parents, they will not grow into the functioning adults that society needs. While much has been made of the problems of helicopter parents, Moxie is a step too far in the opposite direction. Not so much a step, in fact, as the experience of hitting the accelerator instead of the brake at a crucial time.

Moxie’s team boasts of being composed of “experts including engineers, roboticists, neuroscientists, child development specialists, and creative storytellers.” Mad scientists all of them.

Parents who would replace themselves, or their children’s playdates, with a robot are engaging in the height of selfishness. If you are too busy, too preoccupied, too unwilling to listen to your child’s problems, you need to reevaluate your priorities.

“If human beings are perceived as potentials rather than problems, as possessing strengths instead of weaknesses, as unlimited rather than dull and unresponsive, then they thrive and grow to their capabilities.”

Perhaps instead of letting a robot raise our children and tracking their progress on an app on our phones, we should let Moxie’s very existence serve as call to action for all American parents.

How is your child doing today?