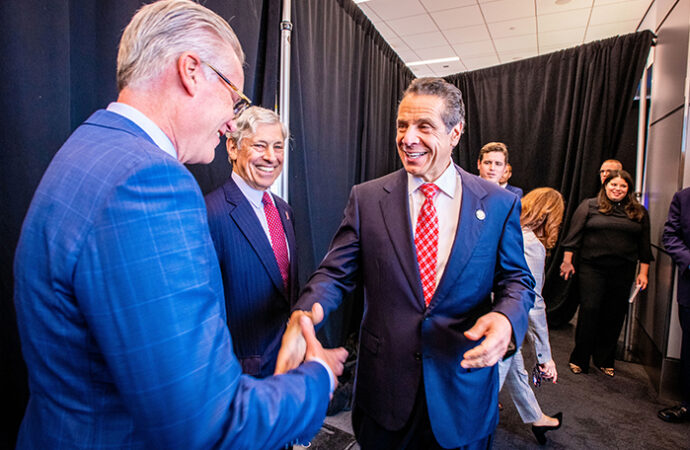 Some White House advisors like Anthony Fauci have often acted as if they were in a position to dictate to states whether or not states mandate “social distancing.” But neither the President or his advisors have ever demonstrated they actually have the legal authority to set state and local policies in these matters.

Indeed, Donald Trump appeared to quite clearly defer to states on these matters since the COVID-19 Panic began in March.

Oddly, the President reversed himself on deference to states earlier this week, and has begun claiming the authority to set policies on forced economic shutdowns for all states. The claim came in response to efforts by state governors who seek to set their own timelines and methods for eliminating social distancing orders and other forced shutdowns of local businesses and enterprises.

Specifically, New York is leading a coalition of several states including Massachusetts, Rhode Island, New Jersey, Connecticut, and Pennsylvania in “coordinating” a scaling back of the economy-paralyzing orders. California is leading a similar pact among West Coast states.

Apparently not inclined to allow these states to act on their own, Trump at an April 13 press conference insisted he will decide when states scale back social distancing orders and declared “when someone is president of the United States, the authority is total.”

It’s not unusual for presidents to insist they can do whatever they want, whether publicly or privately.

What is unusual now is the way leftwing politicians and media organization have reacted.

For decades, the dominant narrative on the American left, and among national media outlets, has been that there is essentially no limit to the power of the federal government over states, municipalities, and over individuals. From financial bailouts, to healthcare, to vaping, to air pollution, to schools, and more, it is simply assumed that if the federal government wishes to regulate, subsidize, fund, or otherwise meddle in some aspect of life, Congress or the President need merely wish it.

The idea that the U.S. constitution limits these powers, of course, is treated as quaint, or worse. For decades, those who suggested government powers – on any matter – ought to be decentralized to the states (or to local governments) have generally been denounced as seeking nefarious ends, such as the re-introduction of slavery. It has long been assumed that people who want a more activist federal government are progressive and enlightened. Those who want decentralized and localized government are, on the other hand, are assumed to troglodytes.

Suddenly, the American left thinks America needs to take the federalism of the U.S. Constitution very seriously, and even embrace the Tenth Amendment which strictly limits federal powers to those explicitly listed in the Constitution.

For example, in an April 14 segment on CBS, the host began by stating “we know, in fact, this falls to governors” when describing the process of ending government-forced lockdowns. Rarely has a claim of state sovereignty – sometimes inaccurately called “states’ rights” – been stated with such certainty and finality by a major media company. During the segment, New York Governor Andrew Cuomo goes on to insist his state government need not take direction from the Trump administration because “The president’s position is …absurd … we don’t have a king, we have a president.”

Similarly, in an NBC segment on the topic, the NBC presenter immediately followed Trump’s claims of “total authority” over state lockdowns with a declaration that “In fact, the constitution gives that power to the states.”

Until this week, insisting that the tenth amendment to the U.S. Constitution limits federal powers was likely to get someone branded as some kind of “neo-confederate” by leftwing activists. Yet now the Governor of New York is apparently a devotee of the Amendment’s limitations on federal power.

The tenth amendment, for those unfamiliar with it, is the much-ignored final article of the Bill of Rights which states “The powers not delegated to the United States by the Constitution, nor prohibited by it to the States, are reserved to the States respectively, or to the people.”

The amendment is so often ignored – by both federal judges and politicians – because it is so inconvenient to them. The powers delegated to the federal government and are and specific. Thus, what the tenth amendment says is most everything done by government shall be done at the state or local levels, or not done at all.

There would, of course, almost certainly still be state- and local-level welfare programs, prohibitions, regulations, and public lands. Yet so devoted have major media organization and leftwing ideologues been to dismissing any attempts at decentralization and limitations on federal power, it has long been assumed in the national media narrative that all these government powers can be and should be done primarily at the federal level.

Now, in an effort to oppose the Trump presidency, a number of governors have embraced what they’ve spent much of their careers denouncing: decentralization and the tenth amendment.

The opposition to federal control this week was so fierce in fact, that by Wednesday morning, Trump had backtracked on his claims of “total authority.”

But the sudden turn toward decentralization didn’t stop there. In a column for Reuters yesterday, Rob Cox suggests that maybe a “Great American Breakup” isn’t such a bad idea:

It started with the abdication of leadership in Washington in coordinating an effective public-health response to the spread of the Covid-19 disease, followed by threats from President Donald Trump to override states’ rights. It’s all fodder for arguments that the United States has become too big to manage – and several U.S. states just provided an alternative blueprint worth considering.

Suggestions of radical decentralization of this sort have apparently been appearing with increasing frequency in recent years. State governments increasingly talk about nullifying federal drug laws, gun laws, health care laws, and more. As the Scots and the Brits talk about seceding from larger political entities, some Americans are increasingly suggesting the time has come for some American states. It is likely premature to describe such talk as “mainstream.” This week’s flare-up in demands for more state sovereignty, however, does suggest an escalation, and is notable for the casualness it is being bandied about by high level media outlets and politicians.